Throughout a cell’s life, its genome can become damaged by external and internal sources including reactive oxygen species and radiation (e.g ionising radiation; IR). To prevent any damaged DNA persisting and causing a faulty copy of the genome to be passed across generations, cells have many pathways (collectively called the DNA damage response; DDR) in place to tackle DNA lesions, including the use of cell cycle checkpoints. These ‘molecular borders’ can be activated when the cell detects a DNA abnormality. Checkpoints occur at different strategic points during the cell cycle, for example at G1/S, during S-phase, G2/M and at the point of mitotic spindle assembly (Spindle Assembly Checkpoint; SAC) in most Eukaryotes and in many different cell types (1). In primordial germ cells (PGCs), which form the basis for adult germline cells in male and female mammals such as humans and mice, less is known about the workings of the DDR but previous studies support the presence of a robust DDR as germline mutations in adults could be catastrophic for offspring (2,3). Here, Bloom and Schimenti use PGCs from two different stages in mouse development, before the embryo sex is decided and after sex-determination, revealing differences between checkpoint usage before and after sex-determination in PGCs during DDR activation.

To study cell cycle dynamics in PGCs in the presence and absence of DNA damage, the authors used pregnant transgenic mice carrying GFP fused to a transcription factor (Oct4). This means GFP expression is restricted to PGCs. Next, these mice (and their embryos) were exposed to 5Gy IR, prior to sex-determination (at E11.5 stage). After 8hrs, the foetal gonads were dissected, and the cells prepared for flow cytometry. By selecting GFP positive cells and looking at their DNA content, the authors show IR exposure doesn’t elicit a strong G1 cell cycle checkpoint. Instead, PGCs accumulate in G2/M. 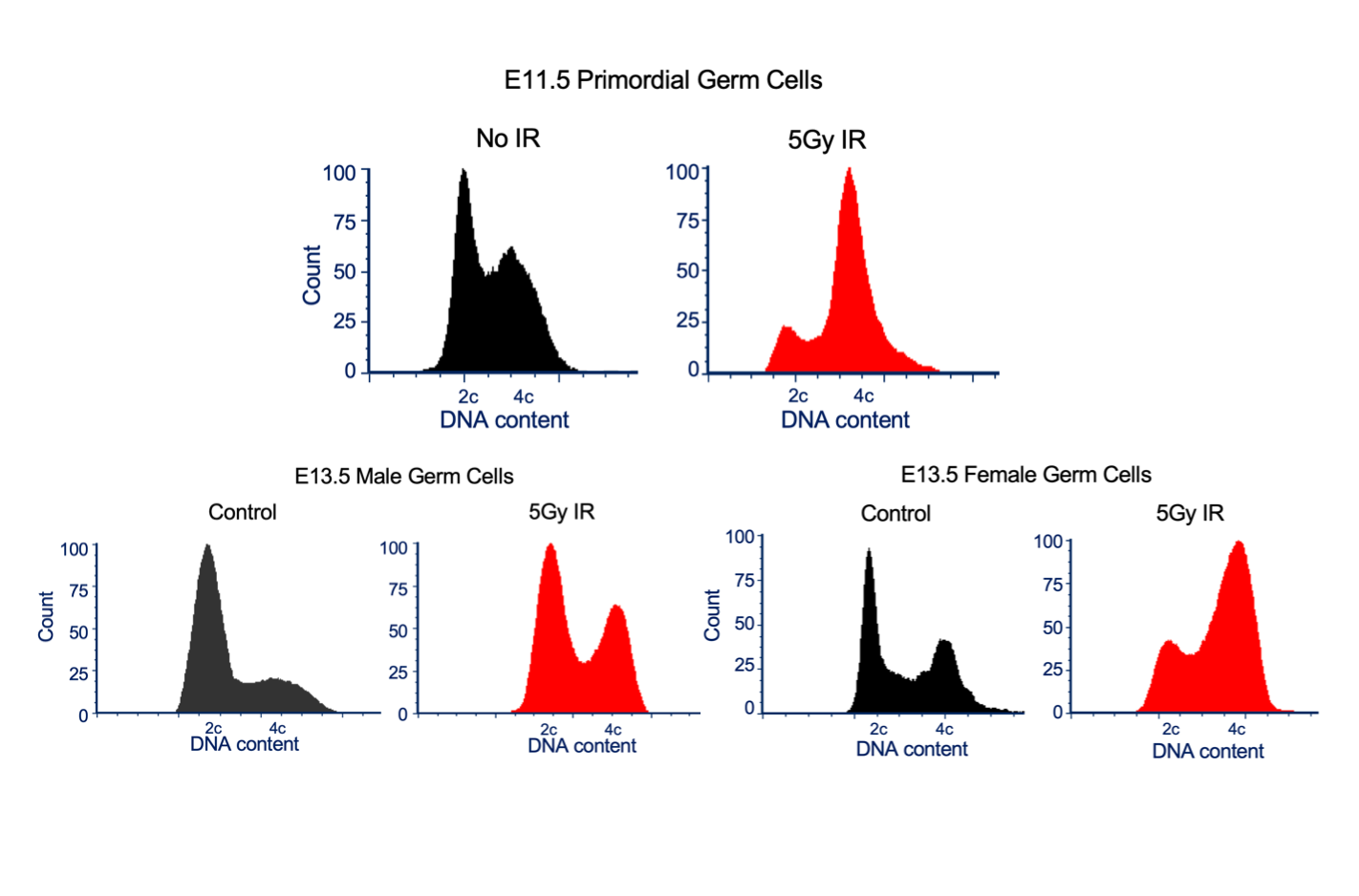 Figure shows a selection of data from Bloom and Schimenti. FACs plots show the DNA content of germline cells at taken at different mouse developmental stages (E11.5 and E13.5) in the presence and absence of 5 Gy IR exposure. Plots taken from Fig.1A, 2A and 4A. Figure reproduced under a CC-BY-NC-ND 4.0 International license.

Next the authors examined transcriptomes of PGCs under several conditions to ask how IR treatments influenced gene expression before and after sex-determination in the PGCs. First, gene expression in E11.5 PGCs (prior to sex-determination) was examined in the presence and absence of IR 4hrs after treatment. Approximately 300 genes were differentially regulated. Up-regulated genes were likely involved in cellular communication, apoptotic pathway activity and population maintenance.

Next, the authors used RNAseq to examine differences in the transcriptomes of E13.5 PGCs (a stage after sex-determination). By comparing male and female germline cells in the presence and absence of IR treatment, they reveal several differences between the sexes. First, the authors examined male germline derived cells. They found male germline cells can establish a G1 checkpoint when exposed to IR. IR treatment also down-regulates Piwi-interacting RNA (piRNA) expression. piRNAs are non-coding RNAs which contribute to the silencing of transposable genome elements. This suggests male germline cells are more prone to invasions by transposable elements which could undermine genome stability if too many occur unchecked. Whereas, in female germline derived cells, no clear mitotic G1 checkpoint was activated following IR exposure. Instead, IR treatment down-regulated genes associated with pluripotency and an up-regulation of genes associated with retinoic acid (RA) responses. RA (a vitamin A derivative) was shown to trigger meiosis in female germline cells (4) though recently, RA is thought to be dispensable for this purpose leading to questions on the exact role of RA (5). The authors’ data suggests IR treatment of female germline cells causes them to differentiate early but not to enter into premature meiosis supporting the more recent findings regarding RA. They propose that a master regulator of meiotic entry, known as Stra8 (stimulated by retinoic acid) is activated early in response to IR treatment which stops meiosis from beginning in the differentiated cells.

To ask what happens when checkpoints are not activated in response to DNA damage in germline cells, the authors performed whole genome sequencing on spermatids from a checkpoint deficient mouse line. In these mice, a factor from the Fanconi Anaemia (FA) complex (fancm; 6) and p21 (a factor which induces cell cycle arrest) were deleted using CRISPR/Cas9 engineering. Deleting p21 partially rescues male germ cell production but still the mice are deficient in checkpoint activation after DNA damage exposure. They found mutations accumulate in germline cells in the double mutant mice (no fancm or p21), when compared to control mouse lines. What is interesting about this finding is that it’s only recently been shown that the FA pathway and its ability to repair intra-strand crosslinks is important for PGCs before they enter meiosis (3). That study shows ‘repair-defective’ PGCs are removed so they can’t pass on serious mutations to the next generation.

Understanding how PGCs deal with damage is very important in the context of understanding complex fertility complications and also can be taken in the context of genetic disease transmission. Here, the authors asked what sort of response PGCs take when confronted with DNA damage. Using a combination of approaches, including whole genome sequencing, the authors tackle their questions clearly considering their findings in the context of other published studies. Their data will open up a lot of novel routes of investigation.

Thank you for your questions!  I will do my best to respond to them as well as I can!

1) Could you comment on how your findings regarding RA may fit with the recent reports that RA may not be needed for meiosis entry stimulation in germline cells?

I think this question might be referring to the recent Science paper by Nagaoka et al. entitled “ZGLP1 is a determinant for the oogenic fate in mice” in which the authors report that meiotic entry can occur in the absence of RA in cultured PGC-like cells.  We had not previously considered relating our study to this report, but it is definitely a thought-provoking question.  Interestingly, in our RNA-seq dataset, Zglp1 is not differentially expressed in response to ionizing radiation.  Therefore, our study may lend additional in vivo support for the model described by Nagaoka and colleagues.

2) Are spermatids from the mutant genotypes viable?  Would the resulting male mice be infertile or generate non-viable offspring?

Yes, germ cells from both Fancm single mutant and Fancm p21 double mutant mice are capable of producing viable offspring.  Both genotypes of mice are sub-fertile, but fertile nonetheless.  Thank you for this question as I think this is something we should clarify in a revised version of the preprint!

3) What is activating the G1 checkpoint in the male germline cells? Could it be a similar pathway to what is seen in somatic cells at the G1 boundary? Do you see DNA pathways emerging in your RNAseq datasets?

4) Do you detect any evidence of intra-strand cross link lesions in the double mutant germ cells?

The exact nature of the lesions in Fancm-deficient germ cells is unclear.  We hypothesize based on the highly proliferative nature of these cells that the lesions are DNA replication-associated.