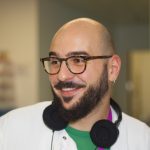 The intestinal mucosa is home to a great number of immune cells; the vast majority being intraepithelial lymphocytes (IELs), a heterogenous population of cells that reside between intestinal epithelial cells (IECs), differing in their developmental pathways, but sharing a similar transcriptional program and phenotypic characteristics (such as the expression of CD8αα). One of such subsets is composed by the CD4+ IELs, derived from conventional CD4+ T cells (Tconv) and regulatory T cells (Tregs) that gain access to the gut epithelium. Similar to other lymphocytes, IELs bear a rearranged T cell receptor (TCR), which endow them with the capacity to respond in an antigen-specific manner. However, the role of TCR in IEL differentiation and function remains unknown.

The differentiation process of CD4+ IELs leads to clonal expansion

In order to understand if peripheral CD4+ T cells conversion into IELs involves specific TCR usage, Bilate and colleagues employed a transgenic mouse model in which inducible Cre recombinase expression permanently tags cells that at some point expressed Foxp3 (the master transcription factor for Tregs) and a constitutive Foxp3-reporter transgene allows the identification of cells expressing the transcription factor at the time of the analysis; coupling the dual reporter activity with cell surface CD8αα expression, the authors sorted Tconv, Tregs, and CD4+ IELs originated both from Tconv (cIELs) and Tregs (ex-Treg IELs) for subsequent single cell TCR sequencing. Analysis of clonal distribution showed a diverse TCR repertoire for Tconv and Tregs. Interestingly, the authors observed substantial clonal expansions for both cIELs and ex-Treg IELs. Furthermore, in addition to clone sharing between different intestinal compartments, a number of expanded clones were shared between cIELs and ex-Treg IELs, suggesting Tconv precursors arriving in the gut can end up having multiple fates.

By employing single cell RNA sequencing (scRNAseq) coupled with TCR sequencing analysis, the authors then sought to address how TCR diversity correlates with the observed plasticity of the system. Trajectory analysis showed that three different pathways lead to generation of IELs, which in turn represent a final stage of differentiation, irrespective if from Tconv or Treg origin. Interestingly, clonal expansion increases as cells undergo differentiation towards IEL program, but only achieves its maximum dominance when cells become fully differentiated IELs.

The reported focusing of the clonal repertoire in the IEL population indicated that TCR signalling could be important during the differentiation process. In fact, the scRNAseq data also revealed that during their differentiation IELs loose the expression of several genes involved in TCR signalling, whilst acquiring genes from the IEL program (for a more detailed analysis, check the preprint by London and colleagues). In addition, by using a Nur77-reporter mouse model, the authors found that IELs and pre-IELS express decreased levels of Nur77 (a molecule downstream TCR activation) when compared to Tconv and Tregs. Thus, suggesting TCR signalling is important in the early steps of IEL differentiation. This hypothesis was confirmed by genetic ablation of TCR specifically in Foxp3-expressing Tregs and OX40-expressing cells (a molecule involved in TCR signalling and expressed in Tregs and activated Tconv); in both cases loss of TCR resulted in a decrease in IEL population. Moreover, by using a similar approach and specifically and temporally deleting MHC-II in IECs – and thus preventing TCR activation from the other side of the MHC-TCR interaction – the authors observed a specific decrease in IELs. Altogether, these results indicate that TCR activation in peripheral CD4+ T cells arriving in the intestinal mucosa contributes for their differentiation into IELs.

The mouse models employed above allowed for the dissection of the TCR role in the differentiation of IELs; however, if the TCR also contributes to the maintenance of already differentiated IELs remained unknown. Hence, the authors employed a mouse model in which TCR ablation was conditioned by CD8a expression in mature T cells (and not thymocytes), thus enabling deletion of the TCR in CD4+ T cells only after acquisition of the IEL program. Surprisingly, TCR-deficient mice had similar frequencies of CD4+ IELs when compared to control animals. Additionally, TCR deletion did not impact on IEL functional characteristics (such as IFN-γ and granzime-B production), nor in the maintenance of the IEL transcriptional program. Of note reconstitution of lymphocyte-deficient mice with bone marrow cells from TCR-deleted and control animals showed that TCR loss resulted in less competitive disadvantages for CD4+ IELs than to other subsets of IELs. Overall, the data presented here strongly suggests that TCR signalling is dispensable for the homeostatic control of CD4+ IELs.

How specific TCRs contribute to the maintenance and differentiation of the peripheral pool of T cells, is still unclear. This question is particularly important in barrier tissues, where these cells are abundant and adopt tissue-imprinted programs that are key for the maintenance of homeostasis. In this preprint, Bilate and colleagues show for the first time that CD4+ T cells undergo a clonal focusing process in parallel to the acquisition of IEL transcriptional identity. Moreover, this study reveals a previously unappreciated role for TCR signalling in the differentiation, but not maintenance of CD4+ IELs.