Tau aggregation in AD: Changes in cholesterol are shown to affect entry of tau into the cytosol in neurones and human cell lines. 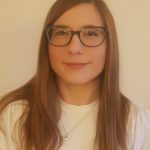 Alzheimer’s disease (AD) is the most common neurodegenerative disease in the world, contributing to approximately 50 million dementia cases worldwide. In AD, Tau, a major microtubule associated protein which promotes the assembly of tubulin into microtubules, becomes hyper-phosphorylated and aggregated into bundles1. This is also true for other related neurodegenerative diseases called tauopathies.

There are two main ways in which tau becomes aggregated within the diseased brain.

It has been shown that the spread between cells may occur by uptake of naked tau, or through membrane-bound vesicles during endocytosis or micropinocytosis. However, how tau is released from intracellular vesicles into the cytosol is relatively unknown. It has been shown that low-density lipoprotein receptor Lrp1 and Heparan sulphate proteoglycans (HSPGs) are involved with tau seeding3,4 but how these may effect tau entry into the cytosol is yet to be known. In this preprint, Tuck et al. designed a novel assay to study entry of tau into the cytosol and established a role for the endocytic proteins clathrin and dynamin, as well as cholesterol, in the tau entry process.

The authors developed a highly sensitive method for the detection of tau entry into the cytosol.  This assay can be conducted in live cells and relies on a split luciferase system. This system is composed of 11 amino acid fragments of luciferase, HiBiT, which is fused to tau, and a cytosolic LgBiT fragment.

When tau-HiBiT enters a cell through endocytosis it is unable to fuse with cytosolic LgBiT fragments until it is released from the intracellular vesicles. Upon release, the LgBiT can form a complete luciferase (NLuc), and with the addition of a substrate, luminescence can be measured. Thus, uptake of tau can be detected via measuring luminescence signal.

The authors found that the NLuc signal was concentration-dependent and increased proportionally to the amount of tau-HiBiT present in the cytosol.  Thus, the authors expressed LgBiT by lentiviral transduction under the mammalian housekeeping promoter and with a nuclear localisation signal. This kept the cytosolic levels low to allow the authors to establish an assay that reports solely on cytosolic intracellular tau. 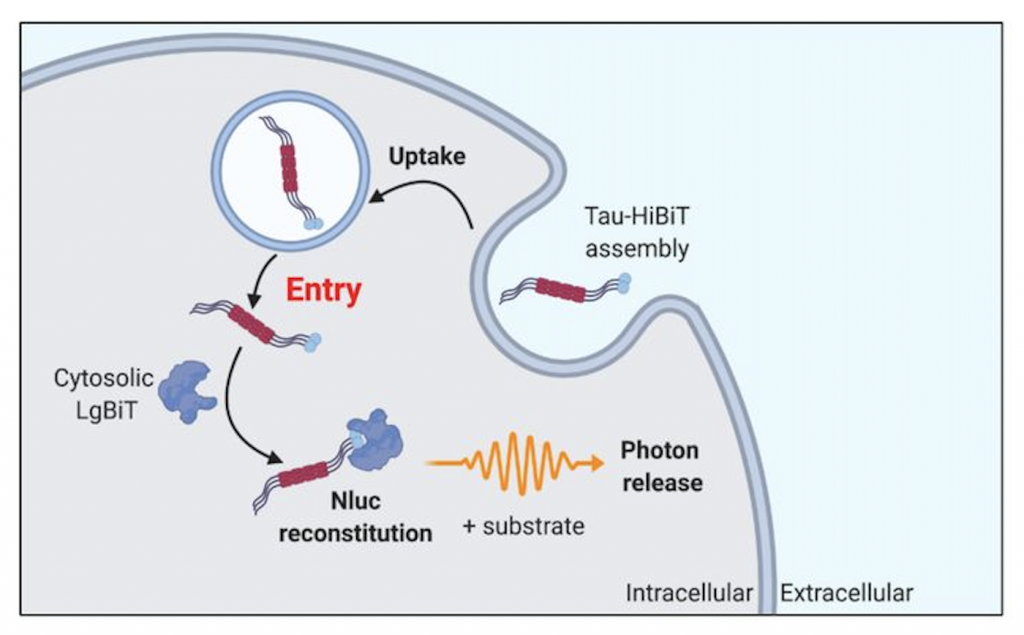 Key points of the paper

Tau uptake and entry into the cytosol of HEK cells is clathrin and dynamin dependent. However, this is cell-type dependent and does not happen in primary mouse neurons.

First, the authors transduced HEK293 cells with tau-HiBiT and inhibited key components of endocytic pathway, coat protein clathrin and GTPase dynamin, using inhibitors PitStop2 and Dyngo4a. The inhibition of these key endocytic protein resulted in reduced uptake of the fluorescently targeted transferrin, a key clathrin mediated endocytic cargo, and reduced entry of tau into the cytosol. This indicates that tau uptake and entry into the cytosol are clathrin and dynamin dependent.

Vacuole Protein Sorting 13 (VPS13) is a ubiquitin binding protein which has been shown to promote the seeded aggregation of tau through endolysosomal escape of tau seeds5. The authors depleted VPS13D in HEK293 cells, which resulted in an increase in tau entry into the cytosol. Similarly, a reduction in VPS35, known to be a genetic risk factor for Parkinson’s Disease and also linked to increased tau burden in late onset AD6,7, was correlated with a decrease in tau entry into the cytosol. These data suggest a role for endosome sorting machinery in preventing tau entry. Together, these data suggest that the endocytic and endosomal pathways are key regulators of tau uptake, entry to the cytosol and therefore tau seeding.

Next, the authors wished to study the mechanisms of tau entry in a more physiologically relevant system and so adapted their tau seeding assay to primary mouse neurons. LgBiT with nuclear localisation sequence and eGFP was expressed in primary mouse neurons using the human Synapsin promoter, a neuronal maker. Results showed that there was no change in entry of tau with the addition of clathrin and dynamin inhibitors, no difference to micropinocytosis, and no difference with knock-down of RAB GTPases in both Day 7 and Day 14 primary mouse neurons. This suggests that the entry of tau into the cytosol in primary mice neurons is mediated by a mechanism which is not clathrin or dynamin dependent.

Lrp1 has recently been identified as a receptor for tau uptake4. The authors therefore wanted to investigate if Lrp1 has an effect on tau entry into cytosol in HEK293 cells. The depletion of Lrp1 corresponded to a decrease in tau entry into the cell 4h after the addition of LgBiT tau. In addition, Heparin, a ligand for HSPGs, cell surface receptors involved in many developmental signalling process and extracellular matrix protein, also reduced tau entry in a dose dependent manner suggesting a role of cell-surface HSPGs in promoting tau attachment.

Cholesterol has been associated with the accumulation of tau filaments in Neimann-Pick disease,8 and the Apolipoprotein (APOE) gene which encodes a cholesterol transporting protein, is also a genetic risk factor for AD9. Knowing this, the authors tested if cholesterol was needed for tau import by using both the cholesterol extracting agent methyl-beta-cyclodextin (MßCD) and cholesterol accumulating agent 25-HC. The extraction of cholesterol from the cell resulted in a significant increase in tau entry into the cytosol, while the accumulation of cholesterol in intracellular membrane bound organelles saw a significant reduction in cytosolic tau. This was also found to be reproducible in Organotypic hippocampal slice cultures10, where MßCD increased seeded aggregation while 25-HC reduced it. Together, this suggests that cholesterol plays a role in the entry of tau into the cytosol. It is thought that cholesterol alters the properties of the lipid bilayers, thus, decreasing cholesterol makes the membrane more prone to rupture and likely increases the entry of tau into the cytosol.

I chose this preprint because the authors have developed an extremely interesting new tool to study the prion-like movement of aggregated proteins found in neurodegenerative diseases. This has the potential to help investigate protein aggregation and seeding in many other neurodegenerative diseases linked to the accumulation of other proteins, such as alpha-synuclein in PD.

Questions to the author.

Has this been tried with IPSC’s such as iNeurons which are a model of cortical neurons? Would you expect tau uptake to be similar to the human cell line or the mouse neurons?

This is an important question and given the different entry pathways between mouse neurons and human HEK cells, it begs the question of which pathway occurs in human neurons. We expect the mouse neurons to be most representative, but will just need to wait and see what the data says.

Could this assay be adapted for alpha-synuclein? Do you think it would have a similar mechanism?

Yes, we think this technique could be applied widely to systems where entry to the cytosol is relevant. Other proteopathies predicted to act in a prion-like manner are one good example. Other systems might include protein toxins that act in the intracellular domain.

Why did you use split luciferase system rather than a split fluorescence protein system?

The problem with working with split FPs is the low (or unknown) affinity between the two components. This means that you get very weak signal when the concentration of one of the components is low. This is the case here, where we apply tau to the extracellular space at nanomolar concentration and only a small fraction enters the cells. It is possible to counteract this by overexpressing the intracellular component to a high level, but we found this leads to accumulation of that component outside the cell and in compartments other than the cytosol. We read about split Nanoluc wherein a complementing peptide had been selected for high affinity interaction with the remainder of the enzyme (Dixon et al 2016 PMID 26569370). It has since been commercialised as HiBiT and (after a lot of tweaking) proved perfect for this application.

Did you check uptake of transferrin or other cargo for each of the manipulations you did? Was there a decrease in uptake which could result in a decrease in entry into the cytosol when you knockdown VPS35?

We have verified the effect of clathrin and dynamin inhibition in HEK cells by transferrin uptake assays in the presence or absence of PitStop 2 and Dyngo 4a, respectively. We use fluorescently labelled (alexa 647) human transferrin protein, and we observed a 80-90% reduction in transferrin uptake to cells when when treated with pitstop or dyngo via flow cytometry. Unfortunately, we were unable to recapitulate this in neurons. We were unable to detect uptake of transferrin in neurons at multiple concentrations via flow cytometry or microscopy. We believe this points towards a less significant role for canonical clathrin/dynamin mediated endocytosis in these primary neurons compared to immortalised cells. As VPS35 acts further down the endolysosomal sorting pathway in the late endosome retrograde transport step, we have not investigated the effect of VPS35 knockdown on uptake. However, this is something we are actively working towards. We plan to use fluorescently labelled tau-HiBiT and flow cytometry-based uptake assays to investigate the effect of these manipulations on uptake. This way, we can definitively correlate the uptake of tau with entry and conclusively confirm that it is the rate limiting step in seeded aggregation.

Are you planning to investigate uptake into the cell vs entry into the cytosol of tau?

It seems that tau can be taken up by a variety of mechanisms, but only seems to escape to the cytosol from a specific subset of these. Now we have the tools to measure uptake and entry as separate events we certainly want to understand how they differ.

Are you interested in investigating early endosome genes BIN1, PICALM and CD2AP which are the most common polymorphisms associated with late onset AD? Would it be interesting to see their impact on the seeding assay?

Yes, this is an interesting point. Others have shown that BIN1 is implicated in tau uptake and prion-like aggregation (Calafate et al 2016). This is therefore a strong contender for promoting cytosol entry. We are keen to run some of these hits through our assays to see if we can help dissect their contribution to late onset AD.