A phylogenomic analysis of Nepenthes (Nepenthaceae) 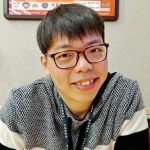 Nepenthes (common name: Asian pitcher plant) is a genus of carnivorous plants that has modified its leaves to form a pitcher-like structure (Fig. 1). The pitcher is attached to the leaf blade by a tendril. The structure is usually filled with fluids that may attract, capture, and digest their animal prey (1). Some Nepenthes species have been known to acquire their nutrients from other sources, such as leaf litter (2) and animal feces from tree shrews (3), rats (4), and bats (5). Their pitcher is also known to host several symbiotic species, such as mosquito larvae (6). 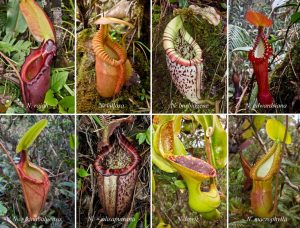 It is estimated that there are 160–180 extant Nepenthes species in the world (8), mostly found in the rainforests of Southeast Asia. Yet, their phylogenetic relationships and species delimitation are poorly understood. Previous studies have been usually limited in the number of samples and loci. In this preprint, the authors used high throughput sequencing to capture 353 nuclear loci of 151 described or putative Nepenthes species and build the most comprehensive Nepenthes phylogeny to date using multiple matrices.

The relationships of five Western outlying Nepenthes species are resolved

Based on their phylogenomic trees, the authors consistently found the Western outlying species as the earliest diverging clades in the Nepenthes phylogeny. In particular, they found N. pervillei (from Seychelles) as the sole sister of all other Nepenthes (Fig. 2). Two species from Madagascar, N. masaolensis and N. madagascarensis, were resolved as the sister to the clade containing Asian Nepenthes. Asian Nepenthes can be further distinguished into South and Southeast Asian clades. N. danseri from Waigeo Island in West Papua is indicated as the sister to remaining Southeast Asian species. The phylogenetic trees produced in this study confirmed the order of these five Western outlying species and N. danseri, which were controversial in previous studies. This result also supports the out-of-Africa hypothesis, which posits that Nepenthes is of African origin and it reached Asia when the Indian plate broke off from Madagascar in the late Cretaceous period (9). 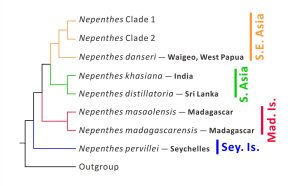 Southeast Asia, as the center of Nepenthes diversity, holds ca. 95% of all known Nepenthes species (7). Other than the six above-mentioned species, the Southeast Asian Nepenthes were always recovered as two sister clades in this study (Fig. 2). Common and lowland species are retained as Clade 1, along with several high altitudinal species from Sulawesi and Papua. Meanwhile, Clade 2 contains some of the most geographically defined clades from Sumatra-Java, Indochina, Peninsular Malaysia, Mindanao, and Palawan. Bornean, Sulawesian, and Papuan species were not as clearly distinguished as other regions; they were found both within Clade 1 and Clade 2. Together, these results indicate that most Nepenthes species have been resolved into well-supported clades and the phylogeny presented here could serve as a guide to understanding the evolution of Nepenthes lineages, especially for geographically-delimited clades.

In this study, the authors also included multiple samples of widespread species in the analyses to account for different populations. It turns out that several species, including N. maxima, N. tentaculata, N. hamata, N. rafflesiana, and N. mirabilis, were recovered as paraphyletic – suggesting that some accessions in these taxa may be a misnomer. The recognition of non-monophyletic species as one species may also indicate cryptic species, i.e. morphologically identical but actually distinct species, in Nepenthes. However, we should also consider the possibility of systematic errors, such as the lack of strong support in individual gene trees and phylogenetic noises, as the cause for non-monophyly of these taxa.

This preprint provides the first large-scale analysis for almost all of the known Nepenthes species using a huge number of loci, resulting in a high-resolution Nepenthes phylogeny. The authors not only resolved some controversial placements across the Nepenthes tree of life, but also clearly identified geographically-delimited clades from Sumatra-Java, Indochina, Peninsular Malaysia, Mindanao, and Palawan. Identification of paraphyletic Nepenthes species in this study also shows potential unknown cryptic taxa that warrant further study. These findings would form the basis for a better understanding of evolutionary processes and taxonomic classification in Nepenthes. Additionally, this preprint also demonstrated the applicability of a recently developed Angiosperms-353 probe kit in species-level systematics.