Which set of genes distinguishes animals from other organisms? Work from the King lab suggests we need to rewrite textbooks. 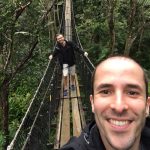 As humans, we are morphologically very different from butterflies or jellyfish, yet we belong together in the phylogenetic branch of Animalia/Metazoa, separate from other multicellular eukaryotes such as plants or fungi. So what makes up an animal? Comparing animal genomes to those of other organisms, especially their closest living relatives, choanoflagellates, can tell us which genes have specifically appeared or disappeared during animal evolution. However, only two genomes of choanoflagellate species have been sequenced to date, limiting the power of such comparisons to identify genes that are truly animal innovations.

The authors sequenced the transcriptome of 19 choanoflagellate species, substantially increasing the available genomic information on these organisms and allowing a more refined comparison to animal genomes. This revealed:

(1) More than a thousand animal-specific gene families (including well-known developmental players such as TGF-β, Hedgehog, Pax and Sox), most of which were lost in one or more extant lineages. Only 36 gene families were found conserved across all animal genomes available, including components of the Wnt pathway and cell-cell adhesion molecules

(2) More than a thousand gene families present in the common ancestor but specifically lost in animals, reflecting changes in ecology and metabolism (e.g. pathways necessary for the biosynthesis of essential amino acids)

(3) Many gene families believed to be animal-specific are actually present in choanoflagellates, indicating that they evolved before the emergence of the animal lineages. These include Notch receptors and ligands, critical innate immunity receptors (TLRs) and enzymes involved in extracellular matrix remodelling.

Not only the fact that the authors are asking a BIG fundamental biological question – where we came from, as animals, and what happened along the way, from a genomic perspective – but also that their study ends up challenging the current view of which genes constitute an “animal signature”, probably leading to changes in our textbooks. And who would have guessed how much we could learn from studying… choanoflagellates?! A reminder of how important it is to explore even the more unlikely organisms.

It will be exciting to explore whether gene families common between animals and choanoflagellates serve similar biological functions in the two lineages, or whether they might have been exploited differently. For example, what could be the significance of the Notch pathway in single-cell choanoflagellates?

The authors had to optimise specific growth conditions and RNA extraction protocols for each of the 19 species of choanoflagellates they sequenced!

You pose an excellent question: can we test whether gene families that evolved on the stem lineage leading to animals and choanoflagellates have similar functions in the two groups? The timing of this question is perfect, because a robust method for transfection in choanoflagellates was just developed! It was described in a preprint on bioRxiv (https://doi.org/10.1101/343111) and was even highlighted in a preLight (https://prelights.biologists.com/highlights/robust-method-transfection-choanoflagellates-illuminates-cell-biology-ancestry-animal-septins/). Using the techniques described in this preprint, it should be possible to interrogate the choanoflagellate functions of intriguing gene families that we identified, such as Notch or TLRs.
It’s great that you pointed out the challenges in optimizing lab protocols separately for each of the 19 species we sequenced. When choanoflagellates are isolated from the environment, they are co-isolated with their bacterial prey, which may come from many different species. Each culture thus represents a mini-ecosystem that responds differently to lab manipulation, based on the biology of the choanoflagellate species and on the interactions with and among the diversity of bacterial prey species present. These optimizations were actually one of the most time-consuming parts of the project!