Tackling the TASQ of G4 isolation

DNA is a dynamic molecule capable of forming secondary structures beyond its classical double helix appearance. Such structures include G-quadruplexes (G4). When 4 guanine (G) bases in a region of DNA (or RNA) self-associate and bond to each other via Hoogsteen hydrogen bonds (a variation of Watson-Crick base pair bonding which alters the geometry of the DNA tertiary structure), they form a planar G-quartet. When planar G4-quartets stack in the presence of Na+ and K+ ions, they generate G-quadruplex structures which are 4-stranded arrangements of DNA (1). In recent years, key roles for G4 structures have been described in core biological processes such as the regulation of gene expression. Furthermore, their presence has been linked with genomic instability and correlates with cancer predisposition (1,2). Here, the authors generated two small cell-permeable synthetic ligands capable of interacting with and selectively isolating G4 structures from within human cells.

To generate the ligands synthesised in this study CyTASQ and BioCyTASQ (G4 ligands), the authors designed their compounds based on two previously described reference compounds (PNADOTASQ and BioTASQ; 3,4,5) which are synthetic representations of G-quartet structures (template assembled synthetic G-quartets; TASQs) that have been previously shown to interact with G4 structures in cells according to a biomimetic, like-likes-like approach (that is, the spontaneous association of two G-quartets, one from the native G4 and one from the synthetic TASQ, just like two magnets that attract each other). Here, the authors increased the synthesis yield, reduced the complexity of the chemical reaction required to generate their TASQs and improved compound interactions with G4 structures in cells. A major change the authors made to the chemistry of these compounds was to alter the linker regions between chemical groups within the compounds. They swapped amide links, which provide more rigidity within a molecule, for alkyl links, which increased the flexibility of their compounds. 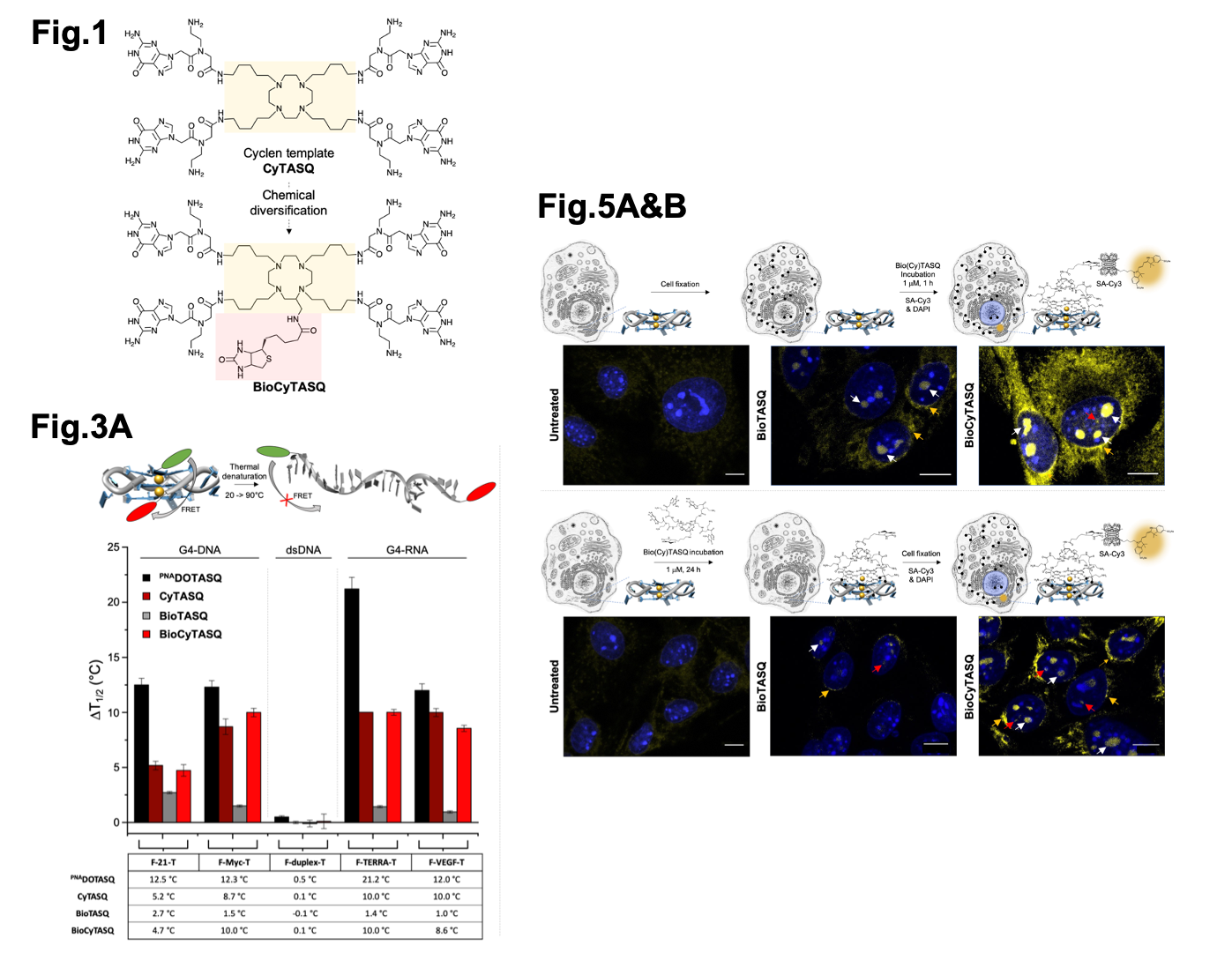 Selected figures from Sperti et al. Fig1 shows the chemical structures of CyTASQ and BioCyTASQ. Fig. 3A shows a schematic of the FRET-melt assay and the corresponding results. Fig 5A & B show the sub-cellular localisation of the TASQ ligands in post-fixed labelled (top) and live cells. Figures modified from Sperti et al. under a CC-BY-NC 4.0 International license.

To test if CyTASQ and BioCyTASQ interact with DNA/RNA G4 structures, the authors used a Fluorescence Resonance Energy Transfer (FRET)-melting assay (6). FRET-melting is a technique used to examine the physical distance between two fluorescent labels located at both extremities of a G4-forming DNA/RNA sequence. If they are in close proximity, one (the donor) donates energy to the other (the acceptor) resulting in a quenched fluorescence of the donor. If they are far (e.g. upon loss-of-structure DNA melting), this reaction doesn’t happen and the fluorescence of the donor is retained. Here, the authors used doubly labelled synthetic G4s and melted the structures to ask at which temperature half of the signal is restored (which allows for the quantification of the stability of the G4 structures via mid-transition temperatures, T1/2 (in °C)). Then, similar experiments were performed in the presence of their compounds to ask if their compounds influence DNA/RNA structure stability (quantified by a difference of T1/2 values, reported as DT1/2). Overall, their new compounds (CyTASQ and BioCyTASQ) didn’t stabilise the DNA/RNA structures as well as the original compound (PNADOTASQ), likely due to the swapping of the linker regions, but that the biotinylated BioCyTASQ interacted better with G4s when compared to the original BioTASQ (with the amide links) meaning the flexibility in the compound improved its affinity and selectivity for DNA/RNA structures. This was of utmost importance as these biotinylated TASQs were intended to be used as molecular baits to isolate G4s by affinity precipitation (see below).

Of course, in light of their biomimetic nature, the interaction of these compounds was specific to G4 structures.

Next, the authors tested the ability of these biotinylated compounds to isolate synthetic G4 DNA/RNA structures (labelled with Fluorescein amidite; FAM) from solution using streptavidin-coated magnetic beads to selectively isolate BioCyTASQ and anything bound to this compound (7). They demonstrate that BioCyTASQ can selectively capture and pull down these synthetic G4 structures (they see increased FAM signal) more efficiently than BioTASQ. These in vitro experiments are important validation steps as biotinylated TASQs are key molecular tools for the G4RP-seq protocol, in which they are used as baits to capture transiently folded RNA G4s in vivo (G4RP: G4-RNA-specific precipitation) prior to their identification by sequencing. The G4RP-seq method thus provides unbiased evidence of the existence of RNA G4s in the transcriptome of functional human cells; the design and synthesis of ever more efficient molecular baits is a key step towards a better understanding of the complex biology of G4s.

Another interesting point described here was the versatility of biotinylated G4-ligands. BioCyTASQ was also used to detect G4 structures in human cells by optical imaging. To this end, the authors localise BioCyTASQ after incubation in either live cells or “dead” cells following formaldehyde fixation, by labelling with a fluorescent streptavidin, specifically streptavidin conjugated to Cy3. This protocol, usually referred to as pre-targeted imaging, is applied here to the visualization of G4s in human cells. They saw BioCyTASQ localised in both live and fixed cells diffusely throughout the cytoplasm and at perinucleolar/nucleolus/nuclear regions, where G4s are known to accumulate. This protocol is interesting as it provides an alternative to classical G4 labelling strategies based on G4 molecular probes (8; with potential specificity issues) and the more elegant in situ click imaging (a two-step protocol that circumvents these specificity issues; 9,10).

I really enjoyed reading this preprint paper. Despite G4 structures being described in the 1980’s, only recently have we begun to understand their wide roles in eukaryotic cellular regulation. However, we still have much to learn. A current challenge is the selective capture and stabilisation of G4 structures for further study in eukaryotic organisms. In this paper, the authors have used previous data to improve already available compounds generating new compounds suitable for studying and isolating G4 structures selectively in human cells. I really hope to see their use across a range of different organisms in the quest to understand G4 biology.

A1: Replacing amide by alkyl linkers was primarily done to simplify the chemical access to biotinylated TASQs, to make their synthesis shorter, more efficient and reliable. But you’re right, the equilibrium between two effects is indeed rather subtle here. The rigid amide linkers are engaged in an intramolecular interaction with the biotin appendage, which negatively impacts the performances of BioTASQ (diverting the biotin from its engagement with streptavidins), but also somehow pre-organises the four guanine arms to make the intramolecular G-quartet more stable, and thus, the G4-interaction better. Replacing amide by alkyl linkers thus alleviates this internal poisoning but also results in a less pre-organized synthetic G-quartet. In fine, we found that the benefit justifies the costs as BioCyTASQ has better in vitro properties (apparent affinity, capture ability) than BioTASQ.

A2: The in situ click imaging developed and applied to G4s by Raphael Rodriguez and colleagues was a breakthrough as it allowed for targeting G4s in cells with a highly specific G4 ligand (pyridostatin, or PDS) with a minimal chemical modification (the introduction of an alkynyl appendage) which marginally modifies its pharmalogical profile and targets engagement. The G4 ligand is then localised in cells thanks to its bioorthogonal reaction with an azido-fluorophore by click chemistry. We followed the same way here with a biotin appendage, which is admittedly less elegant than an alkynyl appendage as biotin is bigger than an alkyne and can create H-bonds with cellular components. However, our goal was to use a single molecular tool to isolate (G4RP protocol) and visualize G4s (pre-targeted G4 imaging), and pull-down protocols such as G4RP are most commonly carried out with biotin-labelled probes. Both approaches are therefore complementary.

A3: TASQs are generally not toxic in both non-cancerous and cancerous cell lines (with IC50 values >100 mM under conventional antiproliferative assays). This is another difference with pyridostatin (PDS, see above) as PDS is widely used as a G4-targeting therapeutic agent while TASQs are solely molecular tools usable to interrogate G4 biology in cells. Our aim is not to develop therapeutic agents as we believe that G4 are far too complex cellular effectors to be considered to be valuable and specific anticancer targets, but this is my opinion only and this view is not widely accepted. We are currently investigating the possible roles of G4s in central nervous system cells and our first results indeed show that caution must be exercised when using G4s as therapeutic targets (11). But more experiments must be performed, more results must be collected before final conclusions could be drawn.