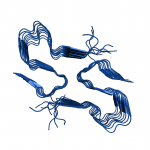 Neurodegenerative diseases, such as Alzheimer’s disease, are characterized by protein aggregation in the brain. In Alzheimer’s disease, the protein amyloid-β (Aβ) clumps together into fibrils and forms amyloid plaques outside the cells. Recent research with brain samples of diseased patients has demonstrated that variants of amyloid fibrils exist, even when formed by the same protein [1]. Structural variants of Aβ fibrils are suspected to affect aggregate toxicity and disease progression [1]. In 2010, a modifier of the aggregation process (MOAG-4) was discovered in C. elegans, which has SERF1a and SERF2 as its human orthologs [2]. While their function remains largely unknown, MOAG-4 and SERF were able to stimulate aggregation and enhance toxicity in C. elegans and human cell lines, respectively [2]. A structural study has revealed that the binding of SERF1a causes a conformational change in an aggregation-prone protein, increasing its aggregation tendency [3]. These results led to the hypothesis that MOAG-4/SERF affects the aggregation process. The same authors who discovered MOAG-4/SERF now explore the effects of a Serf2 knock-out (KO) on the aggregation process of Aβ in a more complex mammalian system, the mouse.

The authors first set out to generate a mouse model to study the effects of SERF2. Full-body Serf2 KO mice are however not viable due to severe developmental issues, suggesting a role for SERF2 in early development. Instead, the authors develop brain-specific Serf2 KO (Serf2br-/-) mice which are viable, and cross these with amyloid model (AM) mice. In this AM model the Alzheimer amyloid precursor protein (APP) with disease mutations is overexpressed. The authors use the resulting AM and AM;Serf2br-/- (here referred to as AM and Serf2 KO, respectively) for further experiments. They confirm that the levels of the APP cleavage products, Aβ40 and Aβ42, in these mice are unaffected by the brain-specific knock-out of Serf2.

The authors then investigate the effects of SERF2 elimination on the aggregation process by staining the Aβ aggregates in brain samples from Serf2 KO mice and AM mice with antibodies. They do not identify distinct differences in plaque morphology between the Serf2 KO mice and the AM mice. Quantification of the stained plaques shows a correlation between Aβ levels and the number of plaques. Surprisingly, the authors observe a slight increase in plaque load for the Serf2 KO mice compared to the AM mice with similar Aβ levels. They also detect a higher amount of intracellular staining in the Serf2 KO mice relative to the AM mice, suggesting that the absence of SERF2 influences Aβ aggregation already inside the cell before formation of extracellular plaques.

Next, the authors stain the brain samples with Thioflavin-S (ThS), a compound that binds amyloid fibrils. Although they do not observe a difference in ThS plaque load between the Serf2 KO and the AM groups, a distinction between the groups is noticeable when they compare the number of ThS plaques with the Aβ levels in individual animals. The authors find a positive correlation between the Aβ levels and the number of ThS-positive plaques in the AM mice, while this correlation is negative for the Serf2 KO mice, indicating that a loss of SERF2 induces a change in aggregation behaviour.

The authors follow up on this result using two luminescent amyloid binding dyes. The first dye, qFTAA, only binds to mature amyloids, just like ThS. The other dye, hFTAA, binds to mature amyloids as well as to the less densely packed immature ones. With spectroscopy they measure the ratio between the two dyes in individual plaques. They discover that the plaques in the Serf2 KO have on average a higher qFTAA:hFTAA ratio compared to the plaques in the AM mice. Light microscopy shows that qFTAA binds the plaques of both groups in the same manner. However, the plaques of the AM mice contain hFTAA in the core and the border, while hFTAA staining is hardly present in the plaques of the knockout mice (Figure 4E). This indicates that the plaques of Serf2 KO mice contain fewer immature amyloids and are generally more compact.

With scanning transmission electron microscopy (STEM) the authors visualize the global fibril morphology in greater detail. The images reveal that the Serf2 KO plaques are indeed more condensed compared to those of the AM mice (Figure 4F). With this, the authors conclude that Serf2 KO causes a denser plaque morphology in mice, indicating a conformational shift by SERF2 in the Aβ aggregation process.

As life sciences bachelor students, we have been educated on the topics of protein folding, aggregation and neurodegenerative diseases. We are fascinated by the intricacy of the aggregation process and how modern science tries to understand and cure diseases such as Alzheimer’s disease. We are excited about this preprint because it provides a new perspective in the aggregation process of specifically Aβ, but likely also other aggregation-prone proteins. By confirming the ability of the endogenous factor SERF2 to alter the aggregation process in their mouse model, the authors are the first to describe the action of an aggregation modifier in a more complex organism. These results might provide the basis for the identification of other endogenous factors that influence aggregation and might explain why there are structural variants of Aβ plaques in Alzheimer patients. We are curious to see what these results will mean for future therapeutic strategies.

In your studies, you explore the effects of MOAG-4/SERF in both C. elegans and mouse models. In C. elegans you describe a decrease in aggregation upon deletion of moag-4, while you do not observe this decrease in the mouse models. How would you interpret these results?

For this study you have put a lot of effort into creating a brain-specific KO mouse model. How can your model contribute more to future studies in the field?

Do you the think the differences you found between the amyloid plaques could affect the disease progression of Alzheimer in the mice? Do you have ideas how to further investigate this?

How would you imagine your results to contribute to finding a treatment for neurodegenerative diseases?

1) In your studies, you explore the effects of MOAG-4/SERF in both C. elegans and mouse models. In C. elegans you describe a decrease in aggregation upon deletion of moag-4, while you do not observe this decrease in the mouse models. How would you interpret these results?

In line with published in vitro data that show that aggregation is accelerated by MOAG-4 or SERF1-3, deletion of MOAG-4 in worm seems to delay protein aggregation, without affecting the concentration of aggregation-prone proteins4. For Aβ and polyQ we demonstrated a shift in the size distribution of aggregation intermediates in worm extracts4. The structural shift we observe in mice seems to be in line with these findings in worms. While we can conclude that depletion of SERF results in a structural change of aggregates without affecting amyloid beta concentration, we cannot conclude whether this is accompanied by a delay or an acceleration of aggregation based on our current data. In order to do so, more time points should be analyzed that are intermediate to the time-points we selected for our study.

2) For this study you have put a lot of effort into creating a brain-specific KO mouse model. How can your model contribute more to future studies in the field?

The role of SERF2 is still unknown, but the SERF2 knockout mice have demonstrated its function in development. Our model can therefore be used to further investigate the  biological function of SERF2. Moreover, thanks to its selective inducibility by the CRE-lox system, it can also be used for knock out SERF2 after development. This might allow for a clear separation of its developmental effects from its effect on protein aggregation later in life.

3) Do you the think the differences you found between the amyloid plaques could affect the disease progression of Alzheimer in the mice? Do you have ideas how to further investigate this?

Based on our findings in the worm and what is known in recent literature about the relationship between aggregate structure and disease severity, it does seem plausible that the structural differences we observe could result in a change in disease progression as well.

We have considered a few ways in which this can be further investigated. One way would be behavioral and cognitive testing. Another possibility might be looking for change in a more physiological readout of memory, such as electrophysiological measurements  of LTP. Finally, one could monitor molecular changes related to Alzheimer’s disease and how they are altered by SERF2 KO. Each of these techniques would provide information on a different level, but comes with its own difficulties and challenges.

4) How would you imagine your results to contribute to finding a treatment for neurodegenerative diseases?

Our results can contribute in two ways. On the one hand, our investigation into SERF and how it effects protein aggregation may provide new insights into the endogenous factors that contribute to protein toxicity and disease progression in neurodegenerative diseases. On the other hand, most research into treatments has focused on either reducing production or increasing degradation. Interventions targeting the direction of the aggregation process could provide an interesting complementary approach, either by targeting SERF directly or by developing compounds using a similar mechanism. For this reason, our lab has also recently deposited a paper on BioRxiv exploring the molecular interaction mechanism in closer detail 5.