The answer to a buzzing question: Why are some people more attractive to mosquitoes than others?

Mosquito bites are not only unpleasant, but can pose severe health risks from viral infections including Zika or dengue fever. It is well known that some humans are more often the target of these insects than others (1). But what distinguishes these “mosquito magnets” from less preferred persons? To date, it is assumed that the differences are caused by variation in individual skin odors produced by humans, which are often linked to their unique skin microbiota (2). Interestingly, besides a heritable component, individuals can also become more attractive, for example following malaria parasite infection or beer consumption (3, 4). However, the specific chemical mechanism contributing to “mosquito attractiveness” is not known yet.

In their study, De Obaldia and colleagues clear up the myth of “sweet blood” by determining the differences in skin odor components between highly and weakly attractive humans. Furthermore, they shed light on the mosquitoes’ sensory pathways involved in the attraction to preferred individuals.

Initially, De Obaldia et al., compared the “attractiveness” of different individuals to female Aedes aegypti mosquitoes. They assessed mosquito preferences between the forearm skin odor collected on nylon sleeves of eight human probands using an adapted two-choice olfactometer (Fig. 1). By applying an attraction score system, they ranked the subjects from most to least attractive, with the most attractive subject being 100 times more attractive than the least attractive subjects. Of note, these preferences were stable over several months indicating that differences in skin odor remain consistent for long time periods. 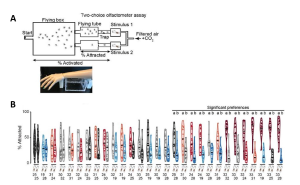 In the following, differences in the chemical composition of the skin odor between highly and weakly attractive individuals were assessed by gas chromatography/quadrupole time of flight-mass spectrometry (GC/QTOF-MS). This analysis revealed that highly attractive individuals produce increased levels of carboxylic acids. This class of organic acids typically contains a carboxyl group (C(=O)OH) attached to an R-group and includes among others fatty acids, amino acids and keto acids.

Mosquitoes detect olfactory cues with the help of odorant (ORs) and ionotropic receptors (IRs), which are both odor-gated ion channels. While ORs are mainly involved in sensing esters, alcohols and ketones, IRs bind carboxylic acids and amines (5). Mosquitoes lacking the OR co-receptor Orco were impaired in their ability to detect specific odors, but could still distinguished highly and weakly attractive individuals. Strikingly, mutating either of the IR co-receptors Ir8a, Ir25a, and Ir76b strongly affected the mosquitoes’ overall attraction to human scent but also maintained the ability to differentiate highly and weakly attractive people. This suggests the evolution of highly redundant sensory pathways which allow mosquitoes to detect attractive individuals even in the presence of severe genetic disruption of the olfactory system.

All of us might already have asked ourselves the question why some people are more attractive to mosquitoes than others. Although olfactory cues in human skin odor seem to play a major role, not much is known about the specific chemical mechanism. In their study De Obaldia et al. identify carboxylic acids as a class of compounds that are very likely to contribute to the “attractiveness” of an individual. Furthermore, their investigation of the sensory pathways involved allows us to perceive the redundancy and high effectivity of the mosquitoes’ olfactory system, which have evolved in a fascinating evolutionary process. Ultimately, this knowledge can help to develop more effective strategies to protect “mosquito magnets” from mosquito bites and prevent the spread of diseases caused by these insects.

The published version of the article did not undergo any substantial changes compared to the preprint posted on bioRxiv in January 2022. One obvious change is that the paragraphs and the associated figures (Figures 2 and 3 in the preprint) about the effect of Onco and Ir8a receptor mutations – both do not impair the ability of mosquitoes to differentiate individual humans – were summed up to make the results more concise. Furthermore, a section dealing with the “Limitations of the study” was added to the discussion. Here, the authors first point out that their findings do not demonstrate a direct causality between skin carboxylic acids and the attractiveness of individuals to mosquitoes. This would require evidence for necessity and sufficiency of these compounds which, at the moment, is extremely difficult to prove. Then, they emphasize that this study only focuses on compounds containing carboxylic acid groups; therefore, other chemical substances in human skin odor might play a role as well. Lastly, they mention that it remains unclear whether carboxylic acids or more volatile derivatives thereof are also involved in differential mosquito attraction to humans across long distances. The open questions raised in this preLight were not mentioned in this paragraph.

Overall, the implemented changes make the article even more concise, and I am excited to see how this work will contribute to the identification of mosquito magnets and the development of new intervention strategies to prevent the spread of pathogens caused by mosquitoes in the future.