As DNA bases form hydrogen bonds between their complementary Watson-Crick base pairs (e.g A-T), a partially open DNA duplex can be targeted by a third ‘invasive’ DNA strand with a complementary sequence to one of the original duplex strands. When this ‘invader’ pairs with one of the original strands, the bases on the other strand are replaced, base by base, with those from the ‘invader’ strand (this is known as strand displacement). The strand movement during this process is known as branch migration. Strand displacement and branch migration occur during homologous recombination to exchange information between homologous sister chromatids (1). To experimentally study these movements, researchers use synthetic DNA duplex structures made of one strand with an overhanging region (called a ‘toehold’) bonded to a complementary strand which will be ‘displaced’ when the toehold strand is offered a third strand which can trigger strand displacement and branch migration resulting in the ‘invading’ strand dislodging the other complementary strand once the bases have been exchanged (2). Much work has focused on measuring the dynamics of the immediate interaction between the original strand and the ‘invading’ strand, with little known about the dynamics of branch migration. Here, the authors use these synthetic DNA duplex structures to develop a microscopy-based assay (DNA “fission”) to study, base by base, the dynamics of branch migration. 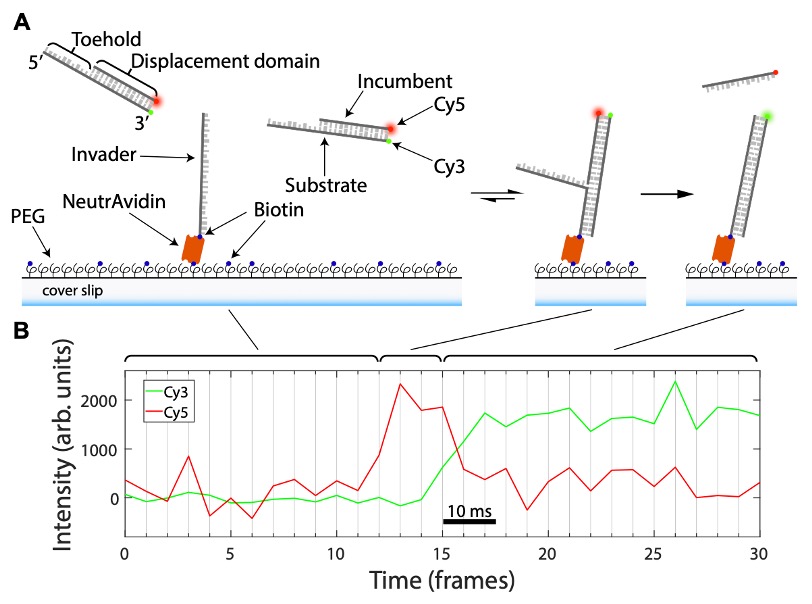 Figure 2 describes how the data is acquired in this study to show strand displacement. (A) Outline of how DNA “fission” assays are performed. (B) Example of the FRET signal dynamics obtained during a DNA “fission” assay. Adapted from Figure 2 produced under a CC-BY-NC-ND 4.0 International license.

smFRET (single-molecule Forster Resonance Energy Transfer) is a microscopy-based method exploiting the ability of fluorophores to transfer energy from one (a donor) to another (acceptor) when in close proximity (up to 10 nm away; 3). So, when a donor is close to an acceptor, the acceptor accepts energy and fluoresces. The authors modify a synthetic partial DNA duplex, made of a strand with an overhang region (‘toehold’) and a bonded complementary strand by fusing fluorophores to the ends of these strands (furthest from the toehold site); Cy3 on the ‘toehold’ strand and Cy5 on the other complementary strand. In this configuration, the Cy3 and Cy5 fluorophores are close, meaning only the Cy5 signal (shown as red) is generated. When this synthetic partial duplex is exposed to an ‘invader’ strand, which the authors immobilised on a glass coverslip, the ‘toehold’ strand of the synthetic duplex will interact with this ‘invader’. The ‘invader’ will replace (‘displace’) base-by-base the Cy5-linked strand and the fluorescent signal will go from Cy5 (red) to Cy3 (green). This change in signal can be monitored over time can be used to monitor from the first base ‘displacement’ to the last because of the stepwise separation of the Cy5 and the Cy3 marked strands. As the Cy5 and Cy3 signals are ‘split’ apart they liken their approach to a fission reaction, hence DNA ‘fission’.

2) smFRET can measure the time of DNA strand displacement

Using smFRET, the authors measure strand displacement timing (i.e when the loss of red signal and gain of green signal occurs) across several different synthetic DNA duplexes. Eight different versions were constructed by altering the sequence of the strand to be ‘displaced’ (which has the Cy5 fluorophore on it). They report an average of 35 ms to displace the Cy5 strand with the bases being exchanged on average every 300 µs (depending upon the base). Their data supports a situation where the strands are displaced asymmetrically (the authors call this an ‘asymmetric random walking’ model), where the steps within this process are affected by 1) how this first base is displaced, 2) the base pairs and their neighbouring base pairs, and 3) the lengths of the competing single-stranded overhangs.

Even using RNA and DNA with the exact same sequences as ‘invader’ strands (expect the substitution of T’s to U’s in RNA), RNA ‘displaced’ the Cy5 strand faster than DNA when the RNA template was ordered from 5’ to 3’ but slower than DNA when in the RNA template was in the 3’ to 5’ orientation. The authors suggest these differences could be due to the type of DNA helix formed when the samples re-wind, the sequence composition and how DNA and RNA bases are stacked within a helix.

4) Salt does not affect strand displacement in this assay

The buffers used during the experiments to study strand displacement contain salt which is important for aiding base pairs to open and close (i.e break and re-form the W-C hydrogen bond pairing). As salt (here, NaCl) can interact with the DNA (via the phosphates in the backbone), it is possible salt may affect the performance of the assay and alter its dynamics; however, the authors show this is not the case under their experimental conditions where salt concentration has little effect on ‘strand displacement’ times. They suggest this could be due to the higher demand for salt ions to close DNA bases together combined with the weaker demand for salt ions to open (‘break’) the DNA bases during branch migration. These effects could balance each other out.

I like this preprint because it took two seemingly unrelated but well-used approaches (the synthetic partial DNA duplex systems and FRET) then combined them to produce a different assay addressing a current knowledge deficit with multiple applications for future study of branch migration processes.

Toehold formation (or DNA zipping) is at least 1000-fold faster than branch migration, and therefore, it will not be easy to cover these widely separated timescales in one experimental setup.

Although not included in this study, we did test the effect of Mg2+. Similar to Na+, it had little effect on the strand displacement kinetics.

Yes. Due to the small dataset in this study, our results were unable to adequately resolve the rate of guanine base displacement. Ideally, we’d like to incorporate the effect of the neighbouring nucleotides into the sequence dependence model, as well as the influence of overhangs, based on a much larger dataset.