How do TADs matter in gene expression and disease? Despang et al. shed light on the (un)importance of TADs and CTCF

The 3D genome is organised into megabase-sized topologically-associated domains (TADs), which are regions of DNA that interact with each other more frequently than with regions outside the TAD. The boundaries of TADs appear to be enriched for CTCF binding sites and CTCF binding, and CTCF has been shown to be crucial for maintaining proper TAD structure. There is some correlation of gene expression within TADs, whereas the boundaries appear to insulate interactions across TADs. Thus, it is thought that TADs regulate gene expression by bringing cis-regulatory sequences and promoters together while precluding inappropriate interactions with other TADs. Indeed, the disruption of TAD boundaries or reorganisation of TADs by structural variation have been found to alter gene expression, resulting in various diseases including cancer. In contrast, experiments that disrupt TAD structure genome-wide (by depleting CTCF) have very little effect on gene expression. It is therefore unclear what the role of TADs are in regulating gene expression both in normal development and disease. In this preprint, the authors set out to directly test the role of CTCF and TADs in gene regulation in vivo in mice at one particular locus.

The authors focused on a locus comprising of two adjacent TADs, one containing the Kcnj2 gene and the other containing the Sox9 gene (Fig 1). In mice, both genes have distinct expression patterns, suggesting that they are regulated by distinct regulatory elements within their TAD. This is supported by the fact that reporter genes integrated into each TAD recapitulate the expression pattern of the respective genes. 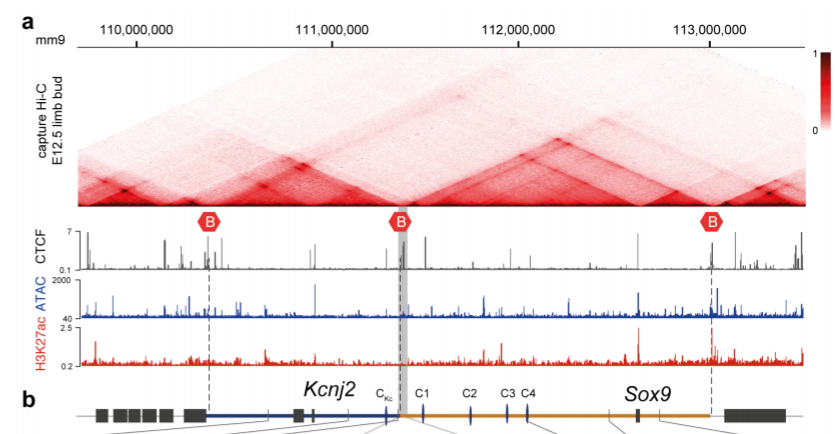 The TAD boundary contains a cluster of CTCF binding sites, with four additional CTCF binding sites in the Sox9 TAD and one in the Kcnj2 TAD. To test the role of CTCF at this locus, the authors generated various alleles with CTCF sites at the TAD boundary deleted (ΔBor), with ΔBor plus one, two or all four of the CTCF binding sites in the Sox9 TAD deleted (ΔBorC1, ΔBorC1-2 or ΔBorC1-4 respectively), or with all CTCF sites deleted (ΔCTCF). They then performed capture Hi-C on the locus, which allows for the detection of long-range interactions of targeted genomic regions. The ΔBor allele alone leaves the TAD structure largely intact. However, sequential deletion of the additional CTCF sites gradually leads to more fusion between the two TADs, with ΔBorC1-4 and ΔCTCF causing almost complete fusion of the TADs. Thus, the TAD boundary does not appear to be necessary to maintaining TAD structure, instead, the CTCF-mediated substructure within the TADs holds it together.

Despite the dramatic changes to TAD structure, there was very little change in expression. Sox9 expression reduced only marginally in the ΔCTCF mutant, while Kcnj2 expression increased approximately 2-fold in all mutant alleles. Intriguingly, all animals were viable with no detectable phenotypic abnormalities. This suggests that while the TAD organisation provides some level of robustness, gene expression is largely unaffected by even large changes in TAD structure.

Because large structural variants have been previously found to disrupt gene expression and cause disease, the authors then set out to test the effects of large structural variants on the locus by generating several alleles with combinations of inversions and deletions of the TAD boundary. In general, the inversions themselves do not appear to affect TAD structure. However, the repositioning of the TAD boundary has a large effect. The boundary appears to act as an insulator no matter where it is positioned, preventing communication between sequences on either side of it. Furthermore, when the TADs fuse, Kcnj2 appears to gain more contacts in the Sox9 domain, while Sox9 displays a reduction in contacts.

Gene expression also appears to be more drastically altered when the boundary is moved. Moving the boundary closer to the Sox9 gene or removing it altogether decreases Sox9 and increases Kcnj2 expression, consistent with the changes in TAD boundary. Animals in which the boundary is moved also display various phenotypic abnormalities. Taken together, these results show that large structural variants, especially those involving a TAD boundary, can have large impacts on gene expression and phenotype.

Most evidence supporting the idea that TADs regulate gene expression is based on correlation and has not been directly tested. It is currently difficult (or impossible) to predict what happens when a CTCF site or boundary is removed or added in the genome. Thus, I really like the fact that this preprint directly addresses this question even though it is only at one locus. Furthermore, the authors went beyond gene expression and looked at how it might impact phenotypes, which really made their findings more meaningful. I am also intrigued by the idea that TADs and enhancer-promoter interactions appear to be independent mechanisms of gene regulation, in contrast to the more common model of TADs enabling/ensuring the right enhancer-promoter interactions. While TADs are neither necessary nor sufficient for normal enhancer-promoter interactions, its boundaries can insulate such interactions, suggesting that insulation takes precedence over normal interactions. I think this means that understanding the interplay between cis-regulatory sequences (enhancers, promoters, insulators) should help us understand gene regulation much better.

Since the boundary appears to be so important in maintaining gene expression, I am really interested to know what transcription factor binding sites the boundary contains, besides CTCF. The CTCF sites alone within the boundary do not appear to be responsible for its insulating function, so what else could it be? This is particularly interesting because CTCF has been shown to be important for enhancer-blocking on a plasmid. Perhaps CTCF is acting in concert with a different factor in the genome for its insulating properties. It would also be interesting to see what the effect of deleting only the CTCF sites within the Sox9 regulatory domain is, since they seem to be more important in the maintenance of the TAD structure.