Horizontal gene transfer is a dominant mode of genome evolution in bacteria, but examples of cross-kingdom transfer of genes from bacteria into animals are rare. Previous work identified a family of anti-bacterial effectors likely transferred from bacteria to a common ancestor of ticks and mites hundreds of millions of years ago [Chou and Daugherty et al, 2014]. The adaptation of bacterial Type 6 secretion amidase effectors (TAEs) into domesticated amidase effectors (DAEs) suggested they may serve a beneficial effect in the new host organism. The tick Dae2 maintains anti-microbial activity, but its role in tick fitness remained unclear. In this preprint, Hayes and Radkov et al illuminate in more detail the biochemical activity of Dae2, and identify a role for its activity during tick bloodfeeding.

The authors found that Dae2 was upregulated during bloodfeeding and injected into the host in the tick saliva. This suggested it could target commensal skin microbes in the host, which might represent novel pathogens that could infect the tick during feeding. Blocking Dae2 with gene silencing or pre-bite passive immunization of the mouse host increased the colonization of Staphylococcus species in the ticks, as well as decreased the feeding efficiency of the tick. Additional experiments suggested that increased Staphylococcus colonization of ticks was pathogenic, leading to tick death when Dae2 activity was blocked. This activity is summarized in Figure 1, below. 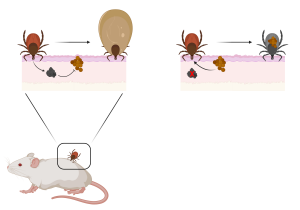 During tick bloodfeeding, the Dae2 protein is injected into the host where it can target and kill host commensal skin microbes, such as Staphylococcus species. This enables robust feeding by the tick. In the absence of Dae2 activity (right), host commensal species can colonize the tick gut and decrease tick feeding and fitness. Figure prepared with Biorender.

This study offers a compelling case study explaining a rare example of bacteria-animal horizontal gene transfer. The clear fitness benefit identified of Dae2 in ticks shows how acquisition of bacterial genes could be selected for over long evolutionary time and the potential of bacterial genes to expand the immune capabilities of animal hosts. Additionally, this study identifies a new biological pressure at the host-vector-microbe interface, where host commensals may act as vector pathogens – analogous to how vectors may harbor numerous host pathogens. Overall, this study expands both our understanding of how horizontal gene transfer may be used during animal evolution, as well as opens a new avenue to studying host-vector biology and the complex role of host microbes in shaping this interaction.