Updated prelight post about the bacterial communities of sea dwellers - little skates. Now with the response from authors Katelyn Mika and Alexander Okamoto! 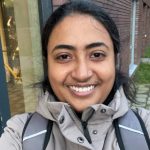 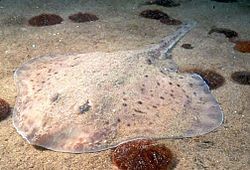 Elasmobranchs (which include sharks, rays and skates) are groups of fishes that have cartilaginous bones. These organisms have 5-7 pairs of external gill clefts and their skin is made up of placoid scales or dermal denticles. Some of them reproduce by laying eggs (oviparous reproduction) while others give birth to their young ones (viviparous mode).

Some of the key research areas related to these organisms revolve around studying their diversity, their families, ecology and their conservation status. Another key factor is understanding the microbial community dynamics and transmission patterns in these organisms. A handful of studies have profiled the microbes from guts or skins in a few species such as sharks, skates or ray fishes. In addition, a few studies in elasmobranchs have also reported about both environmental (i.e. horizontal) as well as vertical (i.e. parental) transmission. However, these studies have focussed on adults, leaving a lot to explore by investigating the microbiomes in these organisms during their early developmental stages such as juveniles.

In this study, the researchers profiled the bacterial communities of the egg-laying little skates, which are found in the North Atlantic Oceans. They have attempted to trace the transmission pattern of the bacterial members by sampling their diversity at six time-points during their development.   In the egg, embryonic development occurs in 33 stages and lasts 6-12 months depending on environmental conditions. When embryonic development is still in progress, at some point the egg capsule partially opens, allowing contact with the surrounding sea water. Researchers used the 16S rRNA gene sequencing method to look into the bacterial communities of the skate Leocoraja erinacea. For bacterial community profiling, they sampled external and internal gills, embryonic skin as well as adult skin.

Key points in this paper

This in turn puts forth few other questions:

Which factor is essentially driving the transmission? – would the feeding substrates and any other bottom dwellers closely associated with the skates might be some important sources to look at?

What factors are potentially causing the inter-individual variability and sharing of the limited number of microbes among the individual skates?

Is there any other additional/alternative methods to study the microbial transmissions in such marine organisms?

Thanks for the great writeup and thoughtful questions! We’ve put some of our thoughts on each below.

Which factor is essentially driving the transmission? – would the feeding substrates and any other bottom dwellers closely associated with the skates might be some important sources to look at?

In the paper we show that the microbiome of an individual skate is derived both from its mother and the environment. As you read, maternal contributions pass through the egg capsule, but we don’t yet know whether or not this is an active or passive process. As far as environment sources, your guesses are great places to start! Diet almost certainly plays a role, as well as possible seasonal fluctuations in the microbes common in the water column and on the ocean floor. Investigation of other bottom-dwelling marine organisms from the North Atlantic will help us differentiate microbes uniquely enriched in the little skate compared to other species.

What factors are potentially causing the inter-individual variability and sharing of the limited number of microbes among the individual skates?

We expect some level of inter-individual variability given genetic variation among individuals. Additionally, the unique life trajectories of individuals will also lead to differences in microbial acquisition, as is true in humans as well. Our experimental design did not associate egg capsules with the mother, so a future study that tracks microbiome transmission from a female skate to her offspring would offer more precise insights into the fidelity of intergenerational microbial transmission.

Is there any other additional/alternative methods to study the microbial transmissions in such marine organisms?

A major first step will be reproducing these results in other species with alternate life history strategies, such as a shark which gives live birth. Future studies could also focus on other components of the microbiome, such as Archaea and viruses. Other approaches, such as raising skate embryos in sterile seawater or using a fluorescently labeled microbe would allow for more direct identification of where the microbes are coming from.