The bitter taste of tau: how microglia “eating” neurons with tau aggregates may contribute to disease pathology and spreading in tauopathies

Aggregation of the protein tau is observed in several human neurodegenerative diseases including Alzheimer’s disease, frontotemporal dementia (FTD) and Pick’s disease. These tauopathies are characterized by neuronal cell death associated with intracellular tau aggregates (1). The exact mechanism of cell death and spreading of tau in the central nervous system (CNS) remains unclear, but there is evidence that microglia, the resident immune cells in the brain, are involved (2).

Amongst others, activated microglia help to remove damaged or dying cells in the CNS by engulfing them in a process known as phagocytosis. This is triggered by the exposure of “eat-me” signals like phosphatidylserine (PtdSer) on the damaged cells (3). Previously, the Spillantini lab investigated phagocytosis in co-cultures of microglia with neurons isolated from P301S tau transgenic mice. Due to the expression of mutant tau protein, these mice develop neuronal tau aggregates starting at the age of 3 months (4). The respective study revealed that living neurons with tau inclusions exhibit abnormally high amounts of PtdSer marking them for phagocytosis by microglia (5). Using the same model, in this pre-print Brelstaff et al. analyzed microglia that phagocytosed tau-containing neurons in more detail.

First, microglial cells from C57BL/6 wildtype mice were cultured with neurons isolated from 5-month-old P301S tau transgenic mice (P301S neurons). After several days, a significant amount of tau was detected in the supernatant of these co-cultures. Blocking phagocytosis by masking PtdSer markedly reduced the loss of neurons and the presence of tau in the medium indicating that phagocytosing microglia were the source of tau. Remarkably, microglia continued to release tau when re-isolated from the neuronal co-cultures.

Then, they further characterized tau detected in co-culture medium. Similar to tau in P301S neurons, tau in the supernatant was present in the form of insoluble aggregates. Of note, the isolated species were also able to induce aggregation in a tau seeding assay.

To determine the phagocytic capacity of microglia after ingesting P301S neurons, microglia were re-isolated and cultured again in the presence of fresh P301S neurons. In this setting, no significant loss of tau aggregate-containing neurons was observed indicating a hypophagocytic phenotype which renders microglia unable to engulf other neurons with tau aggregates. Additionally, these microglia showed an increase in acidic β-galactosidase activity, a marker for cellular senescence.

Next, a proteome array was performed on co-culture medium to identify proteins associated with the observed alterations in microglia functionality. While microglial monocultures released proteins such as CCL2, CCL6 and VEGF, addition of LPS induced a more inflammatory phenotype including TNFα expression. In contrast, no pro-inflammatory cytokines were detected in the medium of untreated P301S neuron-microglia co-cultures. Instead, several senescence-associated factors were secreted with matrixmetalloprotease 3 (MMP3) being the topmost upregulated. Consequently, the authors analyzed MMP3 expression in mouse and human brain tissue associated with tauopathies. Its active form was not only found to be upregulated in aged P301S mice but also in the brain of patients with different neurodegenerative diseases such as FTD and Pick’s disease.

Several of the upregulated proteins are controlled by the NFκB pathway. To test whether this also applies to MMP3, microglia were pre-treated with an NFκB pathway inhibitor; this resulted in a reduction of MMP3 in the culture medium. Interestingly, inhibition of phagocytosis did not decrease MMP3 production indicating that PtdSer-signalling is not involved in MMP3 activation. 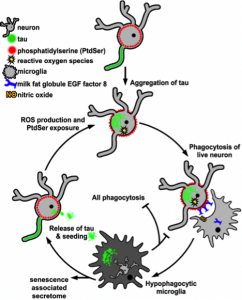 Figure 1. Potential role of microglia in a vicious cycle after phagocytosing neurons with tau aggregates.

There are several reasons why I highlighted this pre-print. First, in combination with previous findings, this study contributes to the understanding of cell death mechanisms and the spreading of tau aggregates in tauopathies. Moreover, it provides further evidence that preventing neurodegeneration and phagocytosis is a promising treatment strategy for tauopathies. Second, one of my research projects deals with phagocytosis of PtdSer-expressing living motor neurons in the context of amyotrophic lateral sclerosis, another neurodegenerative disease with characteristic protein aggregations. Thus, I am curious whether the reported results are also applicable to other tau-independent neurodegenerative disorders. Third, March 8th is celebrated as International Women’s Day. In most professions, including academia and science, women are still underrepresented at higher career stages. Early data suggest that the COVID-19 pandemic especially affected the work of female scientists and could widen the gender gap (6). Here, I like to emphasize that this study is led by Maria Gracia Spillantini, a renowned female neuroscience expert who is probably best known for identifying alpha-synuclein as disease-associated aggregation-prone protein in Parkinson’s disease. With her remarkable achievements and her extremely successful academic career, she is an encouraging role model inspiring many young scientists.