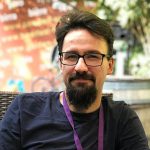 The long acquisition time required for localization microscopy to create an image leads to a number of complications such as drift. When drift occurs the sample’s apparent position on the camera sensor changes over time, leading to a “smearing” effect in the final image. Most solutions to this problem involve correcting the drift post-acquisition through cross-correlation or through tracking the drift with a stationary fiducial marker. This can lead to errors through imperfect correction and is also limited by the brightness of the fiducial. There is also the further potential loss of data if the sample drifts out of the cameras field of view.

The authors have developed a real-time drift correction system in hardware that dampens the effects of drift in the microscope over long acquisitions. This is accomplished through non-fluorescent polystyrene beads that are embedded in the sample and illuminated with an infrared LED. The beads produce diffraction rings that are imaged onto a separate CMOS camera and used to actively correct drift, holding the sample stationary. As the diffraction rings do not result from fluorescence but rather scattering, high illumination powers can be used to acquire large numbers of photons without risk of photobleaching, allowing localization with nanometer precision. Drift can also occur as a result of motions in the optical components between the sample and the camera. The authors solved this by introducing a white LED that is focused to a spot on the camera to monitor and correct for changes in the emission light path. Analysis of sample drift allows the authors to reduce the drift in x,y, and z over an acquisition from 45 nm to 0.27 nm, an approximately 20 times reduction.

The authors went on to demonstrate the utility of their system in several biological contexts, such as imaging single actin filaments in vivo with a precision ranging from 5-9 nm. Importantly this was achieved without averaging the positions of localizations that are assumed to be the same molecule, a process that is typically used to increase the accuracy in localization microscopy. The authors also used their feedback system to investigate the membrane distribution of two proteins in T-cells to show the phosphatase CD45 is excluded from the phosphorylated CD3ζ nanoclusters. This mechanism of correcting drift is going to be essential for obtaining accurate <10 nm distance measurements between objects.

Whilst methods for correcting data post-acquisition are available and commonly used in localization analysis, the results are not always satisfactory. The post-experiment nature also limits the ability to assess the quality of the data as it is collected at the microscope. The authors’ method here takes the adage “prevention is better than the cure” to heart, meaning that scientists no longer have to worry that data from samples they have spent large amounts of time producing are not corrupted by motions during the acquisition. Ultimately, I would like to see a mechanism such as this introduced into commercial microscopes as it would vastly increase the quality of collected data and improve the reliability of experiments.

1) One of the mechanisms for improving the drift correction was correcting the EMCCD camera although the details of this are not very well fleshed out. Can you elaborate more on what these corrections are and what purpose they are performing?

2) Further to this, CMOS cameras show more complicated noise statistics than EMCCD cameras. Have you tried applying gain and offset correction algorithms for correcting the sensor before fitting the diffraction rings?