Making a mountain out of a molehill: interdisciplinary study by Balassy, Lauzon and Hilbert shows how local perturbations become important globally. #actin #biophysics 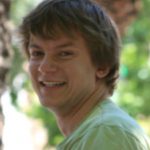 How local perturbations in a system spread and influence the system as a whole is an important question in biology. Examples include trigger waves in Xenopus eggs, signal conduction in neurons and, on a much smaller scale, interactions between actin filaments or microtubules. In these examples, local interactions result in a system-wide spreading of information or mechanical coupling.

In their preprint, Balassy et al. investigate the interplay between local perturbations and system size in a well-controlled 1D geometry in an actin sliding assay. Myosins in this assay are bound to the substrate, while the motion of different length actin filaments can be observed (panels A and B). Crucially, a filament’s sliding behavior depends on its length (which corresponds to system size in their modelling). Small filaments (< 0.3 um) exhibit no sliding, intermediate sizes (< 1 mu) show a stop-and-go pattern, while longer filaments slide continuously (panels C and D).

Balassy and colleagues explain this behavior within their framework for one-dimensional spreading of perturbations. Myosin arrest only becomes dominant when the arrest spreads to the length of the entire filament. This is only likely for small filaments and has less impact on intermediate and no impact on long filaments. Conversely, introducing long-term stable local arrest experimentally via filamin allows spreading of arrest to the entire filament. This impacts long filaments the most, due to the higher probability of filamin binding.

From this specific molecular picture the authors then generalize their actin-myosin theory to a more general spin chain model. The latter can in principal be mapped to many different processes, showing the generality of their findings.

Given the simplicity of the model it seems tempting to generalize at least the theory to 2D or 3D, which might introduce interesting phenomena based on a system’s geometry. For anyone in the field it is also worth looking into the specific advances of the model compared to previous attempts of modelling the same systems, however, these were too rich to cover in detail in this piece. Taken together, this is a great example of combining rigorous theory with a tractable experimental system, in order to generalize physical mechanisms.

The emphasis lies on 1D, if the expected behavior is different in 2D, how hard would it be to generalize the theory?

Depending on the typical or useful size of a given system, interactions might need to be tuned, is this seen in vivo?