Prying on the structure of Prions

Neurodegenerative diseases are highly debilitating conditions. Collectively, they cause a gradual degeneration of the central or peripheral nervous system, with symptoms ranging from memory loss, mood swings and behavioural changes to a loss of movement (depending upon the locations of the affected nerves; 1). What triggers neurodegeneration is still widely investigated however a group of such disorders (for example Creutzfeldt-Jakob Disease; CJD) have been linked to lethal prion pathogens. Prions are very unusual pathogens as, unlike viruses, bacteria and parasites, they do not contain DNA or RNA. Instead, prions are infectious, misfolded assemblies of a normal cellular prion protein (PrPC), with the resulting protein known as PrPSC. Prions can self-propagate, meaning PrP monomers assemble as fibrils, which can fragment then initiate the formation of other fibrils (2). They transmit in various ways, for example via blood transfusion and infected tissue/other fluids, consumption of infected tissues or from the environment from contaminated soil (3). The pathology of the infection arises when the prion form of the protein forms aggregated (often in fibrillar forms called amyloids) which accumulate and fatally damage tissue; a similar pathology can be observed in diseases such as Parkinson’s and Alzheimer’s disease (4). As development of a prion disease is centred on the way in which the PrPC folds in the host organism, understanding how prions fold and multiply is key to understanding disease formation, transmission and manifestation. Here, the authors perform Cryo-EM to produce the first high-resolution structure of an infectious mammalian prion. This prion strain (named 263K) was purified from the brains of terminally ill hamsters.

PrPC is a cell surface protein attached to the surface via a glycosylphosphatidylinositol (GPI) anchor. The N-terminal section is disordered and flexible whereas the C-terminal is made up of 3 alpha-helical domains, and a small beta-sheet. PrPC is both protease sensitive (i.e can be digested) and detergent soluble which is entirely contrary to the prion form (PrPSC) of the protein which is highly resistant to both. PrPSC assembles as beta-sheet rich fibres, that can appear like twisted ribbons or intertwined filaments. This arrangement is starkly different to the arrangement of the original non-prion form of the protein which is largely alpha helical with a very low beta-sheet content (5). In this study, the authors use cryogenic electron microscopy (Cryo-EM) to produce a structure of the prion form of the protein. Cryo-EM is a sophisticated, high resolution microscopy technique in which samples can be imaged in their native hydrated state. Samples are ‘flash frozen’ in a cryogenic (extremely low temperature) solution, for example, liquid ethane. This super rapid freezing means water molecules within the sample will be vitrified rather than crystallized, instead leaving a solid sample in its native hydrated state which can be imaged at high resolution on a transmission electron microscope (which uses a high-energy particle beam to capture the pattern of electron scatter generated when the beam passes through the sample; 6). 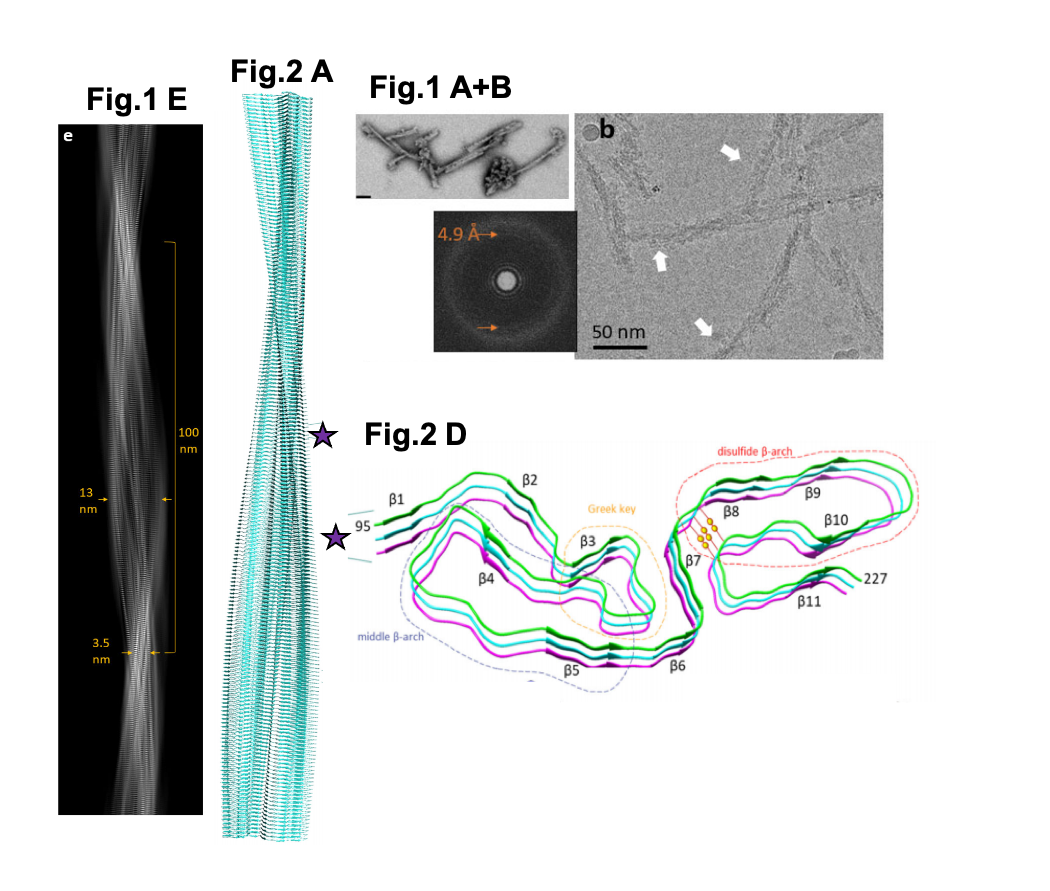 A selection of figures from Kraus et al. Fig. 1A. Negative stained TEM images of 263K prion fibrils (scale bar = 50 nm). Fig 1B. 2D cryo-EM images of 263K prion fibrils. Orange arrows = regular 4.9 Å spacing, white arrows = globules. Fig. 1E. A project of the fibril density map. Fig. 2A. An extended model of the fibril shown as a ribbon diagram. Fig. 2D. The stacking of beta-sheets within a region of the fibril. Different motifs are labelled and depicted by dashed lines. Yellow spheres = disulfide bond. Purple stars = position of the enlarged region on the fibril. Figures reproduced under a CC0 license.

To date, two major structural models have been proposed for infectious prion organisation, 1) arranged as a 4-rung beta solenoid like structure or 2) a Parallel in register intermolecular beta sheet (PIRIBS) where monomers are aligned and stacked.

I have always been fascinated by prion pathologies. It is interesting to think that misfolding of a protein can cause such devastating diseases. Given this, understanding what prions look like once they become pathogenic and how they become pathogenic by altering their shape is very important to understand how they arise and replicate. Cryo-EM is a great technique for this purpose. The author’s data shows they have been able to isolate a prion structure, build a high-resolution model, and reveal some peculiarities about the organisation of their prion contributing to our knowledge on prion structure.

Q1: Prion fibrils can be very hard to isolate due to resistance of these proteins to proteases and detergents. What challenges did you face during the extraction and isolation of the 263K prion?

Q2: PrPSC is a highly glycosylated structure. It has been argued that such glycosylation could only be accommodated with beta-solenoid structures, but having now solved the structure of 263K at high-resolution, you show that 263K has a PIRIBS-based structure. Other mammalian prions, for example from mice, have been predicted (though not directly shown) to have a beta-solenoid-based architecture. Why do you think there is a difference between your prion structure and the beta-solenoid model hypothesised for murine prions? Do you think prion structure varies in this manner due to the host species? Or could it be previous studies have performed cryo-EM on anchorless molecules i.e does having the anchor drastically alter the structural configuration?

Q3: What is the role of the Greek key motif in this prion (is this known?) and how might this play a role in altering the conformation of PrPC to PrPSC?

Q1: Prion fibrils can be very hard to isolate due to resistance of these proteins to proteases and detergents. What challenges did you face during the extraction and isolation of the 263K prion?

It is not so much that prion fibrils are difficult to purify, it is that their sticky, insoluble nature makes it challenging to separate them into the individual fibrils that are suitable for high-resolution cryo-EM analysis. Experimentation with a number of end-stage sample manipulations ultimately allowed us to collect the many thousands of particle images (movies) that were needed.

Q2: PrPSC is a highly glycosylated structure. It has been argued that such glycosylation could only be accommodated with beta-solenoid structures, but having now solved the structure of 263K at high-resolution, you show that 263K has a PIRIBS-based structure. Other mammalian prions, for example from mice, have been predicted (though not directly shown) to have a beta-solenoid-based architecture. Why do you think there is a difference between your prion structure and the beta-solenoid model hypothesised for murine prions? Do you think prion structure varies in this manner due to the host species? Or could it be previous studies have performed cryo-EM on anchorless molecules i.e does having the anchor drastically alter the structural configuration?

Initially researchers, including ourselves, doubted whether enough N-linked glycans could actually fit on a PIRIBS-based prion structure. However, recent in silico modelling has shown clearly that both PIRIBS and beta-solenoid-based architectures can, in theory, accommodate N-linked glycans. Nonetheless, as you have implied, no one has shown clearly that any mammalian prion actually has a beta-solenoid-based architecture. So far, beta-solenoid models have only been hypothesized based on features of low-resolution cryo-EM images and fiber diffraction patterns. Although the beta-solenoid models were plausible extrapolations from the crude data available at the time, those data were, and remain, insufficient to validate any beta-solenoid model. Further high-resolution work will be needed to determine whether, like 263K, all mammalian prion strains have PIRIBS architectures, or if some might have beta-solenoids. There are many prion strains to account for in mammalian species. Even without having other high-resolution prion structures available (yet), we know that prion strains within a given host species can differ solely in the conformation, rather than amino acid sequence. However, prion strain characteristics can also be strongly influenced by differences in amino acid sequence that can exist within and between species. As for whether GPI anchors drastically alter the structure of prions, a lot of data argues against it. For one thing, the beta sheet bands in infrared spectra of anchorless murine prion strains are very similar their wild-type (anchored) counterparts, but different from other strains. For another, murine prion strains can be passaged from wild-type mice into anchorless PrP transgenic mice and back into wildtype mice without altering characteristics of the strain in the wildtype mice. These serial passages showed that the underlying conformational template of these strains was not materially altered by being forced to propagate using only anchorless PrPC molecules in the transgenic mice.

Q3: What is the role of the Greek key motif in this prion (is this known?) and how might this play a role in altering the conformation of PrPC to PrPSC?

We do not know the role of the Greek key motif per se, other than to serve as one of the main compact hydrophobic cores of the fibril. However, an interesting feature of the Greek key is its protrusion from the seeding surface at one of the fibril ends. Perhaps this exposed, sticky, hydrophobic surface initiates interactions with PrPC that lead to its refolding onto the PrPSc template and, thereby, the growth of the prion.

The beta solenoid model is based mostly on structural data and restraints obtained from mouse prions but it was proposed with the assumption that it is universal for all PrPSc prions. And the same can be said about the PIRIBS model. Both models competed in a “sine missione” fight for some time. The fact that the solenoid model could accomodate stacking of the glycans whereas apparently the PIRIBS could not, gave a powerful edge to the solenoid because it established a definitive physical restraint. Therefore, the nearly simultaneous publication, about a year ago, of studies by Byron Caughey’s and my group together with Biasini’s of modelling studies showing that PIRIBS can accommodate the glycans, was a hard blow to that advantage. And of course the cryo-EM study by Kraus et al puts things really difficult for the solenoid model, as now all the burden of evidence is on it. So, is it possible that some PrPSc strains are PIRIBS and some solenoids? Yes; but it is very unlikely because a prionic conformation is already a “one in a million” event. A protein able to fold into two of such conformations? I woud say it would be a one in a billion event…A careful revision of the structure of GPI-anchorless PrPSc using the higher resolution cryoEM techniques will be key. For starters, there is a feature in our reconstruction that has always bothered me a lot: the two intertwinned protofilaments are very thin and have a very large gap of “vacuum” between them. That does not make physical sense. So perhaps the “protofilaments” are actually bulges in a flat ribbon. Anyways, we’ll see…In the meantime, using PITHIRDS, we have just found that infectious recombinant PrPSc features a PIRIBS architecture:
https://doi.org/10.1101/2021.07.20.453078
Jesus Requena