GSK3β is a kinase involved in a variety of different signalling pathways which are activated in response to a range of cues and is conserved from yeast to mammals (1). It is a key player in pathways such as the Hedgehog pathway, Wnt signalling, as well as G-protein coupled receptor-dependent pathways. Specifically, activity of the Wnt pathway is crucial in determining cell fate, polarity and migration (2). Its disruption has also been implicated to be tightly associated with tumour development (3). As such, the dissection of the biochemical mechanisms, activities and regulation of such versatile signalling proteins is vital. 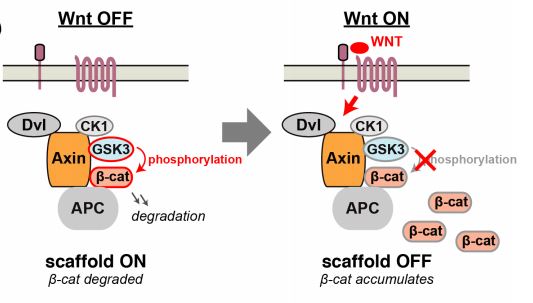 In this preprint, the authors aim to elucidate the mechanisms by which Wnt blocks β-catenin phosphorylation via Axin. This is achieved by asking whether Axin promotes GSK3β phosphorylation of β-catenin, which was tested by measuring the rate of reactions catalyzed by GSK3β with and without Axin in vitro.

Measuring binding affinities and rate constants of recombinant Axin with GSK3β and recombinant β-catenin
The authors first purified GSK3β from E. coli and also purified a recombinant phospho-Ser45-β-catenin. A full-length and mini Axin (mini fragment of the full-length), both containing GSK3β and β-catenin binding domains, were also purified. Subsequently, the binding affinities of both Axin and mini Axin towards GSK3β and β-catenin were measured with bio-layer interferometry, where Kd of the full-length Axin and mini Axin were 7.5 nM and 16 nM respectively. The Kd of the mini Axin for the recombinant primer β-catenin was 4 µM. These values are similar to previously published values of Axin binding affinity for human GSK3β (65 nM) and unprimed mouse β-catenin (1.6 µM), demonstrating that the recombinant Axin binds to both GSK3β and the recombinant β-catenin in vitro.
Next, the phosphorylation rates of β-catenin with and without mini Axin were measured using Western blotting, as it is specifically phosphorylated at sites T41, S37 and S33 (6). Thus, antibodies specific for these sites were used to quantify phosphorylated β-catenin. The Kcat was increased by 1.5-fold and Km was decreased by 2-fold in the presence of mini Axin, while Kcat/Km was increased by 3-fold (Figure 2b & 2c). the 2-fold decrease in Km shows that the mini Axin promotes GSK3β and β-catenin binding to some extent; however, these values are much lower than those previously published (7).

The β-catenin binding site on Axin is necessary for the Axin-GSK3β complex activity
Because the binding affinity of Axin for β-catenin was significantly weaker than that for GSK3β and it was previously demonstrated that the Kd of GSK3β for β-catenin was similar to that of the Axin-GSK3β complex, it was tested whether the β-catenin binding site of Axin was dispensible. Here, the BCD (β-catenin binding domain) of Axin was removed (Figure 3a) and its effects on GSK3β activity were subsequently tested using the same kinetic system. Compared to the presence of free GSK3β, the rate of phosphorylation of β-catenin in the presence of the Axin∆BCD-GSK3β complex appeared to be significantly lower (Figure 3b). Interestingly, free GSK3β is structurally very similar to GSK3β bound to Axin∆BCD. Moreover, this observation is reversed and the phosphorylation rate is restored when Axin is able to bind β-catenin. This indicates that somehow, the BCD of Axin is required for mediating GSK3β binding to β-catenin. 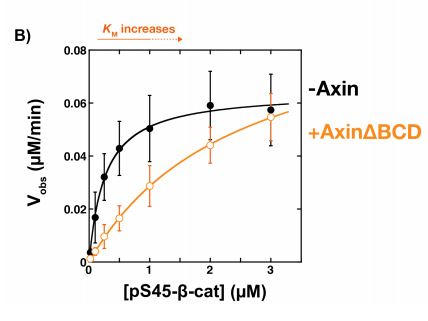 Axin suppresses GSK3β activity with CREB, a non-Wnt pathway substrate
Since Axin has the ability to weaken GSK3β binding to its substrates as well as promote β-catenin binding, it was investigated whether this was also the case with non-wnt signaling substrates. The reaction rates of GSK3β with CREB, another substrate of GSK3β, were measured using a short phosphorylated primed CREB peptide. It was found that the presence of Axin caused a 20-fold decrease in phosphorylation rate of CREB. This suggests that binding of Axin lacking a CREB binding site to GSK3β reduces CREB substrate binding.

Unprimed β-catenin leads to an accumulation of an inactive β-catenin-GSK3β oligomer
Following up the rate of phosphorylation in the presence and absence of Axin, it was asked why the 2-fold increase in rate with Axin was significantly lower than that in previous studies. This could possibly be due to the fact that these previous studies were performed with unprimed β-catenin, which means β-catenin has not been phosphoprimed (on Ser45) (8)(9). Consequently, this suggests that Axin may promote GSK3β binding to β-catenin via phosphopriming. Thus, additional experiments were performed with unprimed β-catenin.
It was found that while the unprimed reaction rates were 100 fold slower than when primed, the rate constants were not effected much by Axin. Moreover, without Axin, when the concentrations of GSK3β were varied with unprimed β-catenin, the rate increases steadily but levels off at 100 nM (Figure 4b), while in the presence of Axin the rate increases linearly (Figure 4a). It was suggested that in the absence of Axin, an inactive GSK3β-β-catenin dimer or oligomer is formed which leads to the plateau in rate, and somehow Axin prevents this formation. 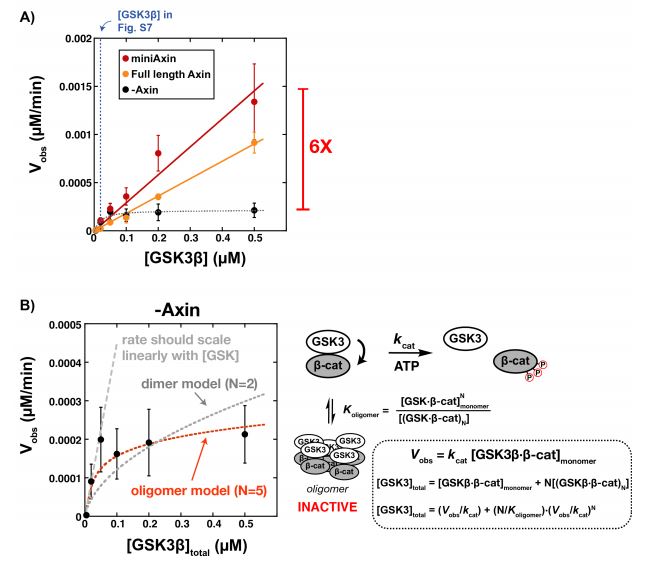 Interestingly, the inactive state of GSK3β-β-catenin is only formed in the presence of unprimed β-catenin, as this plateau was only observed in this experiment, but not with GSK3β and phospho-Ser45-β-catenin.

While this preprint focuses on a very specific functional mechanism of GSK3β and a small portion of the Wnt signaling pathway, it provides further insight into the possible behaviour of GSK3β in other signalling pathways based on its structure. We also learn that it has unexpected requirements of a scaffold protein for its functionality. Moreover, similar techniques with a kinetic model used in this study can also be transferred to elucidate many other mechanisms of GSK3β within other pathways to measure binding affinities and reaction rates catalyzed by GSK3β , perhaps mostly involving GSK3β-dependent phosphorylation.