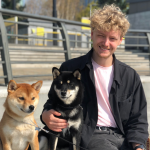 Phase separated bodies, or biomolecular condensates, are a hot topic in current biology after being implicated in an array of diverse and essential cellular functions[1]. These subcellular structures represent regions containing high concentrations of specific biomolecules that exist in a distinct phase: often compared to the droplets that form when oil and water are mixed. Organizing the cell in this way allows transfer of components between the condensate and the surrounding cellular milieu, but not mixing. As such, it is thought that phase separated bodies function to provide order within the crowded cellular environment (Figure 1).

In order to form, these complex phase-separated structures rely on multiple weak interactions, or multivalency. In proteins, this multivalency can be conferred through the presence of promiscuous structured domains capable of binding several partners, or, more commonly, poorly structured low complexity domains. The contributions made by proteins to phase-separation are relatively well understood, and a so-called ‘molecular grammar’ is being developed determining the contribution of specific amino acids to phase-separation capability[2]. Interestingly, in a cellular context these condensates frequently contain large amounts of nucleic acids, such as RNA. The specific RNAs present within phase separated compartments can massively impact the formation of these condensates, modifying key aspects such as viscosity, size and composition[3]. Moreover, testament to its role in phase separation, RNA can even phase separate in isolation. Yet, despite the clear functional importance of RNA in phase separated bodies, the precise properties of RNA that endow it with this ability are less clear and are a topic of great interest.

The TIS granule is a recently identified organelle, identified by Christine Mayr’s group in 2018 (Figure 2). This organelle intertwines with the endoplasmic reticulum, a classic and well studied example of a cellular organelle, to promote increased trafficking of specific proteins to the cell surface[4]. However, TIS granules differ from the classical view of organelles as membrane bound subregions of the cell, as it has no membrane and instead is formed by phase-separation. Like many other condensates, TIS granules contain large amounts of RNA, in particular AU-rich RNA. This study set out to understand the contribution made by this AU-rich RNA to TIS granule formation and structure.

TIS granules are typified by the presence of the TIS11B protein, an RNA binding protein expressed in a wide range of tissues[4]. As such, the authors began by assessing the impact of mutating the RNA binding domains (RBDs) within TIS11B. Mutating these RBDs altered the TIS granule structure, switching from a mesh- to a blob-like structure. The authors then provide an elegant control, whereby the RBDs from TIS11B were switched for RBDs from a different RNA binding protein that also binds AU-rich RNA, HuR. With this TIS-HuR chimera, the TIS granules reformed into a mesh-like structure again. This suggested that the RNAs bound by these proteins are vital for the appropriate structural formation of the TIS granule.

As both TIS11B and HuR bind AU-rich RNA, the article went on to examine the impact of different RNA species on TIS granule structure. TIS11B alone formed spherical droplets in-vitro, a property that is commonly observed for phase separating proteins. Interestingly, the majority of phase-separated bodies appear as sphere-like structures. In this case then, the TIS granule appears to be the odd one out, by forming a meshwork structure instead. After adding the 3’-untranslated regions (3-’UTRs) from RNAs that are known to localise to TIS granules, TIS11B reverted to the mesh-like structure seen in-vivo. Thus, reaffirming the role of RNA in defining the structure of this condensate. Importantly, the authors controlled for the effects of RNA length and GC content, features that have been described previously to impact condensate formation[5,6].

Due to the fact that neither RNA length, or GC content appeared to impact TIS11B network formation, Ma and colleagues next looked at RNA structure using in-silico simulations to predict the probability of base-pairing within the RNA molecule. Ultimately, they arrived at a length-normalized score (NED) for the number of structures predicted for a molecule of RNA. This revealed that RNAs with a more defined structure (a lower NED score) are less likely to induce network formation, and vice-versa (Figure 3A). Perhaps then, unstructured regions of RNA are free to interact with neighbouring RNA molecules through Watson-Crick base-pairing, whereas structured regions have already saturated much of their base-pairing potential by binding to themselves in cis. This seemingly reflects the finding in proteins whereby proteins with disordered regions scaffold and promote phase separation due to their increased multivalency.

Using this information, the paper continued to investigate whether network formation indeed relied on trans-RNA interactions using a deft experiment. Here, the 3’-UTRs from two RNAs that do not normally induce network formation, TLR8 and MYC, were added to purified TIS11B in-vitro. These RNAs are highly structured and are therefore less likely to take part in trans-RNA interactions. Indeed, when added to TIS11B together, these RNAs did not induce network formation. However, when they were artificially ‘stapled’ together through the addition of ‘dimerisation elements’ (sequences of RNA that are the reverse complement of one another), the TIS11B protein displayed the mesh-like structure seen in-vivo. Therefore, under conditions driving trans-RNA interactions, TIS11B adopts to a mesh-like structure (Figure 3B).

This work builds upon a previous publication from the same lab[4], which defined this novel TIS granule. To date, very little is known about this membraneless organelle, despite the fact that it seems to play a role in and augment important processes such as membrane trafficking. This pre-print looks at TIS granules at the molecular level, determining how the chemistry of biomolecular components drives the unique mesh-like structure that the TIS granule displays. By doing this, it provides not only a more detailed view of this poorly understood cellular compartment, but also a range of tools that can be used in-vivo to further interrogate the function of this granule. For example, it is now possible to use these findings to ask questions about what happens to the cell when the formation of this granule is impeded, or when specific RNAs are excluded from it, by altering RNA structure artificially.