Fexinidazole, a small molecule containing the nitroimidazole scaffold, has been identified as a potential new treatment for human African trypanosomiasis caused by Trypanosoma brucei gambiense (g-HAT), as well as for Chagas disease. Given the fatality of these diseases and the lack of safe and effective treatments, alternative therapies are urgently needed. First reported by Torreele et al. in 2010 [1], fexinidazole is a promising new treatment given its efficacy against both the blood and central nervous system stages of g-HAT. Unfortunately, progress on taking fexinidazole into the clinic stalled briefly when serological markers measured were suggestive of liver and bone marrow toxicities.

Therefore, Watson et al. had two aims in their study:

To fulfil the first aim, Watson et al. modelled the formation of the fexinidazole sulfone metabolite M2 as a “first-order absorption” process because fexinidazole is metabolised in vivo to two biologically active metabolites, M1 and M2 (Fig. 1); the latter is a good marker for bioactive exposure for the ten-day treatment of g-HAT using fexinidazole. The authors then made various adjustments to their model in the prediction of this ten-day fexinidazole treatment. 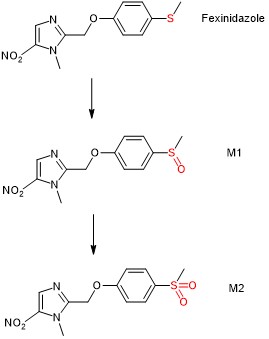 Figure 1. Metabolism of fexinidazole to biologically active M1 and M2.

From the data summarised in Figure 2 of their paper, the authors made two observations. First, the time-series data exhibited considerable heteroscedasticity. In the context of this paper, this means that the variability of liver transaminase elevation was unequal across the duration of fexinidazole exposure. Second, the authors noted a visible distinction of liver transaminase elevation between patients with high and low M2 exposures, which could be ascribed to total drug exposure.

The authors found that their model revealed a clear relationship between fexinidazole exposure and the outcome of hepatotoxicity, as measured using the both the absolute and relative elevations of liver transaminases. This trend predicted that approximately 50% of individuals with M2 exposures as distributed in the three studies for the g-HAT regimen would experience ALT and AST elevations more than 2.8 times and more than 2 times the baseline respectively; however, no such cases were observed.

Using the models constructed on indicators of bone marrow toxicity, Watson et al. found clear exposure-response relationships between M2 exposure and bone marrow toxicity. Specifically, the authors used neutrophil and platelet counts as indicators. In contrast, both the absolute and relative models measuring lymphocytes and haemoglobin levels did not appear to exhibit an exposure-response effect. This led Watson et al. to conclude that the decreases in neutrophil and platelet counts were predictable.

I selected this preprint for its significance in characterising the relationship between fexinidazole’s PK and pharmacodynamic (PD) properties—this preprint focuses on overcoming the current difficulties that must be resolved so that fexinidazole can be used on a wider scale for g-HAT and Chagas disease. Moreover, in highlighting this preprint, I hoped to shed some light on the difficulties associated with predicting the toxicity of a potential drug.

Three such challenges were discussed in this preprint:

Therefore, seen from this perspective, this preprint serves as a useful synthesis in bringing together data from previous clinical studies. In general, clinical studies require tremendous amounts of effort and resources to conduct, which means that they differ greatly in study design depending on the investigators’ resources and constraints. In conducting this research, Watson et al. face the mammoth task of reconciling apparent differences in these clinical studies and clinical trials, assess the prevailing literature, and recommend directions for future research.

Based on their findings in this preprint, Watson et al. concluded that the margin of safety for dose-related toxicity is enough to justify the use of fexinidazole in the treatment of g-HAT. Future directions will likely focus on establishing a firmer picture of fexinidazole’s safety profile, which may extend to elucidating its dose-dependent mechanisms of toxicity using in vitro cell-based and in vivo animal-based experiments. At the same time, the potential that fexinidazole exhibits idiosyncratic toxicity must also be considered. Such a possibility may be investigated by assessing clinical symptoms or markers characteristic of immune-mediated reactions to fexinidazole, such as antibody production.

On the other side of the fence, fexinidazole’s PK profile will be further studied. Better assays may be developed that allow researchers to sensitively and specifically measure for concentrations of fexinidazole, M1, and M2. The ability to measure the concentrations of these three moieties in other body fluids such as urine or bile will also serve to propel the understanding of fexnidazole’s PK forward.

* This part of the preLight originally read:

The authors have pointed out that this is not exactly correct. Their comments can be read in the author response.

The preLight author is immensely grateful to the preprint authors for their editing suggestions and feedback.

Thank you for contacting us regarding the fexinidazole PK-PD work. I hadn’t come across pre-lights and from a brief look, it seems a great platform for discussion of new work. Appreciate that you chose this paper for a quick summary article.

One extra thing to note since uploading to Biorxiv, fexinidazole has now been given the green light from the EMA. We did this work in order to reassure any concerns the EMA had about liver and haematological toxicity of fexinidazole.

Regarding questions for authors

This is a mistake – well spotted. The OVL values were defined as between 0 and 1, but then in Table 2 there are on the percentage scale. We will revise this in the submitted version, thanks for pointing this out!

Regarding comments in corrigendum

This isn’t exactly correct. Fexinidazole exposure is indeed the predictive variable we used. The two outcome variables were haematological timeseries (most importantly neutrophils) and liver (AST and ALT) timeseries. For ease of analysis we regressed exposures onto summary statistics of the timeseries data (maximum values, or maximum increases seen in the timeseries.