Battling the serpent under the flower: potentially dispatching snakebite with a dual-antivenom combination

Snakebite, a neglected tropical disease (NTD) with high rates of morbidity and mortality globally, is currently considered a priority by the World Health Organisation (WHO). Unfortunately, while the WHO hopes to mitigate complications and death arising from snakebite by 2030, antivenoms to date suffer from a few key limitations that preclude their utility.

First, antivenoms currently consist of polyclonal immunoglobulins purified from the plasma or serum of large animals hyperimmunised with snake venoms. As such, antivenoms are generally not highly specific: many antibodies in the polyclonal mix do not bind to venom toxins, thus compromising antivenoms’ efficacies against envenoming by different snake species. The large doses of foreign immunoglobulins often needed for the antivenoms to be effective in turn contribute to a high incidence of adverse reactions. Furthermore, the accessibility of these antivenoms often present difficulties due to the need for a clinical setting for intravenous delivery and for cold chain transport and storage.

To circumvent these limitations, Albulescu et al. aimed to develop a therapeutic small molecule antivenom mixture effective against venoms from vipers found in different geographical regions. In this preprint, the authors explore three drugs for their efficacy against snake venom—the snake venom metalloproteinase (SVMP)-inhibitor marimastat, the phospholipase A2 (PLA2)-inhibitor varespladib, and the snake venom serine protease (SVSP) inhibitor (nafamostat)—and demonstrate the effectiveness of a combination of marimastat and varespladib against envenoming using a mouse model (Fig. 1). 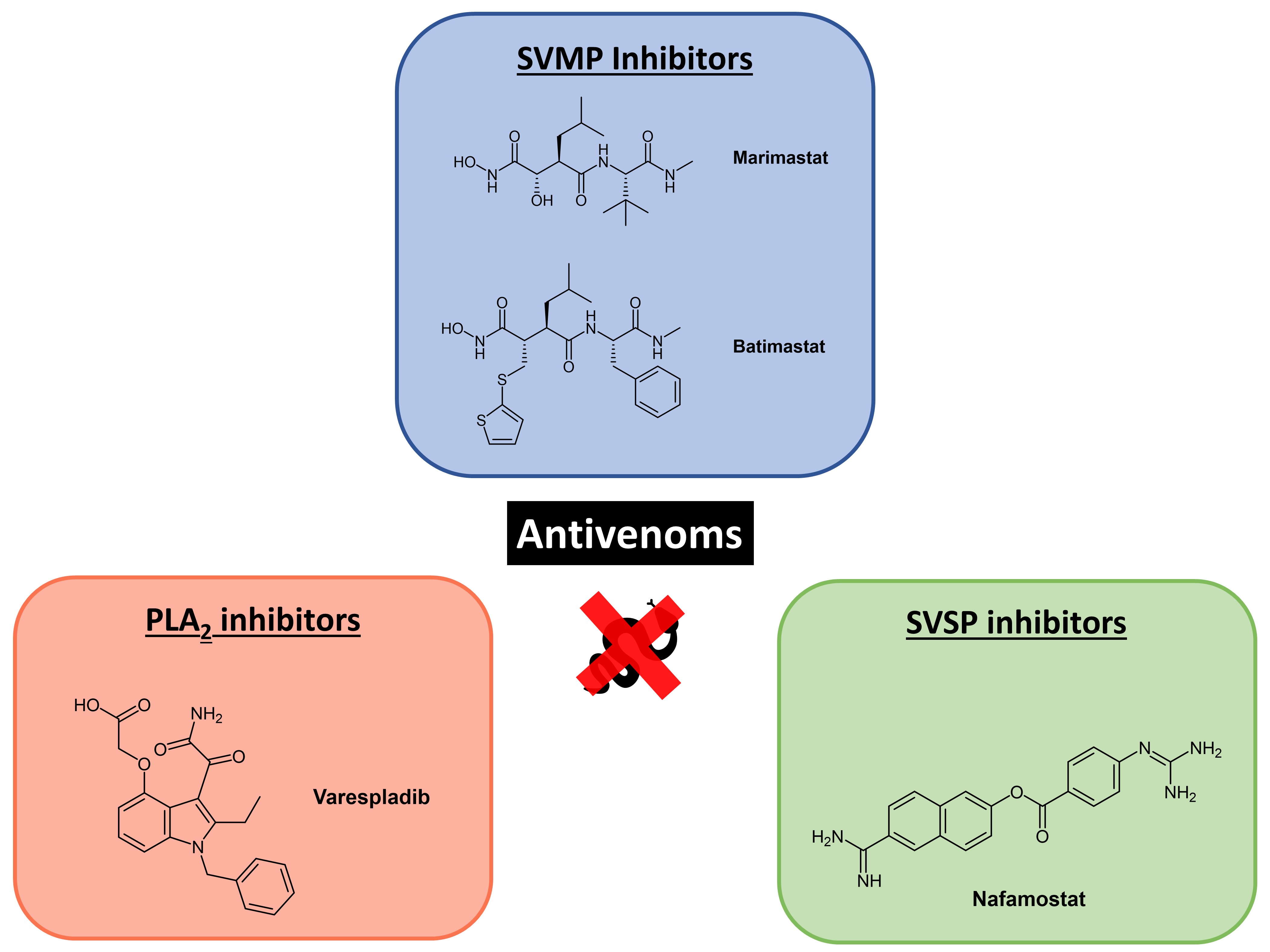 The authors also identified a secondary uninhibited anticoagulant activity in Daboia russelii venom arising from PLA2 toxins, which make up 35% of toxins in D. russelii venom. This led them to investigate the use of PLA2-inhibitor varespladib against D. russelii venom fractions. Indeed, Albulescu et al. showed that a combination of varespladib and marimastat restored clotting profiles to that observed in the control (preprint Fig. S2B).

Having established the rationale for using PLA2 inhibitors (varespladib) and SVMP inhibitors (marimastat), Albulescu et al. further demonstrate the potential utility of SVSP inhibitors (nafamostat) as antivenoms using an in vitro assay. In subsequent tests of the efficacies of varespladib, marimastat, and nafamostat using an in vivo model of envenoming by Echis ocellatus (Table 1), the authors concluded that nafamostat does not contribute significantly to venom neutralisation.

Since nafamostat’s apparent lack of benefit would not balance out the risk of using another drug in combination, Albulescu et al. focussed on the combination of marimastat and varespladib for further development in a preclinical challenge-then-treat model of envenoming that better mimics real life scenarios. After demonstrating that the inhibitor combinations had no apparent adverse effects, the preprint authors showed that the marimastat-varespladib combination significantly protected against the venoms used in the in vivo challenge, as measured by overall survival and quantified TAT levels (preprint Fig. 6A-F).

Table 1. Efficacies of varespladib, marimastat, nafamostat individually or in combination in an in vivo model of envenoming.

What I like about this preprint: the future in an instant

I selected this preprint for two reasons. First, this preprint offers an alternative application of drug repurposing—using drugs that were originally developed for another disease in the treatment of another indication. Previously, I wrote about the utility of drug repurposing in antimicrobial discovery; this preprint shows how drug repurposing can also be applied to antivenom development. Many of the drugs explored in this study, such as varespladib, marimastat, and batimastat, had been advanced to Phase 2 or 3 in clinical trials, so their safety and pharmacokinetic profiles are already somewhat established.

Moreover, this preprint complements the authors’ recently-published work on using metal chelators as potential antivenoms [2]. Drug discovery is unpredictable and difficult: candidates tend to have a high failure rate as they move into clinical trials. Developing a large pool of candidates with different mechanisms of action will therefore help to boost the chance that an effective antivenom is ultimately realised—in all our nights and days to come.