Diving into the 'D' Compartment of DSB Repair

The physical arrangement of chromatin within the nuclear space plays an important role in mediating many DNA-associated processes. For example, gene expression regulation, DNA duplication and DNA repair (1). Broadly, chromosomes are segregated into two ‘compartments’ known as ‘A’ (a gene dense and transcriptionally active) and ‘B’ (repressed chromatin). These regions are sub-divided into topologically associated domains (TADs), reflecting the level of contact between DNA regions. DNA regions within a TAD interact more frequently with each other than with DNA regions in other TADs. Within TADs the chromatin can physically ‘loop’ providing an additional structural layer (1).

We understand less about how chromatin organisation in the nucleus contributes to the cellular response to DNA injuries, which can drive instability in the genome.

Double strand breaks (DSBs) arise when both strands of the DNA helix break. If un-repaired, they can result in rearrangements, translocation events or the loss of DNA sequences thereby compromising the genome. At the heart of DSB repair are the kinases (proteins which transfer information to other proteins via phosphorylation), Ataxia-telangiectasia Mutated (ATM), and DNA protein kinase (DNA-PK). Both kinases are essential for orchestrating repair and preparing the chromatin environment by phosphorylating a variant histone H2AX (in mammals) to form yH2AX and subsequently recruiting other repair factors (2). Decades of work have characterised in detail DSB repair, though we are yet to understand why DSBs ‘cluster’ within the nucleus, forming sites of DNA repair, as this organisation could potentially promote more instability. For example, during the process of repair, DNA ends could be incorrectly joined if they are close together (3).

Here, the authors investigate how the chromatin structure alters in the presence of DSBs. Their work now supports the presence of a new G1-phase and DSB specific chromatin compartment (the ‘D’ compartment). They suggest that this compartment, which is associated with DSB clusters, could activate, and concentrate some DNA damage associated factors thereby generating an optimal repair response/environment to tackle DSBs. However, they show that such compartmentalisation may also account for some genome instability events seen in cancerous cell lines.

Here, the authors use a human cell line they developed called DIvA cells. DIvA (DSB Inducible via AsiSI) cells can be induced to produce ~ 100 DSBs using an endonuclease called AsiSI. Adding OHT (hydroxytamoxifen) induces the movement of the AsiSI endonuclease from cytoplasm to nucleus, where it then cuts the DNA (4). To assess changes in chromatin structure after a DSB, the authors performed chromatin conformation capture experiments including Hi-C and 4C-seq. Briefly, Hi-C preserves interactions between different regions of DNA via cross-links in an unbiased manner. Once the cross-linked DNA is digested, biotinylated nucleotides are incorporated at DNA ends. The fragments are then ligated together and after, the crosslinks are removed. This results in the formation of a hybrid DNA fragment containing DNA regions that are distant linearly in the genome but that were close physically in the nuclear space at the beginning of the experimental procedure. Using streptavidin (which binds biotin), these hybrid DNA fragments are isolated then analysed to measure the interaction frequency between these distant genomic loci (5). 4C-seq follows a similar concept but allows the detection of all potential sequences which are interacting with a specific DNA region of interest (6).

A) Damaged TADs are supported by ATM activity

Performing Hi-C in DIvA cells in the presence and absence of ATM kinase activity, revealed that if ATM activity was present, TADs containing DSBs were less in contact physically with other (non-DSB containing) TADs. In some cases, the DSB itself became isolated within the TAD. Whereas, inhibiting ATM activity in the presence of DSBs using an ATM-specific kinase inhibitor (KU-55933; 7), the authors found less interactions occurring within TADs and more limited spreading of yH2AX signal. They also noted that blocking ATM activity prevents DNA loop extrusion, which the authors previously demonstrated as a driver of DSB repair foci. Loop extrusion is a process by which chromatin ‘loops’ grows via the action of cohesin (8). In contrast, by inhibiting DNA-PK, which impair severely DSB repair, using a kinase inhibitor (NU-7441), they found increased intra-TAD interactions, accumulation of yH2AX and increased loop extrusion.

Thus, ATM activity appears to promote isolation of the DSB damaged region and can induce alterations to chromatin structure. 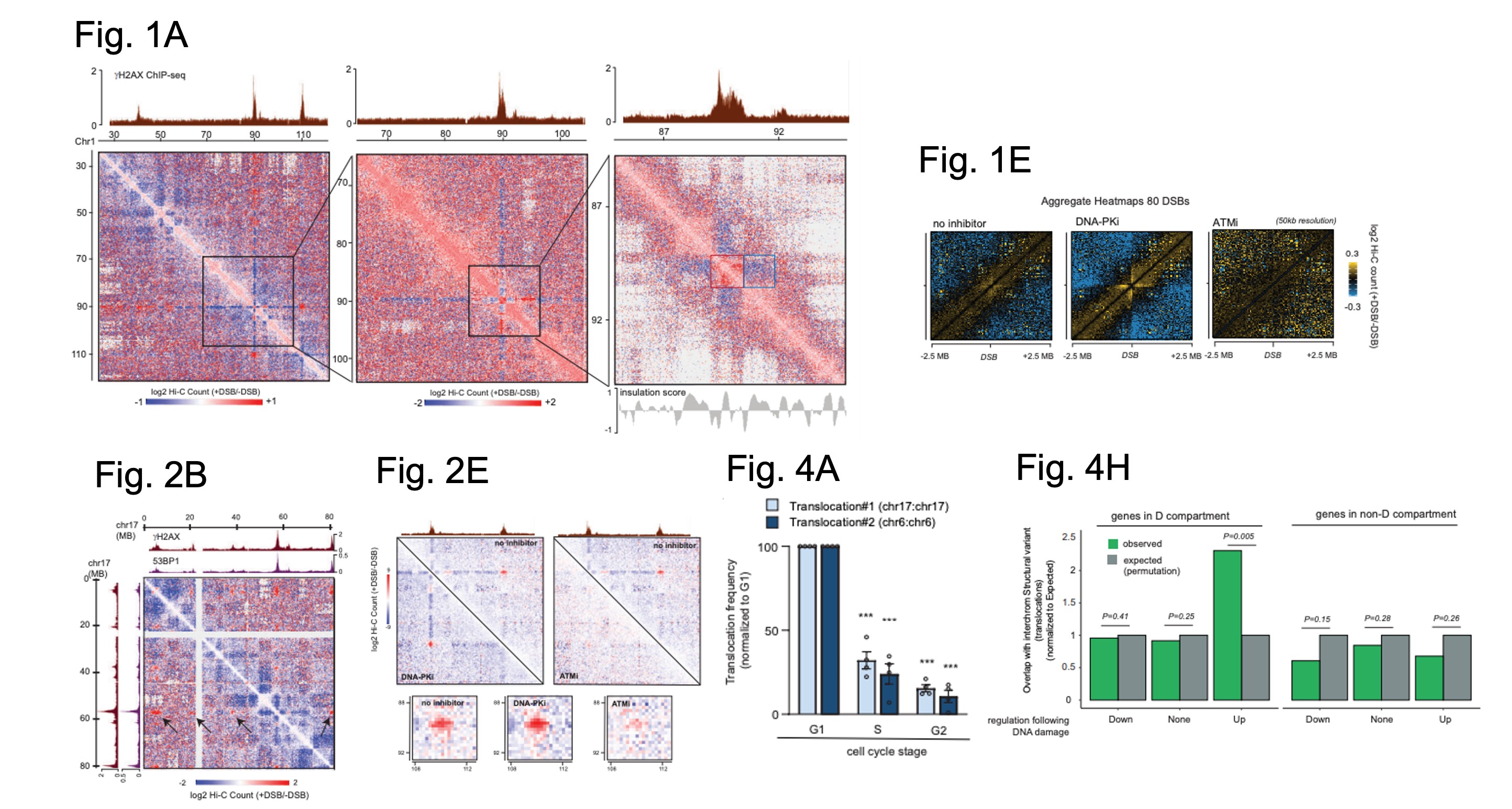 Figure shows a selection of figures from Arnould et al. Figure 1A shows Hi-C data from DIvA cells in the presence or absence of DSBs for part of chromosome 1 at three resolutions: 250 kb (left), 100 kb (middle) and 25 kb (right). The top tracks show the locations of yH2A signal indicating where a DSB has occurred. Red square (a damaged TAD with enhanced cis interactions), Blue square (decreased interaction between damaged TAD and nearby TAD. Figure 1E shows Hi-C contact matrices in the presence or absence of DSBs in control cells (left) and cells in which either DNA-PK (middle) or ATM (right) have been inhibited. Figure 2B shows Hi-C data in the presence or absence of DSBs on part of chromosome 17. The tracks on top and left show ChIP-seq defined locations of yH2AX and 53BP1. Black arrow = clustering of one DSB with several others on chromosome 17. Figure 2E shows Hi-C data as above (for a region on chromosome 1) but with the additional inhibition of either DNA-PK or ATM. Top tracks show yH2AX signal as defined by ChIP-seq. Boxes below show Hi-C between two yH2AX domains for each condition. Figure 4A shows qPCR data to assess translocation frequency for two different translocations after DSBs were induced in synchronised cells (as detailed on the graph). Figure 4H shows sites in which there are overlaps between sites of translocation events in cancer cells and genes associated with the D compartment. Expected overlap (grey, computationally defined), observed overlap (green). Figures adapted from Arnould et al., and made available under a CC-BY 4.0 International license.

The author’s data suggests that TADs containing a DSB can form close contacts (i.e cluster) with other DSB containing TADs. To find out what chromatin features were associated with these multiple TAD sites, they found yH2AX signal, other DSB associated chromatin marks (i.e loss of H1 histone, 53BP1 accumulation) and RNA polymerase II (RNAPII), all of which were determined via chromatin immunoprecipitation. Thus, DSB-associated/DNA repair factors are found at DSB clusters and these clustered DSBs came from sites of active transcription. By inhibiting ATM as before, the authors show that the clustering behaviour requires active ATM (but not DNA-PK whose inhibition enhanced the process). Lastly, the authors found that in synchronised cells (using thymidine which arrests cells at the G1/S transition), this clustering pattern appeared more prominently in G1 stage cells.

D) The D compartment – a hub of DSB repair?

I really like this study as I think it demonstrates well the power of mining next generation sequence data sets to retrieve novel and exciting biology. Here the authors combine some of their prior observations and across the field to address a key gap in our understanding of DSB behaviour. Though more work is needed to really understand the fine aspects of the clustering process, the results here now open a new avenue of investigation.

We have shown in this study that the damaged TADs that display this ability to cluster and form the D-compartment are TADs that carry DSBs induced in transcriptionally active loci (enrichment in RNA Pol II). On another hand, we previously reported that when induced in G1, these DSBs induced in active loci, display a strong repair delay (9), presumably because homologous recombination (the preferred repair pathway for DSB in active genes) is not available in G1. Altogether, we think that the persistence of these DSBs in G1 leads to an extended accumulation of chromatin marks (gH2AX, 53BP1…) that will favour their clustering within the ‘D’ compartment, potentially thanks to the liquid-liquid phase separation properties of 53BP1. We think that the formation of the ‘D’ compartment will ensure the activation of the DNA damage response and the repair of these persistent DSBs, potentially through an alternative repair mechanism.

This would definitely be an interesting question to investigate, we have not look yet at whether lncRNAs may be targeted to the D-compartment.

Q3: If clustering of DSBs may lead to instability, yet it occurs in healthy cells, why could clustering DSBs be beneficial as opposed to dealing with each as a separate entity? What benefits of DSB clustering that may outweigh the potential consequences?

Q4: Are there any key differences between the ‘D’ compartments of a normal cell versus an oncogenic cell?

This is a really important point that should be further investigated. We only identified the ‘D’ compartment in oncogenic cells (U20S cells) at this stage. Yet, DSB clustering has been observed in normal cells (for example in NIH3T3, (10); in MCF10A, (11); and in Mouse Tail Fibroblasts (MTF), (12), so one can speculate that D compartment may also form upon DNA damage in non-cancer cells.