Through the looking glass: Characterising the atropselective oxidation of PCBs by Human Liver Microsomes

Compounds in the polychlorinated biphenyl (PCB) family have often been implicated in various toxicities, especially neurological disorders. This is worrying for three reasons. First, mounting toxicological evidence points to an association between PCBs and behavioural disturbances in both in vivo rodent studies as well as etiological studies. Second, the ubiquitous nature of PCBs, which stems from their extensive use in manufacturing prior to their 1979 US ban, means that human and environmental exposure to them is inevitable. Third, despite the threat that PCBs pose to human and environmental health, relatively little is understood about how they are metabolised in the body.

Like pharmacological studies, toxicological studies are built on two main pillars: Toxicodynamics, the study of how ligand-target interactions lead to toxicity; and toxicokinetics, the study of how the body’s handling of the toxicant translates to noxious outcomes. The toxicodynamics of the PCB family are relatively well understood, but the toxicokinetics of the PCB family and its implications on toxicity are not as widely researched. In this study, Uwimana et al aimed to bridge this research gap by studying the metabolism of PCB 132 and its structurally-related congeners, which have been detected in both the air and in food sources. Specifically, Uwimana et al investigated the metabolism of PCB 132 to its hydroxylated metabolites (OH-PCB) by Human Liver Microsomes (HLM). 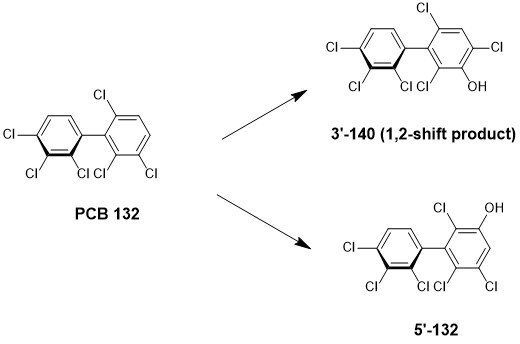 Figure 1. Metabolism of PCB 132 in incubation with HLM

This study corroborates findings of previous studies in two aspects. First, it illustrates that the metabolism of PCB 132 to the 1,2-shift product 3’-140 occurs via an arene oxide intermediate. Second, the position at which PCB 132 is metabolised also supports the current paradigm of structure-metabolism relationships established for the oxidation of PCB 132. At the same time, the findings from this study also contrast with studies demonstrating that 5’-132 is a major metabolite of PCB 132 in rodents, a juxtaposition which underscores the importance of recognising interspecies differences in biological research.

Mechanistic studies of energetics underlying the atropselectivity of the metabolism by reducing the PCBs to the simplest case—1,2,4-trichlorobenzene—also show that the metabolism of PCB relies mainly on the energetics involving just the 2,3,6-trichlorobenzene ring. At the same time, these explain the regioselective formation of only the 3’ and 6’ products over the 4’ and 5’ products as well.

This study of the metabolism of PCB 132 using HLMs also has three clinical implications:

I chose this preprint for two reasons. The first is that it answers the intriguing question of how PCBs are metabolised. While this question has traditionally been answered using animal models, interspecies differences in metabolism make it challenging for researchers to apply the conclusions in animal work to humans. By using HLM in this work to profile the metabolites of PCB 132 in vitro, Uwimana et al sidestep this difficulty. Furthermore, such an investigation also yields the opportunity to investigate the causes behind the differences in atropselectivity for these metabolic reactions.

The second reason for choosing this preprint is that it complements two articles by Uwimana et al earlier this year about PCB 91 [1] and PCB 95 [2], allowing Uwimana et al to compare across these members of the PCB family. Like PCB 132, the metabolism of PCB 91 also involves the formation of an arene oxide intermediate followed by a 1,2-chloride shift, whose energetics are largely determined by just the 2,3,6-trichlorobenzene ring. In contrast, PCB 95 was preferentially oxidised in the para position, and the 1,2-shift product was formed as the minor product.

This study adds to the previous work published by Uwimana et al and other researchers in understanding the nature of various PCBs. Comparing between the members of the PCB family aids in our understanding of how minute structural changes can lead to significant differences in the toxicokinetics of these compounds. At the same time, the progress in our current knowledge on the toxicodynamics of PCBs will also paint a clearer picture on the extent of the threat that PCBs pose to human and environmental health.

Future work in this field will likely involve comparing the toxicokinetics between the PCBs and expanding our knowledge of their atropselective metabolism with regards to the metabolising enzymes. These studies will be useful in two ways. The first route is more direct—a better understanding of the toxicokinetics of different PCBs will help industry players to reduce risks in using certain members of the PCB family. The atropselectivity in PCB metabolism of members suggests that the more toxic compounds may be replaced with safer alternatives, thus enhancing product safety to employees as well as consumers.

The other benefit of such a study is more indirect. The close relationship between pharmacology and toxicology allows researchers to easily apply the knowledge gained in one field to the other. Therefore, a more thorough understanding of metabolising enzymes will also enable pharmacologists to design drugs that exhibit improved pharmacokinetics, leading to better safety and efficacy.

The reasons for the formation of the para substituted metabolites of PCB 95 and PCB 136 extend beyond the energetics of the arene oxide intermediate to include steric and electronic interactions. Is it possible that, in the case of PCB 95 and PCB 136, the chirality of the PCB plays a role here? Given that the 1,2-chloride shift products of PCB 132 and PCB 91 are not influenced by the second aromatic ring, was the observation that PCB 95 and PCB 136 would demonstrate such a different property expected?

The reasons for the formation of the para substituted metabolites of PCB 95 and PCB 136 extend beyond the energetics of the arene oxide intermediate to include steric and electronic interactions. Is it possible that, in the case of PCB 95 and PCB 136, the chirality of the PCB plays a role here?

Thank you GHZ for taking interest in our work and for raising several interesting questions. In our manuscript we stated that “congener specific differences in the steric or electronic interaction of chiral PCBs, such as PCB 132, with specific P450 isoforms likely affect the rearrangement of the arene oxide intermediates to OH-PCBs”.  We have previously reported that chiral PCBs atropselectively interact with cytochrome P450 enzymes (Kania-Korwel et al. 2008). This earlier observation suggests that the orientation of chiral PCB molecules, such as PCB 132, inside the active side of the cytochrome P450 enzyme differs for the (+)- and (-)-PCB 132 atropisomers, which in turn may result in differences in the stereoselectivity of the oxidation. Indeed, our results demonstrate that (+)- and (-)-PCB 132 are metabolized with different regioselectivity by human cytochrome P450 enzymes.

Given that the 1,2-chloride shift products of PCB 132 and PCB 91 are not influenced by the second aromatic ring, was the observation that PCB 95 and PCB 136 would demonstrate such a different property expected?

Based on previous work in rodents (Kania-Korwel et al. 2011, Wu et al. 2013), we were expecting similar metabolite profiles in incubations with human liver microsomes for the PCBs you mentioned. Our computational studies also support this expectation. We were therefore surprised to observe pronounced, congener specific differences in the metabolism of these four chiral PCBs by human liver microsomes. Because our computational work does not account for the interaction of PCBs with the active site of cytochrome P450 enzymes, such PCB-protein interactions likely play a role in determining the regioselectivity of the metabolism of PCBs. A logical next step is to study the stereoselective metabolism of PCB atropisomers by specific cytochrome P450 isoforms using computational approaches.