Baby’s first steps: The association of drug use in European neonatal units with geographic region and gestational age

Drugs are extensively used in neonates to reduce morbidity and mortality, as well as improve their health. However, despite the vulnerable profile of these patients, their drug use not been well studied. The primary difficulty in conducting this research lies in methodological differences across studies done between countries, as the resultant inter-country variation makes the identification of any large-scale trends particularly challenging.

To bridge this research gap, Mesek et al. conducted a sub-study under the auspices of the European Study of Neonatal Exposure to Excipients (ESNEE), a pan-European project. The authors formulated two hypotheses: first, that gestational age (GA) would influence drug use regardless of region, because underlying c

onditions depend on GA; and second, that drug use should not depend on geographic region, for the same reason.

Therefore, the authors conducted this study, which, like most clinical studies, revolved around a framework containing a trio of core analyses following data collection. First, the baseline characteristics of the sample gathered from the study population were studied to ensure that the analysis would be appropriate, and the descriptive statistics were presented in Table 1 of the study. Then, the data were analysed to test for differences that answered the research question. Finally, interesting or unexpected trends were picked out and the causes underlying these observations were attributed to various factors.

(A) Analysis of participants’ baseline characteristics

In their study, Mesek et al. first presented the baseline characteristics of their sample of the study population in Table 1 of their preprint, which described the distribution of study participants based on geographic region—referring to countries that were broadly classified into East, North, South, and West Europe. A similar analysis was conducted for the distribution of the study population according to the level of maturity as measured by GA—preterm neonates were classified into “extremely preterm”, “very preterm”, “late preterm”, and “term”. The results of this latter analysis were presented in Table 2 of the preprint. Interestingly, differences were observed in the baseline characteristics of the participants across regions and across GA groups in this study. This was itself a subject for further discussion. In a vast majority of clinical studies, we would not expect significant differences to be observed in participants’ baseline characteristics due to their carefully controlled nature.

Mesek et al. were interested in the relationships between three factors: drug use, GA group, and geographic region (Figure 1). 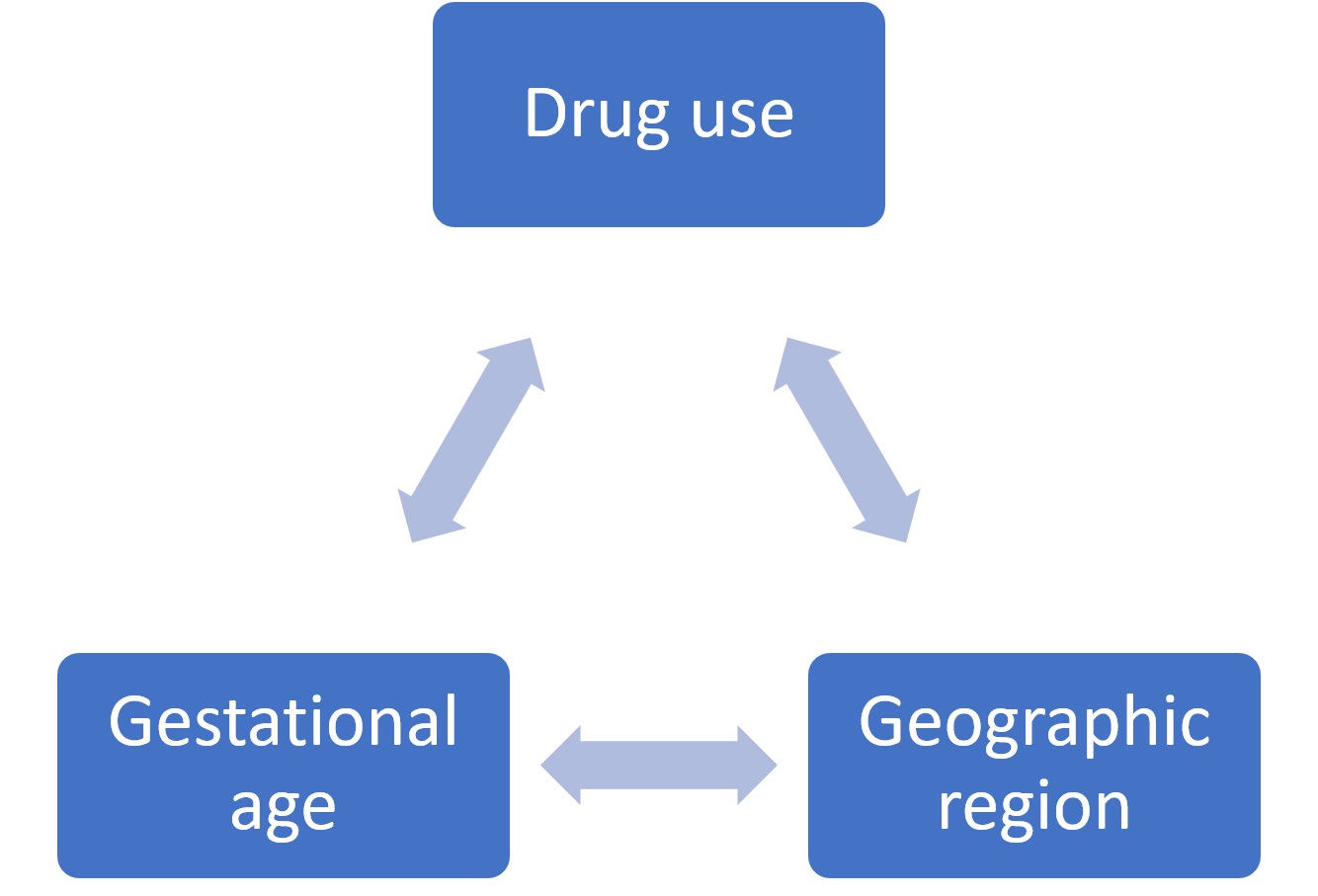 Figure 1. Relationships analysed by Mesek et al. in their preprint.

Comparison of drug use across different GA groups. The authors found a significant downward trend in drug use with increasing GA, with prescription rates among extremely preterms two times higher than term neonates. A few key trends were highlighted:

Comparison of drug use across different geographic regions. Mesek et al. highlighted West Europe, which had a significantly higher prescription rate than North, East, and South Europe. The authors then conducted both univariate and multivariate analyses, revealing significant geographic variations in all the most commonly used Anatomical Therapeutic Chemical (ATC) classes, except for cardiovascular drugs. Key trends are summarised in Table 1. 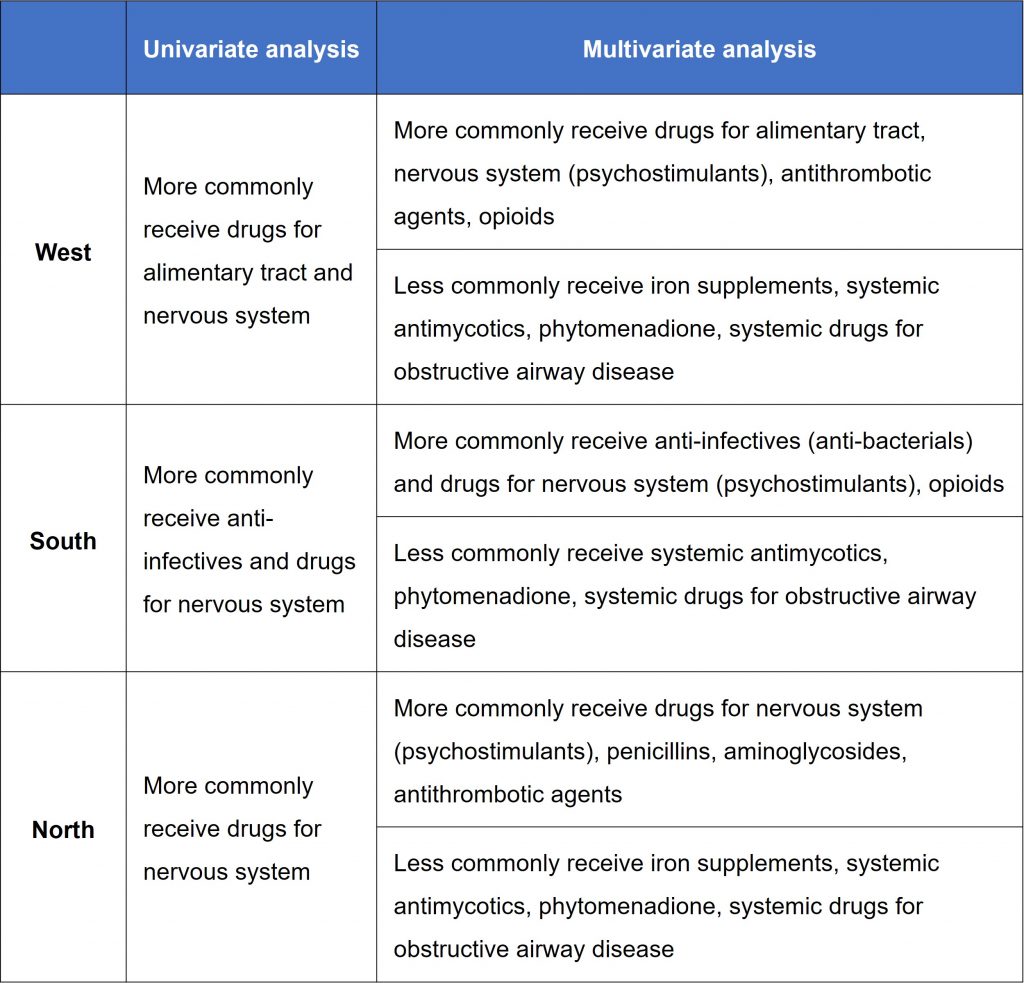 Comparison of drug use across different GA groups. Mesek et al. made two key observations. First, the use of anti-infectives was the highest in extremely preterm and term neonates. This was ascribed to separate factors. Extremely preterm neonates tend to have higher rates of infection; while in term neonates, infection is usually the most common cause of hospitalisation. Second, drug use generally declined in patients with older GA; this was attributed to recommendations in guidelines of clinical consensus established by learned societies.

(C) Attribution of interesting or unexpected trends to various causes

Comparison of drug use across different geographic regions. The authors’ findings in this analysis can also be subdivided into two groups: anti-infectives, and other drugs. The prescribing pattern of anti-infectives was attributed to both differences in microbial resistance rates and geographically-differing medical practices. In contrast, the causes of differences observed in the prescribing patterns of other drugs were not as clear. Mesek et al. propose that these were caused by conflicting evidence arising from the dearth of reliable studies and obsolete clinical practice that may not have incorporated the latest results derived from clinical research.

I selected this preprint for two reasons. First, as Mesek et al. point out, it is “the largest multi-country survey of drug use covering neonatal units across Europe and neonates of all GA groups”. Indeed, multicentre collaborations are difficult to conduct, but are tremendously valuable in two ways: they have significant amounts of statistical power, and they also allow for rigorous comparisons between centres in different regions due to the very nature of the study design.

The second reason for choosing this preprint is its significance in the field of clinical research. Due to its power and its multicentre nature, this study provides a compelling basis on which future research can be prioritised. It refines existing research gaps in drug use in neonates into more focussed areas which can be more rigorously studied on a practical level. For example, Mesek et al. note that the use of caffeine in reducing bronchopulmonary dysplasia in preterms with apnea has been met with conflicting evidence. Having identified these smaller, more specific research gaps, future studies can focus on collecting more specific data that would be better able to answer these research questions.

Future directions for this work will likely focus on mitigating the limitations highlighted by Mesek et al.:

Therefore, further efforts will focus on changing the study design, collecting more data on variables, and recruiting a greater number of people. To achieve this, more inter-country coordination and collaboration, with major European countries participating in this multicentre effort. Moreover, the methodology used in data collection may also be further standardised to reduce variation introduced from the experimental design.

At the same time, other auxiliary work that would be immensely useful to this study may also be done. These include studies that focus on not just prescribing or drug use patterns, but also healthcare professionals’ opinions on neonatal care. For instance, the frequency with which physicians and pharmacists conform to guidelines published by learned societies could be assessed and reasons for deviations documented to better elucidate the roles of cross-regional cultural factors in influencing healthcare professionals’ clinical decisions. At the same time, in-house guidelines on neonatal care from various healthcare institutions across the four regions could also be juxtaposed to shed further insight on the trends that have been observed in this work. All in all, the baby steps formed by this study point toward further areas for improvement on clinical guidelines for neonates. Hopefully, this will lead healthcare professionals to achieve a standard of therapy that can be customised to each individual patient profile.

On behalf of the co-authors, I would like to thank you for your interest in our study and for highlighting it with a nice overview.

We are grateful for the opportunity to comment the questions, however, we believe that these two questions have already been covered in our manuscript.