How do fish “go with the flow”? Multiple sensory systems are involved! Newton et al. developed a new tool to study this question—and found that the lateral line system helps fish efficiently swim into flow 🌊 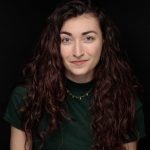 Fish and amphibians have a specialized method of sensing their bodies’ interaction with water, through structures known as the lateral line system. The lateral line system consists of clusters of hair cells across the entire surface of the body. These mechanosensory hair cells detect water displacement around the animal. The accessibility of these cells has made the zebrafish lateral line a classic model for ototoxicity studies, which explore drugs that are harmful to the ear and impact hearing and balance. Unfortunately, these often focus on effects at the cellular level, leaving little research on the downstream effects of ablating this system.

Swimming actions such as rheotaxis can be monitored to investigate the lateral line’s role in behavior. Positive rheotaxis is the tendency for fish or other aquatic animals to orient themselves facing into an oncoming current. This behavior involves many sensory systems such as the visual, vestibular, and tactile systems, but the extent to which the lateral line information is used remains unclear due to opposing conclusions from a number of studies (reviewed in Coombs et al., 2020). Different methodologies of studying rheotaxis—namely the various spatial aspects and speed of flow stimulus used—yielded conflicting results as to whether this system is required for the behavior at all.

Copper sulfate (CuSO4) and neomycin are two commonly used ototoxic agents to ablate the hair cells of the lateral line. The authors used both of these compounds to eliminate lateral line input because each induces apoptosis by different mechanisms, which may have later downstream consequences on behavior (Coffin et al., 2013). The authors sought to evaluate rheotaxis and swimming behavior in larval zebrafish with and without an intact lateral line system, and hypothesized that the two treatments would yield different effects on rheotaxis behavior. To investigate this question, the authors created a flow apparatus with fine spatiotemporal resolution which abolishes visual stimulation and certain vestibular cues.

Research question: How is the lateral line involved in a fish’s ability to perform rheotaxis?

Overall, larvae were broadly able to perform rheotaxis regardless of the integrity of their lateral line, which means that this system is likely not required for this behavior; however, lateral line-ablated fish were less efficient at swimming into a current. Without an intact lateral line system, the average angle with respect to flow grew more variable compared to controls, and fish swam farther in total and in shorter bouts. The authors additionally observed lesioned fish positioning themselves at the rear of the arena in contrast to controls being located at the front near the origin of the flow. Because fish could orient themselves into flow without a lateral line system to detect water motion and changed their position within the arena, it is possible that other tactile cues from the boundaries of the apparatus were used as a recruited reference.

While fish retained a coarse ability to rheotax, swimming behavior was altered with lateral line loss. As the authors predicted, the two treatments used in this study had different effects on the fish’s swimming behavior. Copper-treated fish had fewer rheotaxis events and showed increased latency between flow stimulation and movement, while neomycin-treated fish swam more frequently and traveled a greater total distance.

Aside from swimming, lesioned fish were less able to 1) orient themselves into flow and 2) hold that position. Where control fish made small adjustments in order to maintain their position, copper-treated fish made large distance moves while neomycin-treated fish made large turns. Also, control fish made heading changes before they were moved by the flow, but lesioned fish did not adjust their orientation until after the flow had displaced them. It is likely that without the innate water motion detectors, fish are less able to detect changes in flow and perform efficient reactions. Future studies will likely use the author’s new flow technique to test the involvement of other structures in swimming behaviors.

This preprint from the Sheets lab offers new insights into the lateral line’s role in swimming behavior. Previous studies have provided mixed evidence on this system’s involvement in behavior such as rheotaxis, and these data help clarify that the lateral line helps economize the swimming behavior. In addition to investigating this question, the work uses two different known ototoxic compounds which demonstrate the variety of consequences that may arise from lateral line injury. The authors’ novel methodology enables researchers to study flow-related questions with new resolution and a range of model organisms.

Questions for the Authors

1. Unfortunately we could not look at the vertical position of the fish in the water column but that is the next logical step. This is merely a technical issue that could be overcome by using a 45° mirror and changing the lighting, camera resolution, and settings. Often we are limited by the equipment we have on hand and the fact that pilot studies get refined with each new iteration. I suspect that LL ablated fish would rely more on tactile cues, which would be relatively simple to quantify using our machine learning and analysis techniques.
2. One way to tease this apart would be to create another rheotaxis arena which is the mirror image of the one we used. If the flow were clockwise instead of anti-clockwise (from above) and the larvae occupied the same portions of the working section then we could speak to handedness more strongly. If the intact fish continued to use the outside lane and ablated fish used the inside lane, then we could attribute the differences to flow regime created by the apparatus and refine the equipment more.