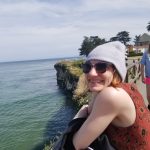 The last couple of decades have seen an explosion in interest in the functional roles played by the brain’s glial cells (Allen and Lyons, 2018; Barres, 2008). For instance, it has been shown that microglia and astrocytes play key roles in the refinement of maturing brain circuits by phagocytosing excess synapses (Chung et al., 2013; Schafer et al., 2012; Vainchtein et al., 2018). Despite the growing interest in glial cell biology, there has been little research exploring functions served by oligodendrocyte progenitor cells (OPCs) beyond their known role in serving as precursor cells for oligodendrocytes, which myelinate axons. OPCs persist in the adult brain long after the production of new oligodendrocytes has waned and mature myelination patterns have been adopted(Clayton and Tesar, 2021), and also respond to cues from both neurons and glia in differentiation and myelination, and form synapses with neurons (Barres and Raff, 1993; Bergles et al., 2000; Boulanger and Messier, 2017; Gibson et al., 2014; Pease-Raissi and Chan, 2021). These properties suggest OPCs play important roles across the lifespan of the brain that have yet to be characterized.

The authors focused on a visual circuit connecting the thalamus to the cortex. This particular thalamocortical circuit consists of inputs from the dorsal lateral geniculate nucleus (dLGN) of the thalamus synapsing onto neuronal targets in layer 4 of the primary visual cortex (V1) (Fig. 1 below). This circuit has been established as a model for the study of experience-dependent plasticity since it undergoes a period of heightened synaptic refinement dependent on visual experience during the third week of life in the mouse. This vision-dependent synapse elimination also continues into adulthood (Cheadle et al., 2020; Mataga et al., 2004).

The authors used immunofluorescence and advanced microscopy techniques to study how OPCs and microglia interacted with synaptic inputs during synaptic refinement in the developing and adult brain, examining both ex vivo slices and unanesthetized mice in vivo. Intriguingly, they observed phagocytosis of thalamic inputs to V1 by OPCs, as the presynaptic marker vglut2 was localized inside many OPCs and directed to lysosomes, presumably for degradation. This synaptic engulfment by OPCs was increased when mice reared in the dark during a critical developmental period were re-exposed to light, showing OPC synaptic engulfment is responsive to experience-driven neural activity. Interestingly, the authors showed that the light deprivation paradigm altered the nature of physical contacts between OPCs and microglia, as sensory deprivation shifted the contact site to more distal ends of OPC arbors. Moreover, pharmacological ablation of microglia during the light deprivation paradigm abolished the increase in OPC synaptic engulfment that previously occurred with light re-exposure. The authors also showed that OPC synaptic engulfment occurred in the adult mouse brain at P90. Together, the work shows a novel function for OPCs in synapse elimination across the lifespan of the brain, including in response to sensory experience, that depends on a signaling mechanism from microglia.

Phagocytosis of synapses by astrocytes and microglia is a well-studied function of glia and its dysregulation is thought to influence neurodevelopmental, neuropsychiatric, and neurodegenerative disease(Bolton et al., 2022; Chung et al., 2016; Hong et al., 2016; Yilmaz et al., 2021). While OPCs are thought to contribute to brain diseases through roles in myelination (Clayton and Tesar, 2021) this work opens up the possibility that OPCs may also affect pathogenesis of brain diseases through regulation of synapse elimination. In showing that OPCs contribute to circuit refinement beyond regulation of myelination, this work opens new lines of investigation into OPCs and the roles of glia in circuit function. This work also shows a novel regulatory role of OPC-microglia crosstalk in synapse elimination, adding to a growing body of work that demonstrates glia-glia communication modulates brain function (Peferoen et al., 2014; Vainchtein et al., 2018; Vainchtein and Molofsky, 2020). In short, this work is exciting because it advances glial cell biology and generates many new questions to research that could have important translational implications for brain disease. For instance, what is the nature of the signal sent from microglia to OPCs to mediate synapse engulfment and can this signal be targeted therapeutically?