Smc5/6 and the chromatin: Shedding light on this complex relationship using sptPALM

Our chromosomes (linear DNA molecules) are arranged and folded into a small confined space; the nucleus. How chromosomes fold, their placement in the nucleus and their ability to interact with each other (collectively their ‘higher-order’ structure) all contribute to modulating gene expression. In Eukaryotes, several complexes act in nuclear chromosome organisation including four Structural Maintenance of Chromosomes (SMC) complexes; the dosage dependent complex, cohesin, condensin and the Smc5/6 complex. The Smc5/6 complex, whose diverse roles include associating with double strand breaks (DSB) to assist homologous recombination (HR) repair, telomeres, the ribosomal DNA (rDNA) array and replication forks, is composed of Smc5 and Smc6 (1). Individually, both proteins look like long ‘arms’ meeting at a circular doughnut shaped region (‘hinge’) at one end (thought to interact with DNA) and a globular region at the other end which contains ATPase activity; little is known about the role of ATPase activity in the Smc5/6 complex. At the globular ATPase region, a sub-complex can interact to support Smc5/6 functionality: Kleisin (Nse4) and two KITE proteins (Nse1 and Nse3). Other Nse proteins also interact, including Nse2 (interacts with Smc5’s arm) and Nse5 and Nse6 (in yeast) (2). Despite Smc5/6 having important chromatin-based roles, much of the dynamics of its interaction with the chromatin remains unknown. Here, the authors used sophisticated microscopy and Smc5/6 mutants to understand these reaction dynamics.

To understand dynamic interactions between Smc5/6 and the chromatin, the authors performed single molecule tracking using photoactivated Localisation Microscopy (PALM) in live cells, which allows the capture of precise spatial information regarding the origin of the fluorescent signal (3). Briefly, when the sample is pulsed stochastically with an ultraviolet (UV) laser, the photoconvertible fluorophore mEos3 will ‘photoconvert’ from a green fluorescent signal to a red fluorescent signal. This process is repeated until all the mEos3 molecules have converted. Stochastic photoconversion of a small number of molecules at any one time means each fluorophore emission can be detected, the centre point of each ‘spot’ calculated and the information used to pinpoint the signal origin, within ~ 20nm. Here the authors fused mEos3 to the kleisin subunits of each SMC complex. Using S. pombe condensin kleisin (Cnd2; 4), as a proof-of-principle to monitor SMC complex behaviour at the chromatin in live cells and newly developed software ‘Spot-On’ (5) they tracked single molecules of Cnd2 in the nucleus and on the chromatin. Molecules bound to chromatin diffuse less than unbound molecules. This approach is known as single-particle tracking PALM (sptPALM). 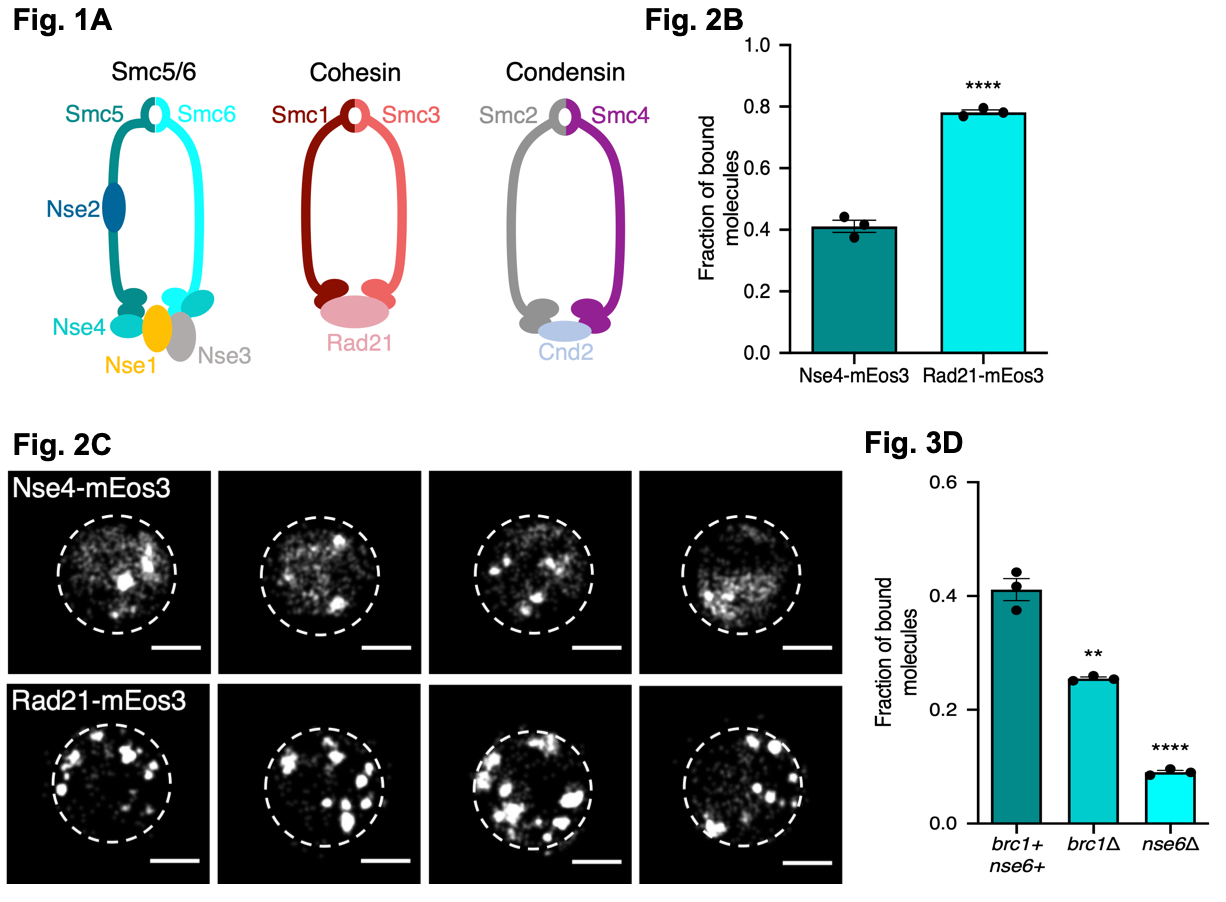 Using the above approach, the authors investigated the association of cohesin and Smc5/6 to the chromatin by fusing Nse4 (for Smc5/6) and Rad21 (for cohesin) to mEos3. Using their modelling software, the show Smc5/6 and cohesin interact differently with the chromatin, with cohesin binding more to the chromatin than Smc5/6 and the cohesin complex mostly formed nuclear foci where as Smc5/6 formed foci and showed a diffuse localisation.

To ask what factors might recruit Smc5/6 to the chromatin, the authors investigated two factors: Nse6 and Brc1. First, using sptPALM, they show Nse6 likely acts to load or stabilise the Smc5/6 complex. Next, they ask whether Nse6 or Brc1 are needed to localise Smc5/6 on the chromatin by deleting Nse6 or Brc1 in the Nse4-mEos3 cell line. Deletion of either gene disrupted the wild-type localisation of Nse4 with both genes resulting in a loss of Smc5/6 association to the chromatin. However, this loss was greatest when Nse6 was deleted supporting its role as a loader or stabiliser of Smc5/6. When cells were exposed to a genotoxin (methyl methanesulfonate; MMS) in wild-type cells, Smc5/6 was found to associate to chromatin, whereas in both deletion mutants, no chromatin association was detected (though this was independent of MMS treatment) supporting the role of Smc5/6 being loaded in response to DNA damage.

Next, the authors investigated if the ATPase activity of Smc5/6 was needed for chromatin association. By disrupting the ‘arginine-finger’ region needed for ATP interactions in either Smc5 or Smc6 in the Nse4-mEos3 cell line then performing sptPALM, they reveal 1) both mutants were sensitive to replication stress exposure, with the Smc6 mutant more so, 2) both mutants show less association to the chromatin with the Smc6 mutant showing a more extreme phenotype, 3) both mutants were largely unable to recruit Smc5/6 to the chromatin in the presence of MMS treatment. In all, the ATPase activity is needed for Smc5/6 recruitment to chromatin and individually, Smc5 and Smc6 show differences in their ATP binding capacity.

The Smc5/6 complex can bind both ds- and ss-DNA. By reducing the ability of their Nse4-mEos3 cell line to bind dsDNA (by disrupting Nse3), they reveal the Nse3-dsDNA interaction is likely needed for Smc5/6 recruitment to chromatin. Next, they asked if the same was true for ssDNA. By mutating regions in Smc5 and Smc6 needed for ssDNA binding, they show Smc5/6-ssDNA interactions are not needed for Smc5/6 to be recruited to chromatin but under DNA damage conditions (via MMS exposure), these Smc5/6 ssDNA-binding mutants were largely unable to associate with chromatin. This suggest ssDNA may ‘keep’ Smc5/6 on the chromatin during a damage event and to bring in other factors after Smc5/6 loading to regulate repair. Next, the authors asked if Smc5/6 doesn’t need ssDNA for recruitment to chromatin, then why may it need to interact with ssDNA? Using their mutants and combining them with a previously described system in yeast for monitoring homologous recombination (HR) dynamics they investigate this. In short, when the assay is induced, an arrested replication fork occurs within a defined genomic location. Replication can only then continue once another region (ura4) is used to restart replication. This reaction is HR dependent and can result in genomic instability due to large scale genomic rearrangements (i.e a non-homologous allele is used for restart) or when the re-started replication fork makes errors as it moves. Finally, if HR fails to occur, the cells are non-viable. They reveal, the ssDNA-binding deficient mutant presented with chromosome rearrangements indicating Smc5/6 may bind ssDNA to stop these rearrangements from occurring thereby regulating HR rather than controlling it.

I really enjoyed the use of sptPALM by the authors. By focusing on one technique and using it to address several questions, they reveal important findings about how Smc5/6 interacts with chromatin, including under damaging conditions. Here, they have really shown the resolution power of PALM and how it can be applied to successfully solve protein dynamics in live cells.

Q1: Have you performed sptPALM on Brc1 to localise this protein in the cell

R1: We are very interested in the behaviour of Smc5/6 interacting partners and will be extending our single-molecule technique to observing Brc1 and other potential interactors in the future. sptPALM is a great method to visualise the global chromatin association status of proteins and we are aiming to marry this technique with high-resolution genome-wide approaches to generate an increasingly more detailed understanding of Smc5/6 and the manner in which it is recruited.

Q2: Smc5/6 may also have important roles during S-phase. Do you plan to study the dynamics of its interaction by sptPALM within this particular stage?

R2: Smc5/6 has been previously implicated in stabilising stalled replication forks during S-phase and promoting restart of ‘collapsed’ forks. There is some debate as to when this activity is required and recent data from budding yeast suggest that this may be required in G2. In fission yeast G1 is very short and S phase is coincident with septation, which means that S phase cells are binucleate and the majority of cells are in G2. In our analysed we mainly tracked Nse4 in G2 cells but we also compared the behaviour of Nse4 in binucleate S phase cells to the uninucleate G2 cells and found no differences in chromatin association. We are aiming at using cell synchronisation techniques in fission yeast (with the caveat that many of these affect replication dynamics) to study the behaviour of Smc5/6 through the cell cycle using sptPALM.

Q3: Here you have used MMS to cause DNA damage. Would you expect similar dynamics of Smc5/6 following exposure to, for example, a replication poison like Hydroxyurea, which would result in ssDNA accumulation and the stalling of DNA replication? Or another genotoxin such as phleomycin, which induces DSBs?

R3: Smc5/6 mutants are sensitive to a range of genotoxic agents including hydroxyurea. Here, we focus on MMS due to the previous link drawn to Smc5/6 recruitment and Brc1 association to phosphorylated histone 2A which is known to occur after MMS induced damage. We are keen to tease out the response of Smc5/6 to different types of DNA damage and this will be a central focus in our next body of work.

Q4: You mention a possible pathway independent to Brc1 due to the weaker effect on chromatin association observed compared to Nse6 deletion. Do you think it is possible that Nse6 could instead compensate for the loss of Brc1 rather than a separate pathway operating?

R4: We don’t think that Nse6 is compensating for the loss of Brc1 firstly due to the significant decrease in chromatin association in an Nse6 deletion. In this background almost all of the chromatin associated Smc5/6 has been lost suggesting that Nse6 is ultimately required in all loading reactions. Deletion mutants of nse6 are also significantly more sensitive to DNA damaging agents than brc1 deletes.

Furthermore, Brc1 was identified as a high-copy suppressor of the ATPase deficient smc6-74 mutant. This suppression was later shown to rely on error prone DNA repair pathways suggesting that it is not directly affecting loading of the complex and acts more as a recruitment scaffold. Recent data in budding yeast demonstrated that the Brc1 homolog Rtt107 also interacts with repair proteins Mms22 (E3 ubiquitin ligase) and Slx4 (endonuclease).