Background of preprint: not a stranger to the target

The important roles that RNA structure and function play in biology has led to great efforts to target it with synthetic ligands. One such class of RNA, microRNAs (miR), can be targeted in three ways (Fig. 1). The first involves the binding of oligonucleotide-based antagomirs to mature miR via base pairing [1]. The other two ways involve the use of small molecule mediators: small molecules can either bind to primary or precursor miR transcripts and inhibit biogenesis [2-4], or they may target precursor miR structures, triggering cleavage of the RNA target [5-7]. 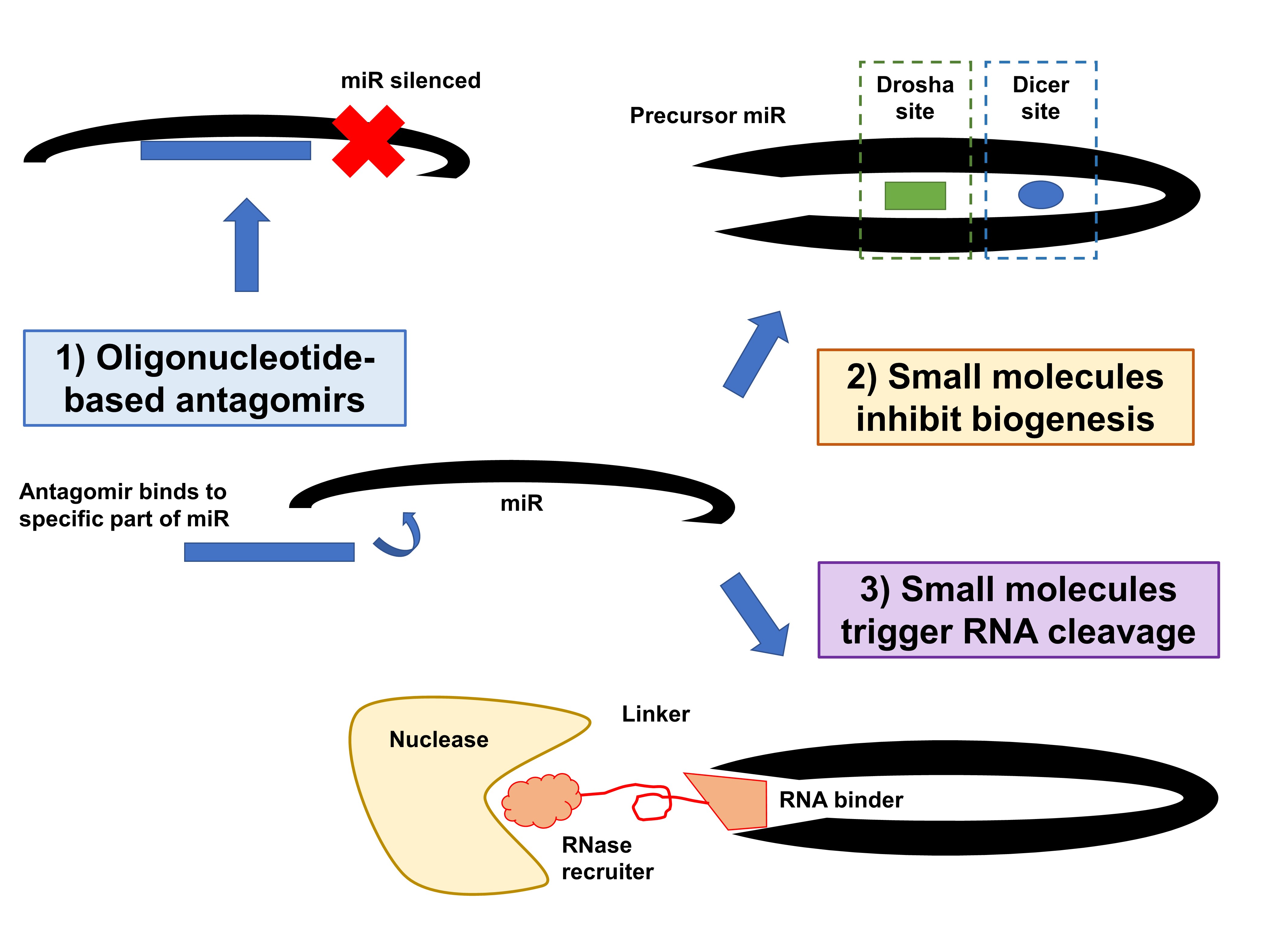 In their preprint, Haniff et al. aimed to selectively modulate the activity of miR-200c, a member of the miR-200 family implicated in β-cell apoptosis and type 2 diabetes [8,9]. Sequence homology among miR-200 family members may complicate the adoption of oligonucleotide-based approaches in targeting these RNA sequences. Instead, the authors identified differences in the structures of precursor miRs, which they could selectively target using small molecules (preprint Figure 1).

Key findings of preprint: breaking it down to dust

First, Haniff et al. analysed the miR-200 family sequences and structures. Despite the high sequence homology observed, the authors found significant differences between their precursors. This suggested that a ligand that targeted the structures of these precursors may selectively target different family members.

Comparing TGP-200c to compound 1, the authors found that TGP-200c bound 22-fold more avidly (Kd = 50 nM) and was 10-fold more potent in vitro (IC50 ≈ 200 nM). Two further experiments reinforced this. First, the authors mechanistically confirmed the mode of binding by mutating the binding site of TGP-200c, identifying the elements needed for this binding to occur. Second, TGP-200c was a 10-fold more effective competitor in occupancy studies.

Finally, Haniff et al. showed that TGP-200c potently inhibits miR-200c biogenesis selectively: it decreased miR-200c levels and increased pre-miR-200c levels, and had no effects on other members of the miR-200 family. Because miR-200c represses the expression of certain genes in type two diabetes, the authors also used Western blots to show that TGP-200c in turn stimulates the expression of these genes. Indeed, the authors found that TGP-200c exhibits selectivity in its effects on the global proteome.

What I like about these preprints: bursting the barricades

Traditionally considered “undruggable” [10], RNAs are a class of targets whose targeting mainly involves the use of interfering RNAs. The authors’ discovery of TGP-200c, a small molecule probe, joins a growing wealth of literature that demonstrates the possibility of using small molecules to selectively modulate RNA.

It is particularly important that Haniff et al. have demonstrated that it is possible to selectively modulate RNAs (specifically pre-miR-200c) using TGP-200c. Selectivity and affinity are key concepts in drug discovery: they respectively determine the safety and potency of the compounds. Within the context of the miR-200 family, whose members may also play other roles in embryonic development and tumour metastasis [11], these factors will be even more pertinent. They will become important considerations in clinical use, especially in special populations such as patients in geriatrics, paediatrics, pregnancy, and lactation; as well as in patients suffering from organ failure.

Future work: marching on to the beat of the drum

Moving forward, researchers will seek to answer many questions surrounding this technology as it winds its way through development. These outstanding questions largely fall in two categories: the science underlying TGP-200c, as well as its clinical characteristics. To enhance understanding and drive further structural analysis of these molecules, for instance, researchers may attempt to obtain crystal structures of complexes formed between ligand and target in the future. This will help them better visualise the interactions between TGP-200c and the binding site (preprint Figure 3), allowing for further optimisation. Interspecies differences between mouse and humans will also need to be addressed. Because this research was conducted in MIN6 mouse pancreatic β cells, making TGP-200c amenable to human use may present another challenge.

Second, the clinical properties of TGP-200c will also need to be characterised. In vivo, how efficacious or potent is TGP-200c, and what toxicities might it display? Pharmacokinetics will also play an important role. TGP-200c may be a small molecule, but it has a reasonably high molecular weight exceeding 1000 g/mol, so it may exhibit unusual pharmacokinetics. How might it be absorbed, distributed, metabolised, and excreted? Will oral dosing be possible?

Despite the difficulties ahead, this effort in drug discovery is a truly promising one. After all, science may be challenging, but—in the words of Lettie Lutz, a character from The Greatest Showman—still we continue to reach for the sun.