Article now published in Chemical Research in Toxicology at http://dx.doi.org/10.1021/acs.chemrestox.0c00294

Adverse drug reactions (ADRs) are a major source of economic and clinical burden worldwide. Not only do they cost billions of dollars in the USA alone, but they also weigh heavily on healthcare systems and can account for up to 30% of hospital admissions in the USA and Canada [1]. Although the majority of ADRs are dose-dependent and predictable [2], quantitative information on drug safety has not been organised systematically [3,4]. As such, the prediction of in vivo toxicities in humans remains a challenge.

One common target associated with toxicity is the human ether-a-go-go-related (hERG) voltage-gated cardiac ion channel; drug candidates are screened for the risk of hERG-associated cardiac toxicity before advancing them to clinical trials. However, current late-stage preclinical hERG safety assessments test for cardiac toxicity in dogs or primates at levels far exceeding human therapeutic free plasma cmax (TFPCmax). Yet, the hERG therapeutic index in humans cannot be predicted reliably in the absence of human pharmacokinetic data, leading to a Catch-22 in which safety indices are instead generated based on off-target potency/exposure relationships. Consequently, predictions generally remain inaccurate, despite the significant amounts of time and effort spent on the mitigation of cardiac toxicity.

In this preLight, we look at two preprints by Smit et al. and Wan et al. in mitigating these issues associated with toxicities. In the first preprint, Smit et al. target the problems associated with the prediction of pharmaceutical toxicities by analysing data amassed from Food and Drug Administration (FDA) Adverse Event Reporting System (FAERS), Side Effect Resource (SIDER), and in vitro bioactivity data from the CheMBL database (supplemented with ligand-based target predictions). The key difference between FAERS and SIDER lies in their information sources (Table 1): SIDER comprises data from clinical trials, while FAERS also contains post-marketing reports of adverse events (AEs) submitted by healthcare practitioners, consumers, and drug manufacturers. AEs are any adverse episodes following the consumption of a drug; ADRs are AEs for which causality with the agent has been established.

In the second preprint, Wan et al. used biodynamics principles to understand the structural basis of hERG blockade and make hERG safety assessment more relevant in vivo. Specifically, the authors investigated the hERG blockade by trappable and non-trappable compounds, respectively defined as compounds that are trapped within closed hERG channels and compounds that are expelled during closing [5].

The authors first compared the FAERS and SIDER datasets (Table 1), then evaluated each dataset by comparing them to three previously reported safety target panels [4,6,7], and found that using plasma concentrations resulted in fewer false-positive signals compared to using a constant cut-off. Despite the greater positive predictive values (PPVs) for analyses using plasma concentrations cut-offs, Smit et al. found that the predictive power of the analyses was limited by data availability. Interestingly, the authors observed lower PPVs for FAERS compared to SIDER; they attributed this difference to the greater noise and uncertainty associated with FAERS. Further calculations of value-added PPVs also indicated that target bioactivities provided additional information, and that the PPVs were not solely driven by the prevalence of AEs.

Smit et al. then conducted analyses of PPVs by target and organ class (Table 2). This showed that PPVs were generally high for lyases, while no clear pattern emerged for the analysis of PPVs by organ class. The authors also found a necessary trade-off between the PPVs and detection of AE-associated drugs, which led them to conclude that no single bioactivity is a strong indicator of AEs in both the FAERS and SIDER datasets.

Table 2. PPVs by target and organ class, listed in descending order of PPVs. 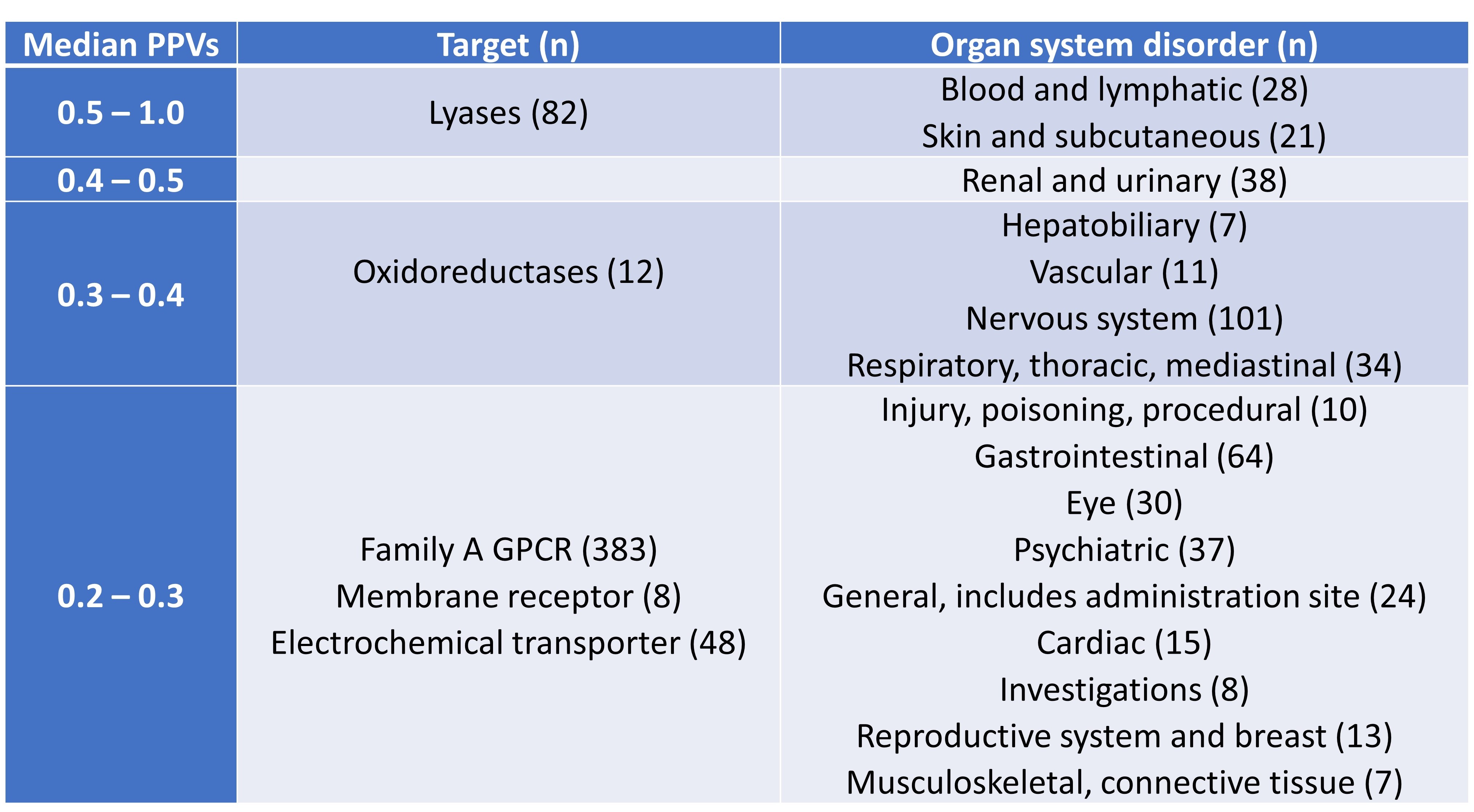 Next, Smit et al. identified a few significant target-AE associations in their study (Table 3), though these interactions were not uniformly distributed across system organ classes. For example, metabolism and nutrition disorders, as well as nervous system disorders, were more frequently associated with certain pharmacological targets. Moreover, only a small fraction of unique AEs was associated with target activity in safety pharmacology screens. It is to this second issue to which we now turn. 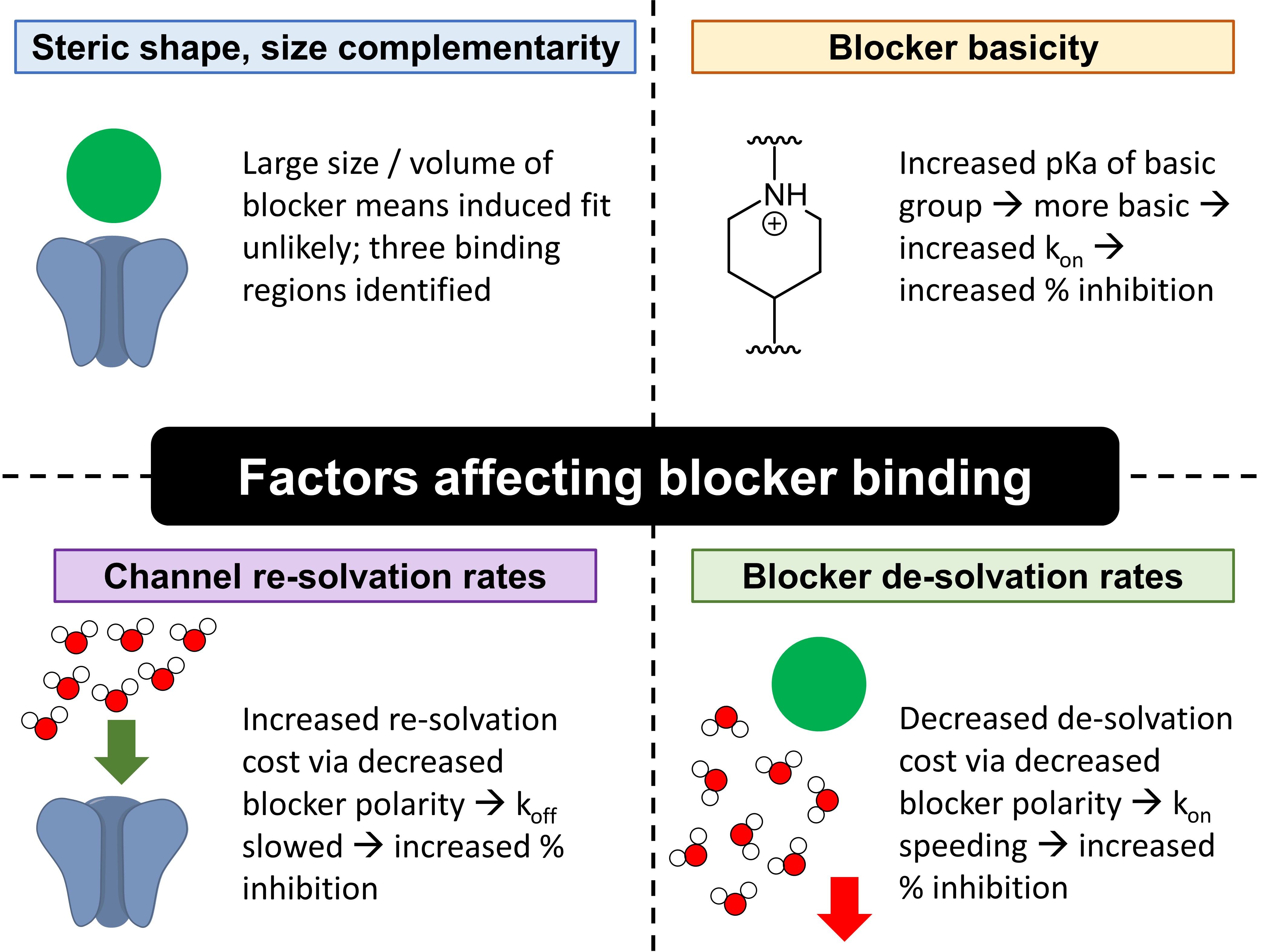 By performing computational analyses (preprint Figure 4), Wan et al. identified structure-kinetics relationships, the kinetic corollary of structure-activity relationships (SAR) (Fig. 1), as well as structure-trappability relationships. Specifically, they showed that trappable and non-trappable analogues exhibit planar and non-planar conformations respectively (preprint Figure 7); the non-planar conformations of non-trappable blockers tend to sterically clash with a region of the pore that may constrict in the closed-channel state. In light of these findings, Wan et al. proposed a set of recommendations to overcome problems traditionally associated with the assessment of hERG blockade (Fig. 2). 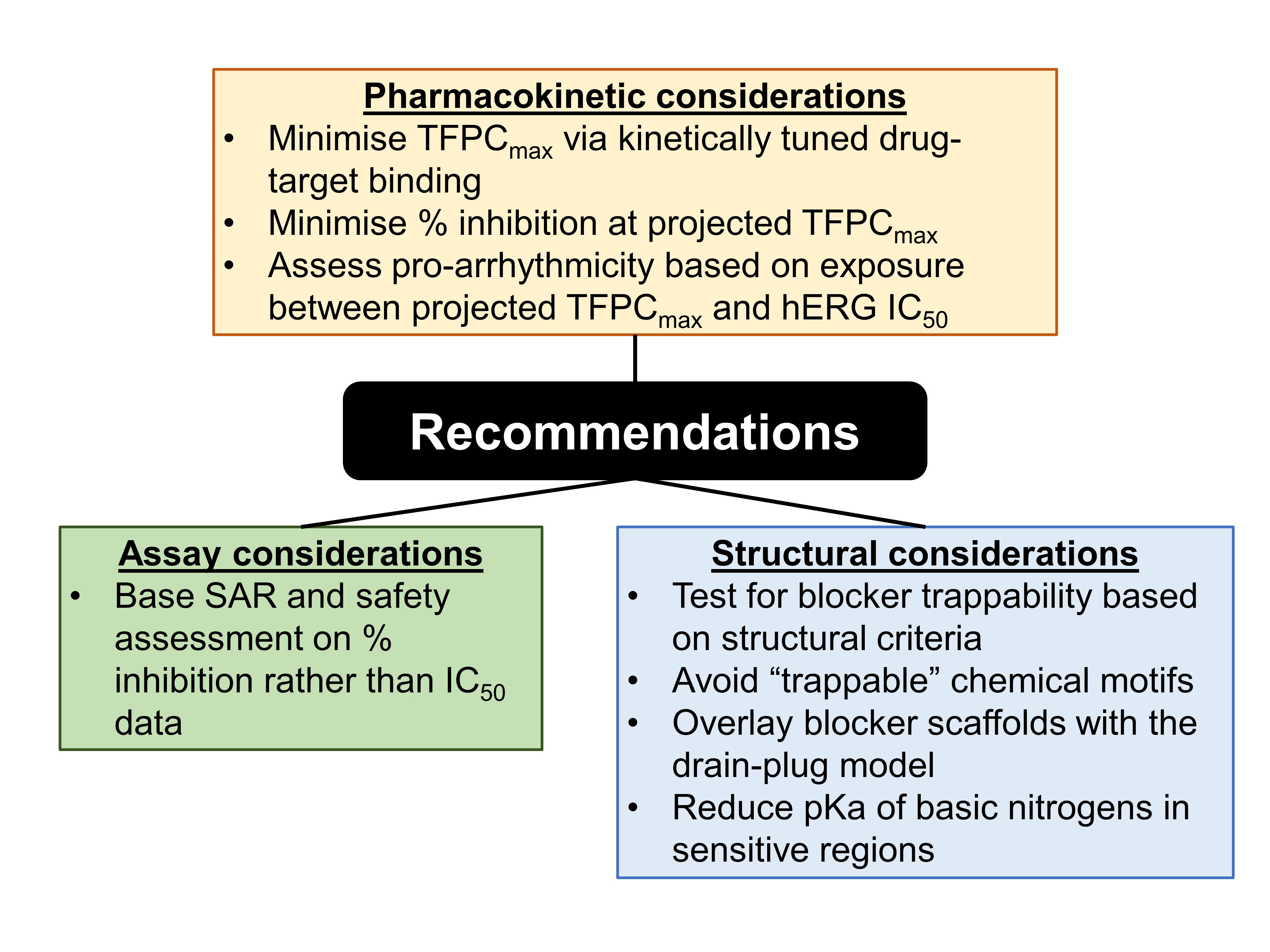 Despite the headway made by toxicologists and pharmaceutical scientists in developing in silico, in vitro, and in vivo models to predict or test for toxicity in drug candidates, the estimation of drug toxicity in humans remains a formidable challenge. Indeed, toxicity continues to be among the most common reasons for drug candidate failures [8]. Furthermore, the financial and clinical burden arising from ADRs clearly indicate the need for better toxicity predictions.

I selected these two preprints by Smit et al. and Wan et al. for their complementary approaches in mitigating this problem. Smit et al. used data analytics to sieve through two large global datasets (FAERS and SIDER). By considering activity across multiple targets, the authors improved the detection of AE-associated drugs in both datasets, thus demonstrating the orthogonality of information provided by different targets. In fact, this orthogonality extends to the SIDER and FAERS datasets as well—the authors found that the target-AE associations differ significantly between both databases. Trawling through such large amounts of data allowed the authors to generate multiple hypotheses on which further laboratory research could be centred.

Smit et al. also emphasised the importance of using plasma concentration data to enhance the predictive power of their analyses. Such a finding is not surprising: after all, plasma concentration data is literally the lifeblood of the pharmacokinetics field. For the work conducted by Smit et al. to gain greater regulatory and clinical acceptance, therefore, alternative methods to using in-human data to conduct such pharmacokinetic analyses will need to be established.

In the pharmaceutical industry, a few toxicities have regulatory and clinical implications: these include in vitro screens for carcinogenicity and developmental toxicity, as well as the cardiac, respiratory, and neurological organ systems. In their preprint, Wan et al. proposed an alternative method to improve the prediction of cardiac toxicity arising from hERG channel blockade: they identified target receptors, plasma concentrations, and structural properties commonly associated with hERG channel blockers, and offered some recommendations on how drug researchers might avoid these toxicities.

Future efforts will likely continue in the same vein; pharmacologists and toxicologists will continue to develop methods that allow them to draw better conclusions from precious, rare, in-human data. A common joke in pharmacology circles is that the word “pharmacy” cannot be spelled without the word “harm”. But with hard work and some luck, we might come to learn how better to reduce it.

[8] Van Norman GA, Limitations of Animal Studies for Predicting Toxicity in Clinical Trials: Is it Time to Rethink Our Current Approach?, JACC: Basic to Translational Science 4(7) (2019) 845-854.