Anti-bat ultrasound production in moths is globally and phylogenetically widespread

Screaming your toxicity: ultrasound production in moths as a warning to bats massively more prevalent than previously thought 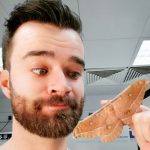 Bats and moth are embroiled in an acoustic arms-race between predator and prey which has been raging on since bats first evolved echolocation, some 65 million years ago. Echolocating bats are excellent hunters of nocturnal insects, they localise and target their prey using a sophisticated series of ultrasonic clicks to illuminate their prey with sound and listen for the echoes bouncing off them. The presence of echolocating insectivorous bats has led to a host of defences in insects which fly by night, with moths in particular evolving a diverse range of strategies to help them survive. Many moths have evolved ultrasound sensitive ears, allowing them to detect approaching bats and take evasive manoeuvres. Some of these moths have even evolved the ability to produce ultrasound of their own, warning a bat that they are toxic and not to be eaten. Some moths do not have ears, yet have evolved passive defences to increase their chances of survival, such as acoustic decoys and acoustic camouflage. Now, a preprint on acoustic defences in moths has revealed that certain adaptations are much more widely spread amongst the group than previously thought.

Warning signals are well known in visual systems, but less so in other sensory modalities. Ultrasonic signalling amongst moths was mostly thought to occur in one group, the tiger moths, with a few other examples dotted amongst other moth families. However, the current study lead by Jesse Barber of Boise State University has revealed that this type of signalling is much more widespread than previously thought, with their study identifying ultrasound production in an additional 52 new genera and 8 subfamilies previously unknown to produce ultrasound. 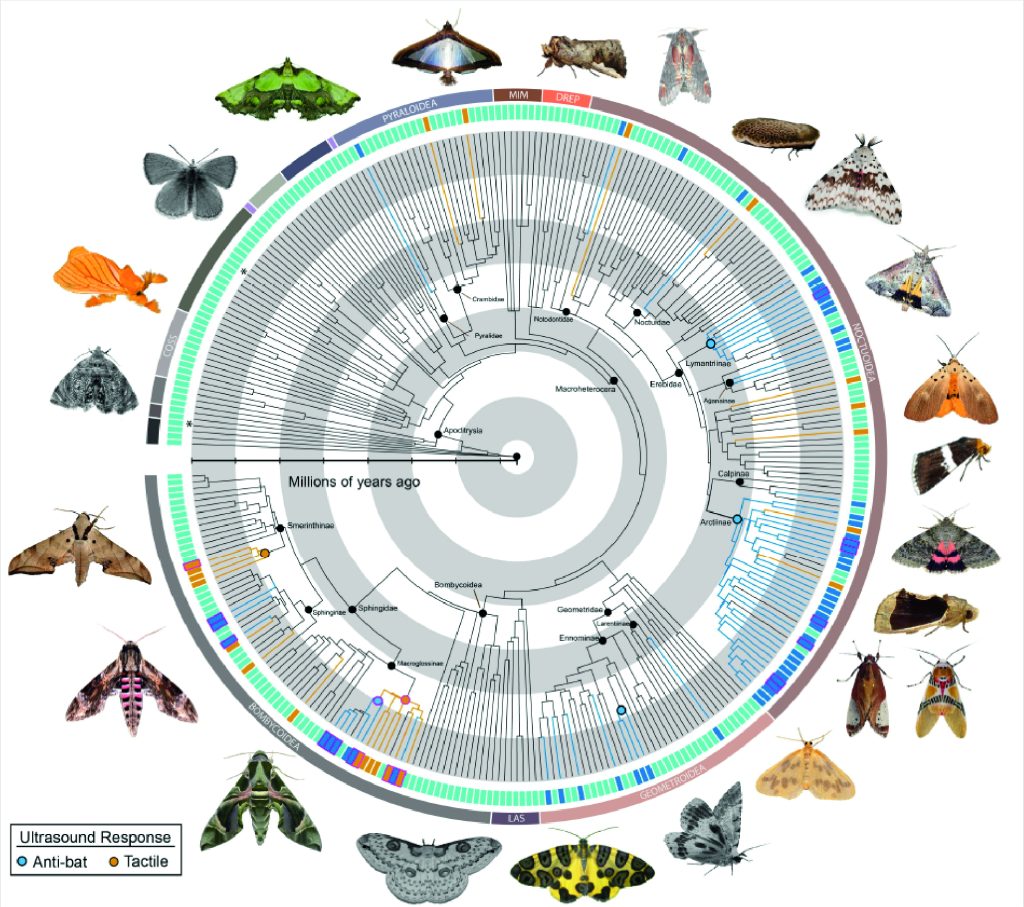 This is a multi-year study which involved numerous trips to locations to sample the local moths and assess their ability to produce ultrasound. The researchers embarked on field work in South America (Ecuador, French Guiana), Africa (Mozambique), and Asia (Malaysian Borneo). To assess whether moths produce ultrasound in response to a bat attack, the researchers simulated bat predation in two ways. The first simulated capture, whereby the researcher stimulated the moths with tactile handling to imitate the sensation of being captured by a bat. The second was an acoustic test, with the researchers hitting the moth with bat-like ultrasound to simulate the sounds of an approaching echolocating bat. Finally, the researchers conducted experiments on the palatability of the moth, allowing them to gain an understanding of whether the moth might be warning a bat of its toxicity or not. They did this by feeding moths to captive bats and assessing whether the bat would eat the moth or not.

Many species of moths produce ultrasound for reasons such as communication among other moths, attracting mates or to jam the sonar of an attacking bat predator. Here, the researchers show that most moths use ultrasound to communicate with their bat predators, advertising their toxicity. The researchers found that the majority of the moths that produce ultrasound were indeed toxic, suggesting that ultrasound production has evolved as a means of aposematism: that is, the moths are signally distastefulness to the bats, warning them not to eat them. Several other moths have also converged on this acoustic signal, yet are not toxic, indicating that these moths are faking to the bats that they are toxic, despite being perfectly edible, in an evolutionary process known as Batesian mimicry.

In addition to identifying many new ultrasound producing moths, the researchers also identified three new mechanisms of ultrasound production. They discovered that one species of moth will produce sound by scraping modified scales on their abdomen together, another uses its wings to beat against a modified structure near the joint of the wing, and a third species uses tymbals backed by horn like structures to beam ultrasound rearward during flight.

The acoustic battle between bats and moths is possibly the best example of a predator prey arms race in the animal kingdom, with instances of adaptations and counter adaptions on both sides. This study reveals just how little we still know about some of these fascinating evolutionary adaptions and reveals an entire world of ultrasound producing moths that were previously assumed to be silent. Aposematism is usually linked with strong colours and odours in many animal taxa and has been associated with mimicry, an effective anti-predatory strategy against visual predators. However, the existence of aposematism and mimicry based anti-predatory defences in the light-limited nocturnal environment is not well known, especially considering the other sensory modalities used by nocturnal animals. The authors of the study have explored this complex anti-predatory mechanism in the bat-moth acoustic system. By doing so, they not only describe the presence of aposematism in the acoustic world but have opened up interesting avenues in the field of predator-prey sensory ecology. This study should motivate sensory ecologists to undertake similar works to validate previous assumptions about predator prey interactions and work towards a better understanding of their evolutionary origins across different sensory modalities.

With moth defences being even more prevalent than previously thought, do you think there are more bat counter adaptations that we have yet to identify?

Likely! It does seem that the strength of selective pressure in this battle is tilted towards the prey thus I do not expect the adaptations to be balanced between bats and moths. Yet, I do agree that we have many interesting bat strategies to discover.

We played back sonar attack sequences from FM bats in the new world (two exemplars) and also used a synthetic FM attack that was modeled off many broadband FM bat echolocation attacks including Kerivola, an Old World FM bat. We also played two exemplars of a CF bat attack. Interestingly, moths around the world responded similarly to all these attacks! We know that most moths are “tone-deaf” and cannot resolve frequency, thus perhaps, this result is not surprising.

Do bats consume non toxic parts of an aposematic moth that could be identified in their excreta?

This is a possibility, but in general I think, for strongly defended moths, it takes few interactions for a bat to learn to avoid the acoustic warning, and thus these animals are unlikely to be found in excreta. For moths that are more palatable, but still noxious, hungry bats may indeed eat a few. I saw this behavior during my PhD with red bats and tiger moths.

How toxic are the unpalatable moths to bats? Can inexperienced bats still survive after feeding on a toxic moth?

Palatability in moths is a spectrum as has been shown in other aposematic systems. Many moths are incredibly noxious to bats; I have never seen a bat take more than a taste of these animals!