From Armament to Ornament: Performance Trade-Offs in the Sexual Weaponry of Neotropical Electric Fishes

Some electric fishes fence with long jaws for mates! They sacrifice bite force for a longer jaw, which makes a better weapon. 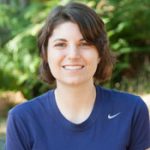 Background: Most of the work on electric fishes has focused on their namesake: the ability to produce electricity. There have been countless studies on their electric organs, communication using electricity, and the role of electricity in navigation and prey capture. However, these fish are more than just their electric organs. They also engage in complex behaviors unrelated to electricity. One such behavior is battling over mates using weapons built in to their faces.

Kory Evans and colleagues discuss the potential consequences of having weaponry used in male contests over mates. They use two species of electric fishes, Apteronotus rostratus and Compsaraia samueli, with elongated jaws as their study system; they are sexually dimorphic, and the elongation of the jaw varies between individuals.

What they did: The researchers took micro-CT scans and created 3D computer models of each individual. They then quantified skull variation using three-dimensional geometric morphometrics. This technique uses anatomical landmarks placed on the 3D models to analyze differences in shape between subsets of a group. Finally, they calculated mechanical advantage of the jaw. Mechanical advantage is an estimate of the force produced by different systems. In this case, the researchers used the relationship between the length of the adductor mandubulae muscle (closes the jaw), and the length of the jaw itself as a proxy for bite force [1]. 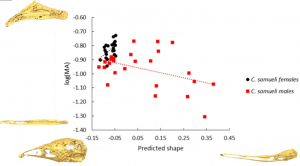 Open questions and possible future studies: It would be interesting to take the study further by measuring the kinematics of the fish during a contest. 3D printed physical models based on the CT scans could also be tested to provide more concrete evidence of mechanical advantage.