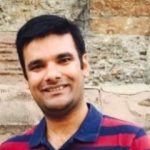 CRISPR-Cas is a prokaryotic defense system that provides its host with adaptive immunity against invading mobile genetic elements. In addition to protein-coding genes that function at different stages of the CRISPR-Cas pathway, the CRISPR locus contains an array of repeats flanked by variable sequences called spacers. These spacers serve as an immunological memory of past infections by encoding for a sequence corresponding to a genomic segment of the infecting element. During interference, the CRISPR effector complex is guided to cleave the target nucleic acid by a non-coding RNA (guide RNA) formed by a pair of repeat and spacer.

Several decades of research on these systems have uncovered multiple types of CRISPR-Cas systems (Type I-VI) that vary in their composition and mechanism [1]. In 2017, Peters et al bioinformatically identified ~400 instances that includes a single ancestral association between the type I-F CRISPR-Cas system and a bacterial transposon, related to a specialized element called Tn7 [2]. In addition to association with type I-F, now categorized as type I-F3, two evolutionarily independent associations of Tn7 with type I-B and V-K CRISPR-Cas systems have been identified [2,3]. These Tn7 associated CRISPR-Cas systems are unique in that they lack the integrases (Cas1 and Cas2) that are involved in acquisition of new spacers. Additionally, type I-F3 also lacks the Cas3 endonuclease activity that is responsible for target DNA degradation [2].

Tn7 is a cut-and-paste DNA transposon that can undergo transposition into random integration sites in a sequence-independent manner, while specifically targeting mobile plasmids (TnsABC +E dependent pathway) or can site-specifically integrate at sites proximal to conserved protein coding genes (TniQ/TnsD dependent pathway). Typically, integration of Tn7 elements into unique sites in the TniQ/TnsD-dependent pathway is thought to be driven by the evolution of the targeting specificity of TnsD/TniQ DNA binding proteins. However, with the discovery of CRISPR-associated Tn7 systems, it was speculated that the site-specific integration of these systems might be achieved through the guide RNA encoded within the CRISPR-Cas system. Last year, Klompe et al tested this hypothesis by reconstituting the Vibrio cholerae encoded Tn6677 system in Escherichia coli and demonstrated that the transposon system can be targeted to unique sites based on the guide RNA sequence [4]. Although this suggested that the Tn7-like transposon has repurposed the CRISPR-Cas system to integrate site-specifically in a guide RNA dependent manner, no target sequences corresponding to the I-F3 spacers were previously identified around the integration sites. In this preprint, Petassi et al not only provide evidence for guide RNA driven integration of type I-F3 CRISPR system, but also reveal several interesting features of these systems.

Through data mining of ~53000 genomes, the authors identified ~801 Tn7-like elements containing the type I-F3 CRISPR-Cas variant that can further be classified into type I-F3a and IF3b. Strikingly, for every integration event the authors were able to identify the complementary target sequences corresponding to one of the spacers from the array. Several interesting observations were made about these interactions: (1) the spacer interaction almost always occurred ~48bp away from the right end of the transposon. (2) the transposition-associated spacer (taSpacer) always appeared to be the last spacer in the array. In type I-F3a the taSpacer with its flanking repeats occurred after a 70-90 bp gap in the array, while for I-F3b, the array appeared to be contiguous (Fig. 1A). (3) In contrast to typical repeats that are nearly identical to each other, the repeat flanking the taSpacer (atypical repeat) showed significant sequence divergence compared to the other repeats in the array.

How might type I-F3a be preventing autoimmunity? Spacers targeting the host’s own chromosome is not unique to the Tn7 CRISPR systems. Several genomes have been identified that encode such self-targeting spacers [4]. In fact, the self-targeting property of some of these genomes have been used as clues to identify mechanisms to control CRISPR activity. Many Anti-CRISPR proteins that directly counteract CRISPR-Cas interference machinery have been discovered in these self-targeting genomes [5]. Although the Authors did not find any of the known Anti-CRISPRs to be conserved and widespread in the type I-F3 genomes, these genomes might encode novel Anti-CRISPRs.

In addition to guide RNAs being specialized for transposition at least for type I-F3b, both classes of Tn7 CRISPR-Cas systems are transcriptionally controlled by the transcription factor, XRE. For type I-F3a, the XRE directly interacts with the promoter upstream of the array containing the spacer involved in transposition. While for type I-F3b, XRE interacts with the promoter upstream of Cas genes (Fig. 1C). It is possible that for type I-F3a, the XRE represses expression of the array required for transposition to mitigate autoimmunity. Alternatively, consistent with the observation that XRE represses expression of the Cas operon in type I-F3b, it also may be that the Tn7 CRISPR-Cas systems are under self-regulation to limit the time window of transposition. 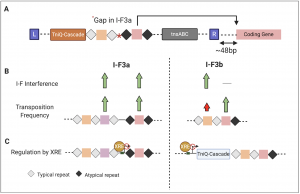 Fig 1. Summary of some of the key findings highlighting the differences between type I-F3a and b Tn7 CRISPR-Cas systems. (A) Schematic showing the locus structure of Tn7-CRISPR-Cas system depicting its integration proximal to a conserved gene with the spacer interaction site highlighted by the arrow. (B) For type I-F3a, the spacers flanked by typical or atypical repeats are equally efficient for transposition and are also capable of being used for interference by canonical type I-F CRISPR-Cas system. In case of type I-F3b, spacers flanked by atypical repeats are specialized for guiding transposition and cannot be utilized by type I-F CRISPR-Cas system for interference. (C) XRE represses transcription of both type I-F3a and I-F3b locus but vary in the site of interaction.

Is this tolerance for mismatches also spacer sequence specific? Would increasing the number of mismatches abolish transposition? What is the threshold?

How many other sequences complementary to the transposition-associated spacer (taSpacer) can be identified in the genome (Allowing 10 mismatches)? If multiple possible interaction sites exist, could it mean additional factors might be involved in integration site specificity?