Cellular subclasses have long been studied in order to identify specific features that can be targeted for a wide range of research purposes. Gene expression profiles are a hallmark of cell identity and subpopulations of cells inside a tissue show unique signatures at the transcriptional and protein levels due, in part, to the differential activity of regulatory elements that control gene expression, such as promoters or enhancers.

Driver lines are often used in mouse genetics to label cell populations, although many of these drivers label different cell types in the organism. In this work, Lucas T. Graybuck et al. identified the enhancer repertoire of neuron subclasses based on single-cell (sc) RNA-seq and scATAC-seq. Adeno-Associated Virus (AAV) vectors capable of infecting the Central Nervous System (CNS) combined with specific enhancer elements effectively drove the expression of the transgene in one out of the three neuron subclasses located at the layer 5 (L5) of the visual cortex of the brain, improving specificity of existing mouse driver lines.

Once the authors identified candidate regulatory elements for the neuron subclasses, they cloned their sequences into Adeno-Associated Virus (AAV) vectors and combined enhancer specificity with AAV tropism to effectively target the cells of interest. They took advantage of the AAV-PHP-eB engineered serotype that is able to cross the blood-brain barrier and infect the central nervous system (CNS) after intravenous injection [1, 2]. Viruses containing a fluorescent reporter controlled by a minimal promoter together with the enhancer of interest were tested. In the case of the putative regulatory element 4 (mscRE4) controlling the Fam84b gene, they achieved >91% targeting of pyramidal L5 excitatory neurons (L5-PT), without labeling intertelencephalic neurons (IT) from the same layer of visual cortex (Fig. 1). 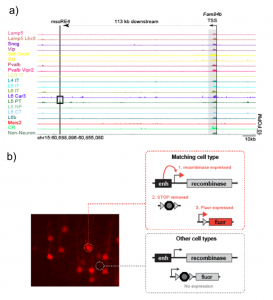 Figure 1. mscRE4 enhancer in the Fam84b locus is specific of L5-PT neurons (a) (image taken from figure 2e) and its use to control recombinase gene expression in combination with AAV vectors (b) (taken from figure 1) resulted in resolved cell subclasses.

To expand the use of AAV-mediated enhancer-driven gene expression and solve the limitations of the available mouse lines, they applied this strategy to express recombinases in the neurons of interest. Co-administration of viruses carrying different enhancer-recombinase pairsincreased the versatility of the tool and enabled simultaneous labelling of cell populations without the need for multiple crosses between lines.

Distinguishing and characterizing cell types is not only essential to elucidate the role they are playing in a fully developed organ, but also to understand how an organism develops from a single cell. Specific labelling of cell populations allows for their isolation to study particular features such as their transcriptomic profile or other genomic properties like chromatin accessibility, histone marks or transcription factor binding. Fluorescently labelled populations can also be tracked down during embryo development to better understand the contribution and the dynamics of the different progenitors and visualize the formation of complex structures such as the nervous system or the heart. For this, again, we depend on already available recombinase-based driver lines that might not label our tissue of interest or have a spread effect that would turn the analysis rather difficult.

I chose this preprint for its elegant experimental design based on single-cell characterization of brain subpopulations which enabled the identification of specific enhancers that can be used to target and/or label cells with higher precision. This work will be of interest not only to neurobiologists who will find a useful resource of brain genomics, but for many developmental biologists who will also find a powerful strategy to increase the resolution of lineage tracing.

AAVs are being widely assayed in clinical trials for their presumably undetectable immune response and delivery potential. Surface markers, such as receptors or epitopes, provide a collection of gates through which exogenous DNA can be introduced into the desired cell by means of different delivery systems, as in the case of viral vectors. To meet sensitivity and specificity, which are crucial for successful practice, identifying surface markers that are present in the population of interest is as important as their absence in others that should be kept non-transduced. However, it is not always possible to meet these requirements and target exclusively the tissue under study due to shared features between cell types and limitations in the delivery system. The strategy followed by Lucas T. Graybuck and collaborators, combining AAV tropism and enhancer specificity could also be of great interest in the field of gene therapy to reduce off-target effects.