The presence of foreign nucleic acids within a cell is a universal signal of pathogen invasion and the target for a wide range of immunity systems, ranging from restriction enzymes and CRISPR systems in bacteria to a coordinated array of cell-intrinsic and -extrinsic responses in mammals. Following detection of nucleic acids, typically derived from an infecting virus, by a range of dedicated pattern recognition receptors (PRRs), mammals initiate a cascade of signaling through the type I interferons to alert neighboring cells and induce a widespread anti-viral state. At the same time, infected cells induce cell-intrinsic defenses to limit viral replication and spread. One canonical response is the activation of protein kinase R (PKR) and RNase L to shut down cellular translation, preventing viral gene translation and subsequent viral particle production. However, it has been a mystery how the global shutdown of cellular translation and the requirement to continue to produce anti-viral proteins and type I interferons. This paper presents an elegant explanation solving this long-standing mystery in anti-viral responses.

In the course of their microscopy experiments, the authors note that there is substantial heterogeneity between cells in their anti-viral response. For example, not all cells that induce RNase L activation produce IFN-b, and vice versa. The same is true for stress granule formation in RNase L knockout cells, as there is no strict connection between stress granule formation and IFN-b production.

This preprint provides strong evidence for a model whereby RNase L activation, during an anti-viral response, leads to remodeling of the cellular transcriptome and translational control through escape from mRNA degradation of anti-viral mRNAs (see Figure 7, reproduced from the preprint below). This allows cells to accomplish the conflicting goals of restricting viral translation and initiating apoptosis while simultaneously producing anti-viral factors for cell-intrinsic defense as well as cell-cell communication. A long-standing mystery in anti-viral immunity is being resolved! 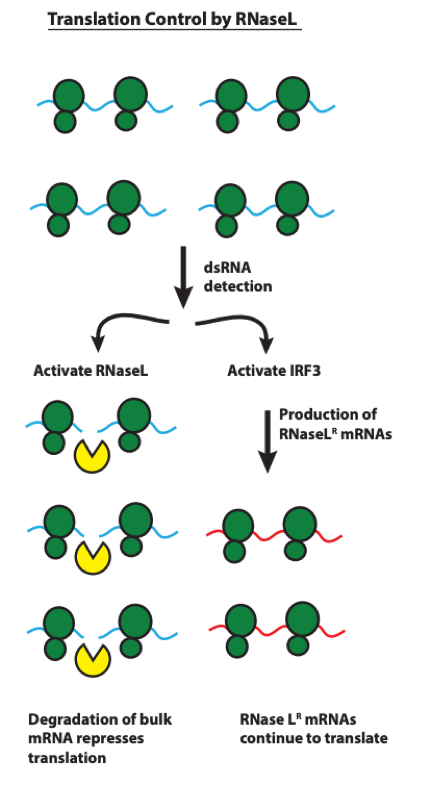