Melanoma is the deadliest form of skin cancer. There is extreme genetic and cellular heterogeneity within each tumour as well as between patients. This, coupled with the ability of melanoma cells to switch between proliferative and invasive/drug resistant phenotypes means that identifying common cell states to target therapeutically is difficult. Despite this, two cell states have been found previously that recur across tumours and patients. One is the melanocyte-like state – marked by SOX10 and associated gene expression that controls the developmental melanocyte lineage program, and the other is the mesenchymal-like state – marked by SOX9 expression and associated with invasiveness and resistance to therapy.

First, the team performed scRNA-seq on nine patient-derived 2D melanoma cultures (MM lines), as well as the A375 melanoma cell line. Each sample clustered together after dimensionality reduction, however there were also gene signatures in common across MM lines, chiefly the SOX10-high melanocyte-like state, and the SOX9-high mesenchymal-like state. Interestingly, some melanocyte-like MM lines also expressed mesenchymal- and immune-associated genes, representing an intermediate state. This can be visualised in the tSNE plot below: 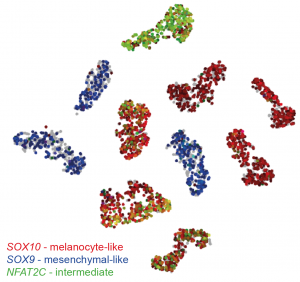 t-SNE plot of sc-RNA seq data generated using the online tool made by the authors (http://scope.aertslab.org/#/Wouters_Human_Melanoma). Each cell line forms its own cluster, however there are gene signatures in common. The SOX9 mesenchymal signature is restricted to three cell lines (blue). The other lines express SOX10, marking a melanotic phenotype (red). A subset of melanotic cell lines also express mesenchymal markers, as well as genes such as NFAT2C (green) which define a novel intermediate phenotype.

Trying to identify clusters, common factors and tease patterns out of noisy-by-nature datasets can be quite a headache, so it is very interesting to see characterisation of common melanoma transcriptional signatures in what initially looks like very diverse samples. The authors have also made their scRNA analyses available at http://scope.aertslab.org/#/Wouters_Human_Melanoma, and it’s been fun to look at how my own genes of interest are expressed in the different cell lines. It will be interesting to see how targeting the intermediate cell state markers could change melanoma behaviour in a therapeutic context in terms of invasiveness and drug resistance.

Do you know if SOX9 knockdown or SOX10 overexpression in mesenchymal-like states would cause reprogramming towards a melanocyte-like state, and could this increase its drug sensitivity? Or are mesenchymal-like cells, or indeed melanotic cells towards the extremes of melanocyte-state more refractory to phenotype switching than intermediate-state cells?

Do you know if the established MM cell lines you used retain the degree of cellular and transcriptional heterogeneity that would be found if you were to obtain tumour cells directly from patients and compare these? Might the signatures you find be more enhanced by long term culturing in the same conditions?

How do you envision how the identification of these different states could help stratify treatments for patients, who might have different tumours at various places along the SOX10-melanotic/SOX9-mesenchymal spectrum?