Minerva instructs Drosophila embryonic macrophages to push the boundaries of tissue invasion by initiating a developmentally-controlled program of glycosylation.

Post-translational modifications (PTMs) are covalent modifications of proteins that occur after synthesis and folding and are used by cells to diversify and fine-tune protein activity. As such, PTMs regulate a broad range of events including protein subcellular localization, protein-protein interaction, enzymatic activity, signal transduction and protein degradation. Therefore, it is not surprising that uncontrolled changes in the levels and/or repertoire of PTMs can result in a deregulation of cellular functions which ultimately contributes to aging and diseases.

Glycosylation (i.e. the addition of sugar to the oxygen (O) or nitrogen (N) of amino acid residues) is one of the most abundant post-translational modifications. O-glycosylation is a multi-step process which can result in the generation of truncated O-glycans known as Tn and T-antigens. While at the embryonic stage T and Tn modifications are transient and mostly lost in adults, their de-novo synthesis is often switched back on in cancer cells which therefore display high levels of T and Tn-antigens on their surface. T and Tn-antigens are indeed counted as tumour biomarkers and their presence often correlates with poor prognosis and the appearance of metastatic lesions.

As T and Tn antigens are mostly absent in adult tissues and transiently appear during embryonic development, it is reasonable to draw the conclusion that the appearance of these structures in cancer cells might arise from the reactivation of an embryonic molecular program. Understanding the basis of how O-glycosylation is modulated and controlled during development could therefore crucial to gain a better understanding of cancer biology and to potentially identify new therapeutic targets.

Drosophila macrophages (also known as hemocytes) originate in the head mesoderm and from their site of origin they actively migrate to disseminate throughout the embryo (Fig. 1). During their dissemination, these cells mostly undertake non-invasive routes, such as along the developing ventral nerve cord. However, at the earlier stages of their developmentally controlled migration, these cells breach the epithelial barrier and invade the juxtaposed ectoderm (germband) before its anterior-to-posterior retraction starts (Fig.1 A). For this characteristic migratory behavior, that closely resembles the one of metastatic cells, Drosophila hemocytes offer the unique possibility to verify whether O-glycosylation contributes to tissue invasion and cell dissemination in vivo during embryonic development.

A screening of FITC-labelled lectins showed that glycan structures are present on the surface of invading hemocytes.  As proof of principle, downregulation of the core T-synthase C1GalTA (which results in a reduction of T-antigen levels) causes an increase in macrophages which sit in the yolk and are unable to invade the germband. Therefore, T O-glycans indeed facilitate germband infiltration (Fig.1 C). What players contribute to an increase in T O-glycans? Given that neither the T-synthase or the sugar transporter Ugalt are transcriptionally upregulated at stage 12, the authors ran an in silico analysis for potential sugar binding protein expressed in macrophages at the time of the increased O-glycosylation and identified CG8602 as a gene codifying for a Major Facilitator superfamily (MFS) protein with predicted functions of sugar transporter. The authors named this protein Minerva.

minerva is upregulated in macrophages at stage 10-12 of development (12-fold increase in hemocytes at stage 12 compared to the rest of the embryo) and its mutation caused a reduction in the T-antigen levels on macrophages at the same developmental stage. Minerva co-localises with the Golgi markers Golgin 84 and with the endosome markers Rab7, Rab11 and Hrs. Most importantly, minerva mutants showed germband invasion defects comparable to the ones cause by C1GalTA RNAi. Analysis of macrophage migratory ability revealed that minerva mutant macrophages moved at slower speed from their initial position to the germband,paused longer to gain entry into the tissue and also, once they infiltrate the ectoderm, they moved slower within the germband. Importantly, hemocyte migration along the ventral nerve cord is not perturbed, arguing against the possibility that the phenotypes observed were due to general defects in developmental dispersal.

To identify what proteins are targeted for glycosylation in a Minerva-dependent manner, lectin-enriched O-glycoproteomics was performed in stage 11-12 wild type versus minerva mutant. Analysis of wild type embryos led to the identification of 270 glycoproteins and revealed that O-glycosylation on Threonine is the most abundant form. O-glycosylated proteins fall in the GO term categories of metabolism, cuticle development and receptors. The O-glycoproteome of minerva mutants mostly overlapped with the wild type one with only a small subset of proteins (63 proteins, 23%) showing a 3-fold change and 18 proteins (6%) a ten-fold change. Of these 18 proteins with lower levels of T antigen, several have been previously linked to invasion in vertebrate models. Specifically, they identify the sulfhydryl oxidase Qsox1, Dtg and Put which relate to BMP-signalling, Dpp and Gp150 which modulates Notch signaling.

Can the characterization of Minerva be informative to vertebrate models? In other words, is Minerva activity conserved from flies to vertebrate? Sequence alignment revealed that the murine MFSD1 shares high sequence similarities with Minerva with 68% of amino acids conservation. MFSD1 shows the same localization patter in cells, colocalizing with markers for the Golgi. Most importantly, overexpression of MFSD1 in minerva mutant macrophages rescues O-glycosylation levels and the germband infiltration defects described, suggesting that the ability of Minerva to support tissue invasion is conserved up to mammals. 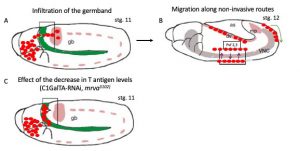 Figure 1: Schematic representation of the development routes Drosophilahemocytes follow to disperse throughout the embryo. A) Drosophilahemocytes (in red) originate in the head mesoderm and they populate the entire embryo by moving along 3 main routes. In the first route, hemocytes move over the yolk (in green) towards the germband (gb) and invade the epithelium. B) hemocytes then move along the developing ventral nerve cord (VNC) and through the dorso-ventral channels that run across it (purple arrows) engulfing and digesting apoptotic corpse and helping to shape the VNC. C) Reduction in the levels of O-glycosylation specifically in hemocytes alter their ability to infiltrate the germband causing an abnormal accumulation of cells sitting on the yolk.

Original picture was adapted from(Evans and Wood 2014). In the picture, dorsal is at the top and anterior to the left.

The work reported in this preprint contributes to the field of O-glycosylation providing two advances:

The observation that this conserved protein regulates cell invasion through glycosylation offers a unique opportunity to investigate how cells use this PTM to bypass tissue barriers and penetrate into tissues, with important implications for cancer biology. Altered glycosylation is in fact an old dogma in cancer biology and often high levels of GalNAc-transferases have been linked to poor patient prognosis.

1)  Yes, absolutely we would like to integrate this exciting new model into our inquiries.  We have preliminary data supporting the conclusion that the genetic requirements for hemocyte extravasation from pupal veins show overlap with what is required for hemocyte germ band invasion and would like to see if glycosylation also alters extravasation.
2) In the Minerva mutant we see reduced levels of Tn on a predicted cysteine-type endopeptidase whose human ortholog CTS8 has roles in metastasis and invasion and increased levels of T antigen on several cysteine-type endopeptidases.  While we see changes on receptors we have not seen any change on a protein already known to have a role in adhesion.
(See Table 2).
Comment:
I’m excited by the fact that this one protein can lead to a concurrent set of glycosylation changes on a subset of proteins that affect invasion.  It supports the idea that it is an important regulatory node point for triggering a particular cellular behavior, and thus begs the question of how Minerva activity could be modulated.  I’m wondering if localization into or out of the Golgi could alter its function along with transcriptional control.  I  am also curious how Minerva’s specificity for this group of proteins is encoded biochemically.  Our current data doesn’t support the idea that it is a transporter, and we are trying to determine if it directly binds the proteins it regulates or binds one of the GalNac transferases.
We are also very interested in understanding how the Minerva ortholog, MFSD1, could affect the behavior of cancer cells and if the targets we find in the fly, such as Qsox1, are also regulated by MFSD1.