To take the yeast by the horns: researchers describe the antifungal effects of a novel inhaled triazole on Candida albicans-infected immunocompromised mice

Candida yeasts are commensal organisms that are often considered as part of the host microbiota. However, they can cause invasive candidiasis in immunocompromised patients, and recent research further suggests that they are also associated with worse clinical outcomes when involved in other respiratory diseases [1-12].

Current antifungal therapy largely revolves around the use of triazoles such as itraconazole, voriconazole, and posaconazole. Unfortunately, clinical antifungal therapy is currently complicated by a few factors: (1) toxicities associated with the antifungals [13,14]; (2) multiple complex drug interactions [15,16]; (3) pharmacokinetic considerations [17]; and (4) global resistance to antimicrobial agents [18]. To circumvent these difficulties, researchers (some of whom also authored this preprint by Nishimoto et al.) invented PC945 [19,20], an antifungal triazole that is designed with improved pharmacokinetics to deliver high local concentrations and for high cell retention (to lengthen its duration of action). In this preprint, Nishimoto et al. evaluated the possibility of administering PC945 intranasally, and assessed its in vitro antifungal effects against various Candida species by comparing it to the positive control voriconazole (Fig. 1). 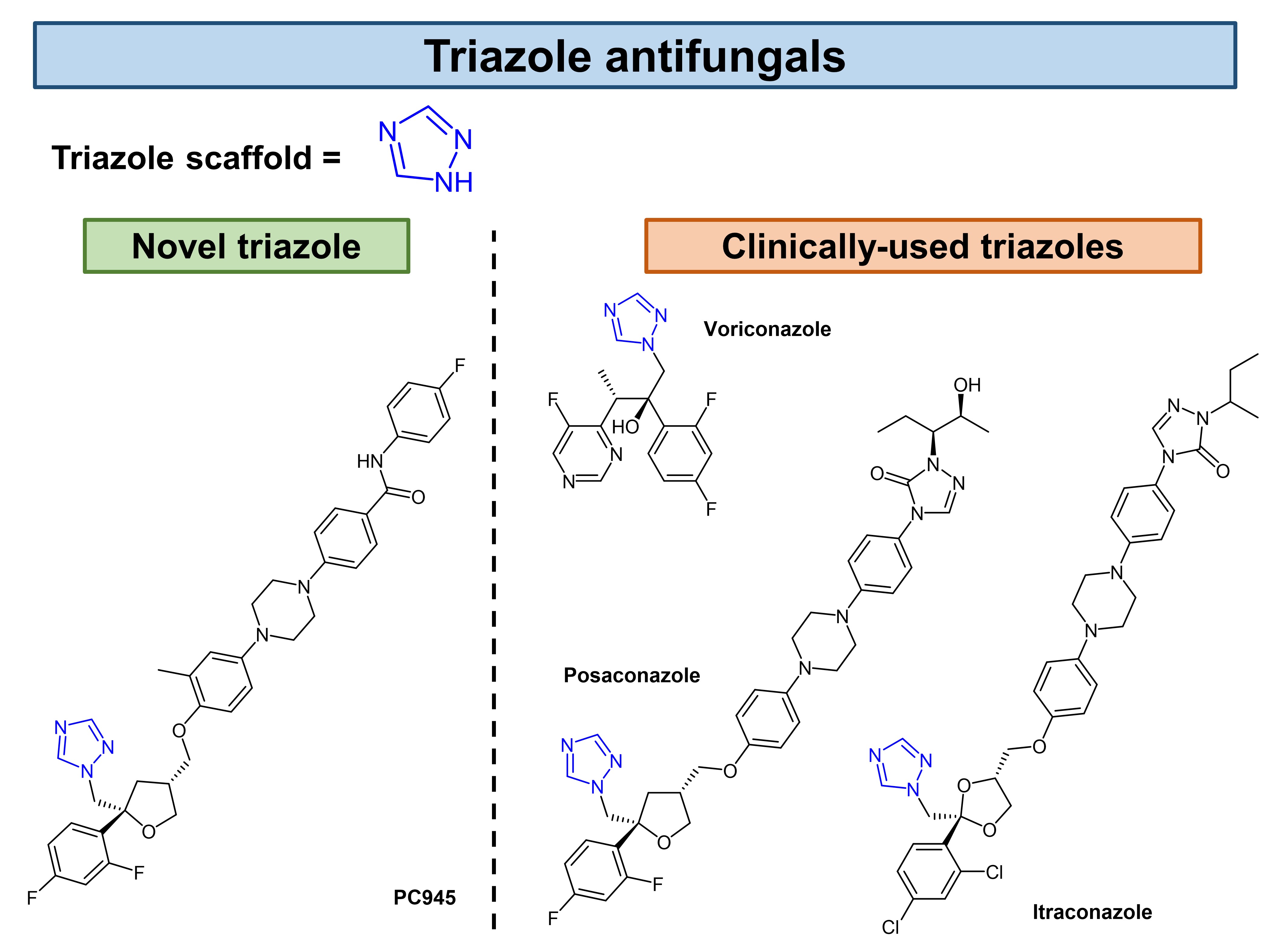 Figure 1. Common antifungals and those investigated by Nishimoto et al. in their preprint.

First, Nishimoto et al. established the survival and biomarkers yardsticks by which to evaluate PC945’s pharmacology. Through these preliminary experiments, the authors established the fungal load inoculum (2.5 x 106) and timeframe (5 days) for their study. They also assessed the in vitro potency of PC945 (0.016 µg/mL) and the positive control voriconazole (0.008 µg/mL).

Nishimoto et al. then administered intranasal doses of PC945 or voriconazole in saline suspension to immunocompromised and temporarily neutropaenic mice. They observed a significant, dose-dependent improvement in 5-day survival, fungal burden, and the inflammatory marker CXCL1, but not a significant reduction in TNFα (Table 1). The authors compared these results to another experiment which assessed the efficacy of extended prophylaxis with PC945: prophylaxis was 25-fold more effective than therapeutic treatment in terms of reducing fungal load, and significantly reduced TNFα as well. 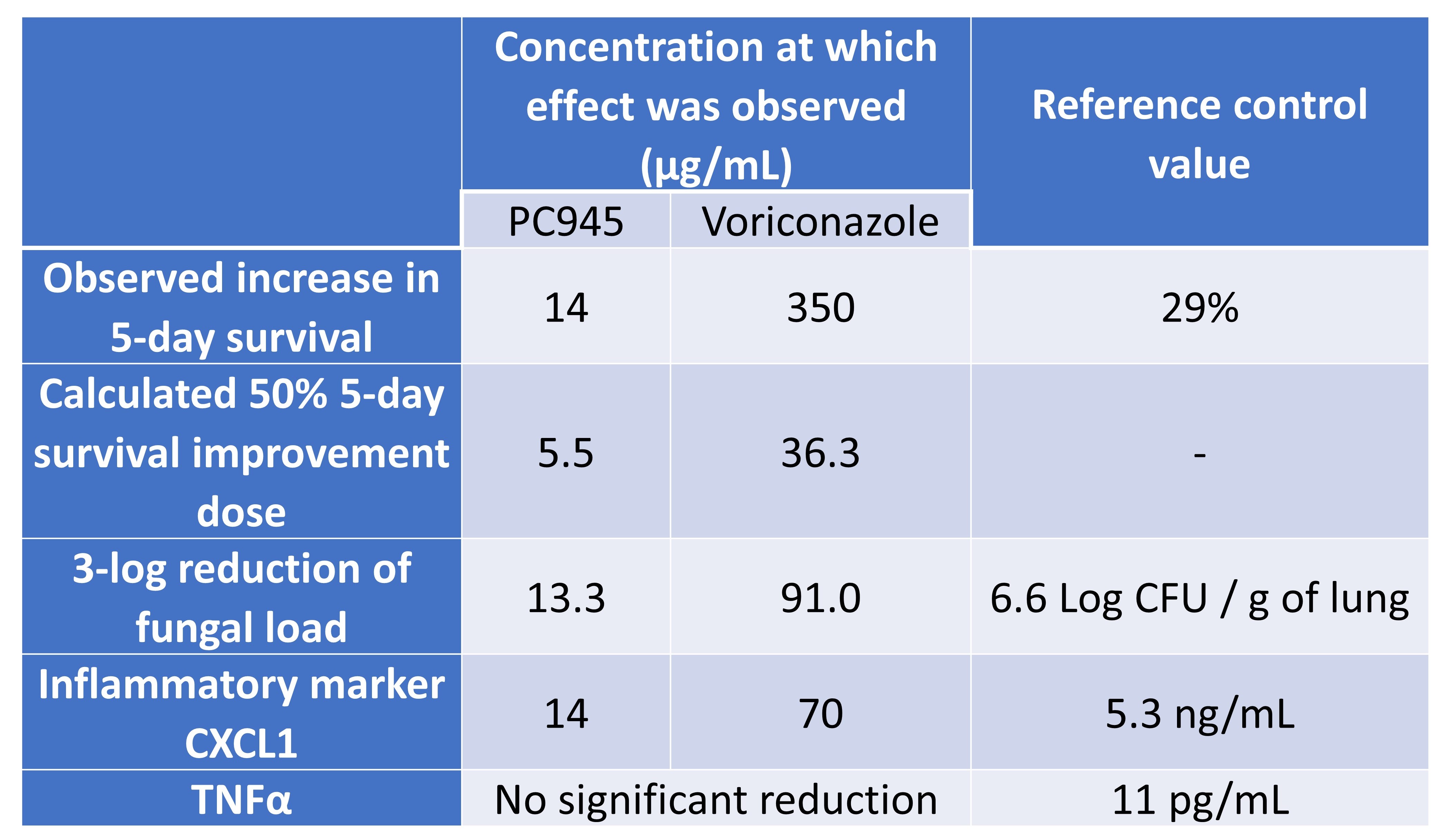 The key questions that remain largely revolve around the factors that account for the vast differences in activity between voriconazole and PC945 (Table 1). Can they be ascribed to the differences in pharmacodynamics, or to the improved pharmacokinetics of PC945? Indeed, in their preprint, Nishimoto et al. highlight the need for further studies to identify the mechanisms involved.

Two main directions lead the way forward. First, further characterisation into the mechanisms underlying PC945’s antifungal activity will allow scientists to better understand its potency, efficacy, toxicity, and selectivity; all these factors are considerations that influence its clinical utility. Second, PC945 may also be investigated for its activity against other fungus species as well, especially those implicated in infectious diseases. In their 2017 paper [19], the authors had found PC945 to be active against Aspergillus, Candida, and Cryptococcus species. Future developments of PC945 may therefore revolve around this line of research.

There is also one other aspect of this research to look forward to. The phase I clinical trial of PC945 was completed in 2018, and the manuscript is in preparation. Nishimoto et al. have suggested in their preprint that the local administration of PC945 largely retains it in the exposed organ—in this case, the lung—with low systemic exposure. Might this pharmacokinetic finding enable clinicians to achieve selectivity through the appropriate route of administration? The pharmacokinetic (PK)-pharmacodynamic (PD) relationship makes for a complex but integral consideration in antimicrobials, so this will be something worth watching.