No use resisting: reversing antibiotic resistance using combinations of antibiotics and anti-virulence compounds

ESKAPE—Enterococcus faecium, Staphylococcus aureus, Klebsiella pneumoniae, Acinetobacter baumannii, Pseudomonas aeruginosa, and Enterobacter—is a group of six pathogens exhibiting multidrug resistance and virulence that was first described in 2008 [1]. Today, these six pathogens continue to present a major concern to the World Health Organisation (WHO), which has characterised them as “pathogens for which antibiotics are urgently needed” [2,3]. Specifically, carbapenem-resistant P. aeruginosa has been listed in a high priority group [2], testament to the increasing urgency with which this problem must be resolved.

In their preprint, Rezzoagli et al. focus on P. aeruginosa for its clinical relevance and its position as a model organism for anti-virulence research. The authors investigate two major anti-virulence mechanisms: quorum sensing and siderophore-mediated iron-uptake systems, using furanone c-30 and gallium respectively (Fig. 1A). These compounds were investigated in combination with existing antibiotics (Fig. 1B) used to treat P. aeruginosa in four major steps (Fig. 2). 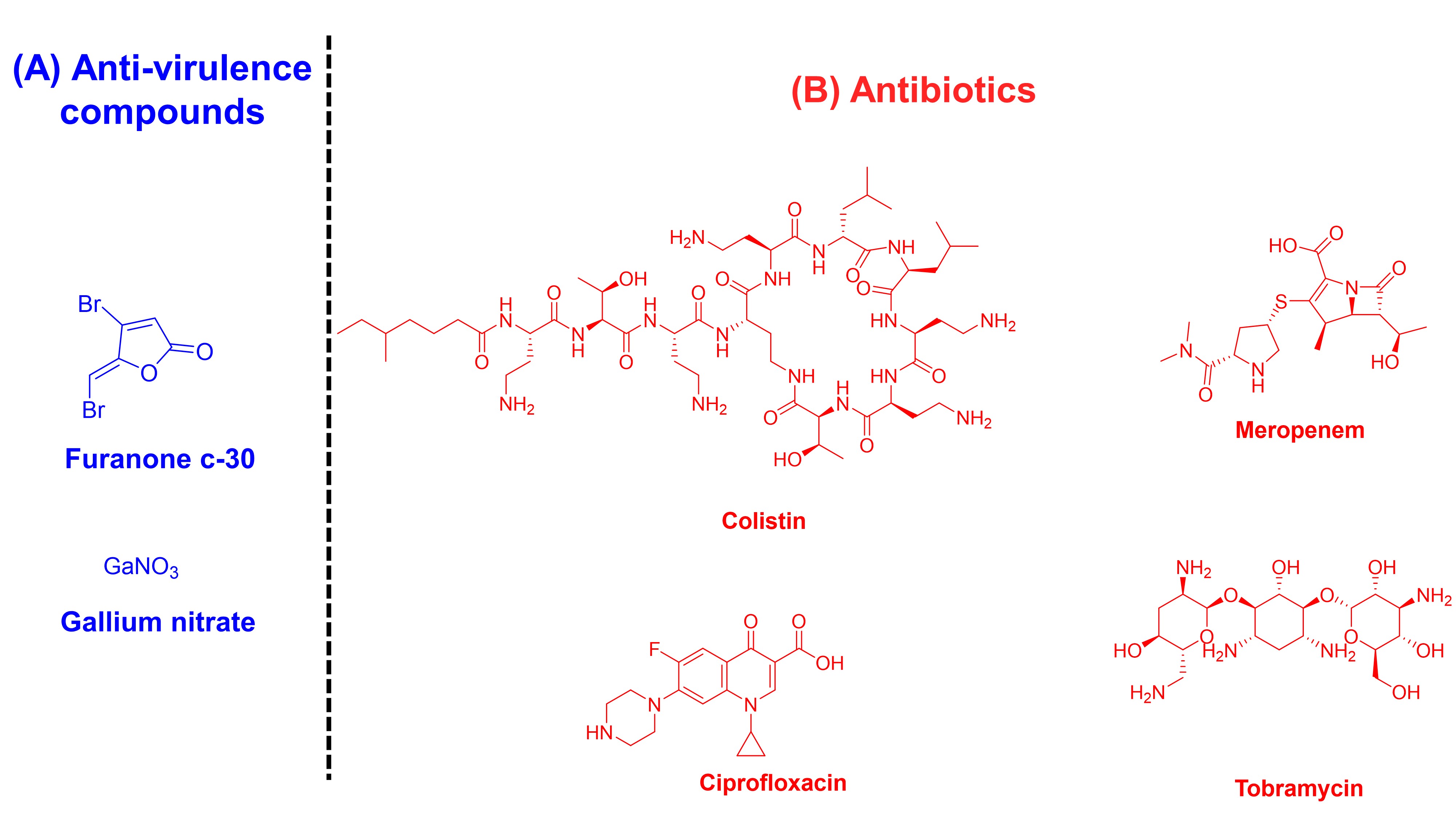 Fig. 1. Structures of compounds investigated in this preprint, categorised into their respective mechanisms of action. (A) Anti-virulence compounds: furanone c-30 and gallium nitrate. (B) Antibiotics: ciproflxacin, meropenem, colistin, and tobramycin. 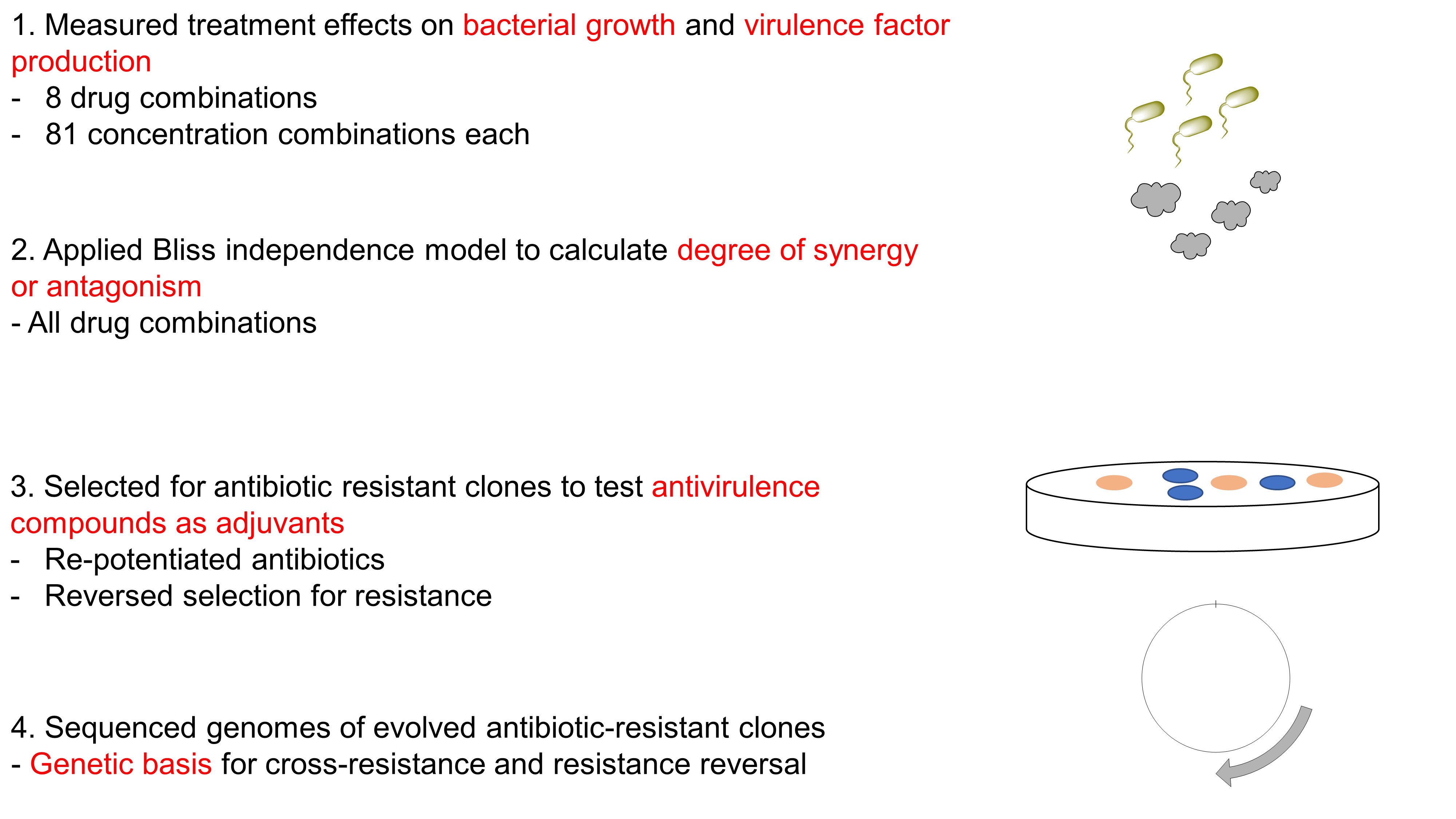 (A) Treatment effects on bacterial growth and virulence factor production

The authors determined that the dose-response curve to the four antibiotics and the two anti-virulence compounds were sigmoidal (preprint Figure 1). The antibiotic concentrations could be classified into three ranges (Table 1).

Rezzoagli et al. investigated different gallium- and furanone c-30-antibiotic combinations (Table 2, Table 3), and examined whether the degrees of synergy correlated between growth and virulence factor inhibition (Table 4). Based on their observations, the authors concluded that specific drug combinations cannot be classified as either synergistic or antagonistic; rather, they emphasise the importance of separately characterising these interactions stratified by concentration, with the strongest effects observed at intermediate drug concentrations. 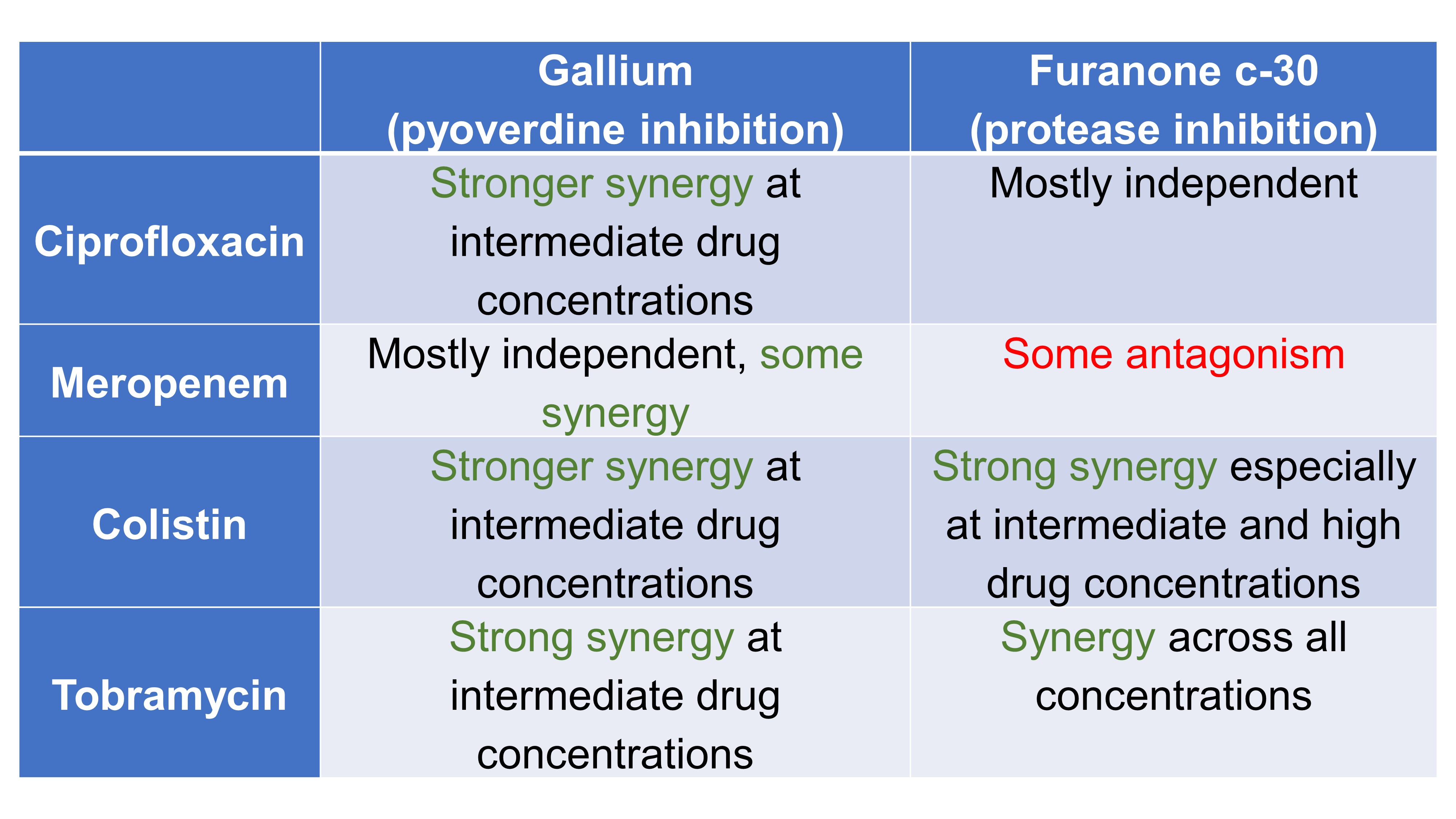 Table 4. Association among degrees of synergy between growth and virulence factor inhibition.

Finally, the authors conducted whole-genome sequencing on their antibiotic-resistant clones, finding single nucleotide polymorphisms (SNP) and insertion or deletion of bases (INDEL) that have been associated with resistance to the respective antibiotics (preprint Table 1).

As the threat of antimicrobial resistance looms, pharmaceutical researchers, healthcare professionals, and policymakers are scrambling to find ways to reduce our reliance on antibiotic use. Consequently, alternative strategies to tackle the problem are returning—researchers are beginning to explore the use of bacteriophages and anti-virulence compounds as alternatives to conventional antibiotics [4,5]. This preprint, in which Rezzoagli et al. utilise P. aeruginosa as a model organism in their investigation of the interaction between anti-virulence compounds and antibiotics, is thus a timely undertaking.

Rezzoagli et al. proposed three areas of further research in their preprint: to quantify the rate of resistance evolution under the combinatorial treatments, to test the combinations in relevant animal-host models, and to better characterise the combinations’ pharmacodynamics and pharmacokinetics. Indeed, the highly exploratory nature of this work means that anti-virulence compounds will need to be further evaluated before it can complete its journey to the clinic.

These three areas are intricately linked. The rate of resistance evolution in vitro and in vivo may not correlate, and investigations pertaining to this topic would depend on the animal-host model used. Pharmacokinetics vary across animals, so the animal-host model will have to be carefully selected for the pharmacokinetics—and therefore the pharmacodynamics—of these combinations to be representative of that in humans. In fact, this will be a particularly challenging but important undertaking, given the varying correlations between synergy and antagonism of the combinations on growth and virulence factor inhibition.

Many questions remain. How should the evolution of resistance be characterised, and if possible, modelled? How applicable are these findings in P. aeruginosa to other pathogens, especially ESKAPE? What animal-host models should be used to represent the pharmacodynamics of infection and the pharmacokinetics of the drug combinations? What are the potential toxicities of these drug combinations? How would the pharmacokinetics-pharmacodynamic effect play out clinically in patients suffering from kidney and liver impairment? Presumably, these combinations will be used as a drug of last resort in patients who are very ill, so the functions of the major metabolising (liver) and excreting (kidney) organs need to be taken into consideration.

Near the end of the eponymous musical, the Phantom of the Opera declared triumphantly that “the games are at an end”. Our misuse and overuse of antibiotics have pushed us to the point of no return, and the parallels to the equally spooky spectre of running out of effective antibiotics are painfully clear. In finding new strategies in our uphill battle, I hope that we will one day—like the Phantom—proclaim that there is “no use resisting”.