Pyroptosis is an inflammatory form of cell death characterized by membrane disruption leading to lytic cell death and release of inflammatory molecules, including IL-1 family cytokines. This membrane disruption is the result of pores formed by the protein gasdermin D (GSDMD), which is cleaved by inflammatory caspases following infection or inflammasome activation. The N-terminal fragment of cleaved GSDMD (NT-GSDMD) localizes to the membrane and oligomerizes to form pores which permit the transit of relatively small molecules (including IL-1 family cytokines) and eventually lead to full lytic cell death. While the upstream events leading to GSDMD cleavage have been more deeply studied, the extent of regulation of pore formation remains unclear. In this preprint, Evavold et al present a forward genetic screen and identify a novel regulatory mechanism of GSDMD pore formation.

The authors used their new system to perform a genome-wide CRISPR screen to identify regulators of pore formation. By examining guide sequences depleted from the highest BFP+/PI- cells, the authors identified genes specifically required for pore formation downstream of GSDMD cleavage. The top hits included multiple components of the Rag-Ragulator complex, which is responsible for recruiting mTORC1 to lysosomes for amino acid sensing. Follow-up experiments using targeted knockouts revealed that Ragulator and mTORC1, but not mTORC2, are required for proper pore formation and pyroptosis, but not for membrane localization of NT-GSDMD., In natural pyroptotic settings, such as Salmonella infection, mTORC1-deficient cells were resistant to pyroptosis, even while they showed proper GSDMD cleavage, confirming the role of Ragulator/mTORC1 in regulating GSDMD pore formation. 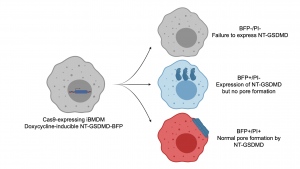 This study decouples GSDMD cleavage and membrane recruitment from pore formation and downstream cytokine release and cell death. This adds a new layer of regulatory potential to the process of pyroptosis, and promises to reshape how we understand this process of regulated cell death. The potential integration of cellular metabolic state or activity with GSDMD pore formation, through Ragulator/mTORC1, also presents an intriguing new area of study in the field of cell death.