Initiation appears to be more important than pausing in transcriptional regulation

Transcription can be thought of as a series of biochemical steps. The promoter first must be made competent for RNA polymerase II (Pol II) binding, forming a pre-initiation complex. The complex pauses transiently 30-60 nucleotides downstream of the transcription start site (TSS), and post-translational modifications to Pol II subsequently results in pause release, leading to productive elongation of the transcript. Using the ratio of Pol II throughout the gene body to Pol II at the promoter proximal region as a proxy for levels of pausing (pausing index), it has been suggested that pause-release is an important step in gene regulation. While some or all of these steps are thought to be regulated, the relative contributions of each step to gene regulation or the rate-limiting step in transcription remains unclear. In addition, since enhancers are thought to activate transcription, it is important to understand which step enhancers regulate. To study these questions, the authors developed short capped RNA sequencing (scaRNA-seq) to simultaneously measure the TSS and TPS (transcription pause site) of genes.

The primary claim of the preprint is that enhancers regulate gene expression primarily through transcription initiation, which can be either RNA polymerase II recruitment or simply initiating production of a transcript. To simultaneously assay pausing and initiation, the authors modified the Start-seq (Nechaev et al., 2010; Henriques et al., 2013) assay to develop scaRNA-seq. Briefly, scaRNA-seq measures transcripts up to 300nt (instead of around 100nt), and paired-end sequencing is done to identify the 3’ ends of the transcript, which corresponds to the TPS. In this way, all paused transcripts up to 300nt can be identified. By combining this information with nascent RNA-seq, the authors set up a model to distinguish whether pausing or initiation was changing, using the differentiation of mouse primary erythroid cells as a system (Figure 1a). When genes are activated/silenced during differentiation, changes in gene expression could be due to either pausing gain (quadrant A), initiation gain (quadrant B), initiation loss (quadrant C) or pausing loss (quadrant D). They found that more than 90% of the differentially expressed genes fell in quadrant B and C (Figure 1b), suggesting that changes in gene expression across differentiation are primarily due to changes in initiation.

To directly test whether the enhancers indeed regulate transcription initiation, the authors deleted well characterized enhancers and performed scaRNA-seq to study changes at their target genes. They chose the R1 and R2 enhancers (ΔR1R2), which regulate the α-globin genes and the HS2 and HS3 enhancers (ΔHS2HS3), which regulate the β-globin genes. They then generated homozygous mice containing these deletions and performed scaRNA-seq on primary erythroid cells derived from fetal liver. The scaRNA-seq results show that the number of scaRNAs are substantially decreased at both globin target genes, suggesting that transcription initiation is being downregulated in the enhancer mutants, not pausing. Because previous papers have used the pausing index to conclude that pausing is important at these genes, the authors also performed Pol II ChIP-seq in the enhancer deletions and showed an overall decrease in Pol II on the gene. They then calculated the pausing index and showed that they could recapitulate the increase in pausing in ΔR1R2 and ΔHS2HS3. These results highlight the need for using the right assay to measure pausing.

In performing and validating scaRNA-seq, the authors also found that annotated TSS positions appear to be skewed upstream of their actual positions, regardless of which annotation they checked. This suggested that there might have been some systematic bias in the methods that have been used to measure TSSs previously. TSS and TPS distributions both appear to be narrower than previously described, and the pause site appears to be enriched at 46bp rather than 86bp downstream of the TSS. 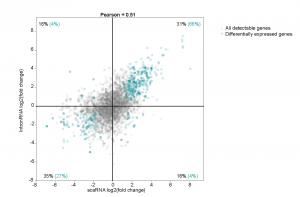 It is quite clear that transcription involves a couple of key biochemical reactions. However, what remains unclear is which steps are actively regulated to control gene expression or which step is rate-limiting. To understand these still open questions, studies often assess initiation and pausing at individual genes or use in vitro systems. The authors were quite clever to address this question genome-wide by tweaking methods that already exist. They also show that the pausing index is not a good measure of pausing, even though this has been used quite a bit in the field. This suggests that just because something is measurable does not mean it is always important, and underscores the need for using the right assay to address specific questions. The way that the preprint is structured also made it easy to read. By setting up the model at the beginning, interpreting the results was quite straightforward.

Since scaRNA-seq is a modification of the Start-seq protocol, is there any explanation for why the TSSs observed by scaRNA-seq and Start-seq are so different?

It is possible that enhancers can regulate more than one step in transcription. Since pausing comes after initiation, could this method be missing any regulation in pausing?

Pausing was originally discovered to be important in fast response genes, such as heat shock genes. In the differentiation model used in this preprint, genes need to be turned on permanently and relatively slowly compared to environmental response genes. It would be interesting to use this model to compare the differences between fast and slower responding genes.

Firstly, many thanks to Clarice for summarizing our work so concisely and for the opportunity to offer comment on questions raised.

Q1) Since scaRNA-seq is a modification of the Start-seq protocol, is there any explanation for why the TSSs observed by scaRNA-seq and Start-seq are so different?

We believe the differences in the relative position of these observed and annotated TSSs, lie in way in which they are filtered during the process of pairing them to annotated TSSs.

We took a very simplistic approach, identifying TSSs from scaRNA using Homer and retaining them if they fell within 500bp (+/-) of a unique 5’ end of an annotated UCSC gene. By plotting the distance of our observed TSS against these we noticed the skew.

In Start-seq the authors state that:

“Generally, when genomic data were not in overall agreement the annotated TSS was retained, Otherwise, a preference toward minimal distance re-annotation informed the process… where multiple locations meet the selection criteria, the sites closest to and most upstream relative to the annotated TSS were selected.”

We therefore suspect in doing so any skew of observed TSS downstream of annotated TSS would be reduced. Also, a skew upstream of the annotated TSS may be created.

When Start-seq raw data is plotted is plotted across Refseq or Start-seq TSSs, a skew in data coverage downstream of the annotated TSS is visible (Figure S1A, Scruggs et al., 2015) 1, confirming it exists in this cell type (MEF), and is therefore independent of cell type and rather inherent to all annotations.

Q2) It is possible that enhancers can regulate more than one step in transcription. Since pausing comes after initiation, could this method be missing any regulation in pausing?

This is an interesting question, although we suggest the predominant changes in gene regulation are brought about by enhancers acting on transcription initiation, further modulation of the transcription cycle may allow fine tuning of transcription.

I think we would be naïve to assume there is absolutely no regulation beyond initiation but what our data shows is that initiation explain differential changes in gene expression for 93% of differentially expressed genes. There is however some wiggle room! Our Pearson r values are around 0.5, so although the trend is positive it may be a very stochastic process, where many scaRNAs do not go on to generate mRNA and there is further fine tuning of this process.

We strongly suspect that instead of stable regulated Pol II which is held on a promoter for several minutes, this process is extremely stochastic, with only around 1/100 Pol II molecules engaging, coming to pause and then clearing the +1 nucleosome, in line with recent live cell imaging studies 2,3. We think it’s more about enhancers increasing the likelihood of initiation/elongation by recruiting Pol II and transcription machinery, rather than directly releasing a paused complex.

Q3) Pausing was originally discovered to be important in fast response genes, such as heat shock genes. In the differentiation model used in this preprint, genes need to be turned on permanently and relatively slowly compared to environmental response genes. It would be interesting to use this model to compare the differences between fast and slower responding genes.

This is a difficult question to answer, as if the heat shock genes are not expressed in our model system, we cannot examine their changes in pausing relative to other genes. Work by Dirk Schübelers laboratory suggested that in fact both “highly” paused genes such as heat shock and “housekeepers” actually respond at similar rates 4 and that Pol II turnover is very fast at both classes.

Pausing has a deep history, rooted in the study of heat shock genes in Drosophila. However the first gene to be reported as bearing “paused” Pol II in primary cells, was beta globin in chicken erythrocytes 5. Therefore, many of the model of pausing that were built in the 1990’s to explain heat shock response in Drosophila were applied to mammalian genes and used to justify a global mechanism of Pol II pausing across metazoans, with the extensive use of pausing index to classify genes as paused or not paused arbitrarily 6,7.

We felt that examining beta globin in primary cells would allow us a clearer picture of transcription in a natural system. We believe that by reexamining this important gene and cell type using the latest high-resolution techniques we have clearly shown that regulation does not occur through pausing. Therefore, if beta globin is not paused in the canonical manner, then the implications for all other paused genes, defined using similar criteria are significant.