A close, really close glimpse into the world of viruses within the host cell using innovative Cryo-EM 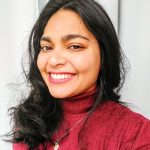 Cryogenic electron microscopy (Cryo-EM) has recently emerged as a reliable method to determine high-resolution biomolecular structures of a range of samples, from proteins, nucleic acids, and viruses to whole cells. Unlike in a conventional transmission electron microscope (TEM), the microscope and the samples are maintained at cryogenic temperatures (~-190°C). The samples are prepared by plunge-freezing them in a bath of liquid nitrogen-cooled ethane on a TEM grid. The water freezes rapidly to a disordered glassy state (vitrification) [1], without forming crystalline ice that would both cause damage and diffract strongly on encountering the electron beam, thereby obscuring the sample.

Cryo-EM is often a preferred choice where dehydration, harsh fixatives, and metal contrasting agents alter the native structures and give rise to undesirable artefacts e.g. determination of high-resolution 3D structures of purified proteins. For larger samples like viruses (or for cellular ultrastructure), cryo-electron tomography (cryo-ET) is preferred where a series of 2D TEM projections are obtained by tilting the sample through ~120° and are computationally back-projected to obtain the 3D structure. The resulting tomograms can be used to build high-resolution structures in a method called sub-tomogram averaging.

The current work focuses on the pathogenic herpes simplex virus-1 (HSV-1), which is a causative agent of oral herpes or ‘cold sores’. HSV-1 is a fairly large-sized virus (~1300 Å) that initially replicates within host nuclei to give rise to newly-formed virions whose capsids now enclose the dsDNA genome of the virus [2]. In the cytoplasm, they are enclosed in a protein-rich layer (the tegument) that is made up of assemblies called capsid-associated tegument complex (CATC), which is composed of 3 main proteins viz pUL17, pUL25, and pUL36. Here, Vijayakrishnan et al. aimed to elucidate the infectious cycle of HSV-1 within the host cell using Correlative Light Electron Microscopy (CLEM) to identify foci of replicating virus in a confocal microscope, before cryo-ET of these regions. The authors successfully integrated several EM and analysis techniques to shed more light on the in situ infectious cycle of HSV-1.

The authors used an RFP tagged HSV-1 to infect the host baby hamster kidney cells (BHK-21). Samples were prepared using the Tokuyasu method, in which the infected cells were fixed with aldehydes and embedded in gelatin before being frozen in liquid nitrogen [3]. Following this, sections of ~200 nm were cut using a cryo-microtome and collected on a holey TEM grid. These sections were observed under a confocal microscope to identify RFP expressing HSV-1 regions, before cryo-ET of these regions of interest (ROIs) (Fig 1; (i)). These grids were then re-vitrified by plunging in liquid ethane and low magnification TEM images were then overlaid on the fluorescence map (CLEM). Tomograms were obtained in regions that showed a good density of viruses.

The precise sub-cellular (nucleus or cytoplasm) recruitment location of pUL36 to CATC of the virus has been of a debate in the field. To lay this to rest, the authors have used a mutant strain of the virus- FRΔUL37 (null mutant for pUL37 tegument protein) to infect host cells. The pUL36 protein is vital for virion particles to bud off from the nucleus whereas the absence of pUL37 does not any adverse effect on nuclear egress. Unlike the wild-type strain, HSV-1 FRΔUL37 nucleocapsids are not directed to the trans-Golgi network and accumulate in the cytoplasm [4]. Cryo-ET was done at both cytoplasmic and nuclear locations where there was a large density of virion particles (Fig 1; (ii)).

Three kinds of capsids were observed from cryo-ET- empty (A), scaffold-protein containing (B), and DNA filled (C), whose structures were later determined from sub-tomogram averaging (Fig 1; (iii)). It is noteworthy to observe that both B and C capsids were seen in the nucleus but the cytoplasm contained mostly C-capsids suggesting that the virion was fully formed along with the CATC before nuclear egress. Structural analysis of the 3 types revealed that only C-capsid had similar CATC densities as seen in previous averaged data from purified HSV- 1 [2,5]. The calculated resolution obtained from this analysis was about 6.4nm (Fig 1; (iv)). The observed CATC densities on the C-capsid were further corroborated using a focused classification method that can further refine structures within an already averaged structure.

In summary, the data emerging from the analysis adequately points in the direction that pUL36 recruitment happens within the nucleus as almost all C-type nucleocapsids have CATC densities that are comparable to a fully mature virus. This is the first time that precise structures have been determined from viruses that are within the nucleus- the virus’s replication site.

I have an interest in cryo-EM of samples in their functional context i.e. within whole cells. This preprint effectively integrates several aspects of cryo-EM very innovatively. The work-flow is simple to follow and it is promising for those who want to study cellular and macromolecular ultrastructure in their near-native form. The methods do not entail the use of highly specialized instruments making it plausible for many labs to be able to adopt it straight away.

Why was the RFP tagged HSV-1 not suitable enough for understanding the precise location of pUL36 recruitment?

The RFP tagged HSV used in this study is the wild type (WT) virus. It has been shown that both pUL36 and pUL37 (or at least part of them) are recruited to capsids in the nucleus prior to egress. Therefore, with WT capsids assembled in the nucleus, the density over the 5-fold vertices in our capsid structures would have included both pUL36 and pUL37. However, at the resolution (6 nm) at which we are, it would be extremely difficult to distinguish them. By using a mutant with one of them (pUL37) absent, we overcome this problem and rule out any ambiguity, confirming that the star-like density observed in our capsid structure is only contributed by pUL36.

Given you have low shrinkage artefacts, have you tried merging tomograms from serial sections to yield data from larger volumes?

This is an interesting idea. Our goal in this study was to determine 3D structures from re-vitrified sections via subtomogram averaging. For the purpose of this study, the volume of a single section (200 nm thick section) proved sufficient to obtain the 3D structure of capsids (diameter 125 nm). However, if larger structures (> 200 nm) were desired involving virus and host components, such as capsids in the process of membrane encapsidation or travelling along the ER and trans-Golgi network, merging tomograms from serial sections would prove useful providing a more complete view of these structures as well as the mechanism within the cell.

Would dual-axis tomography have any influence in achieving better-averaged structures from sub-tomogram averaging?

Yes, this is plausible. It is known that single-axis cryo tomography produces elongation along the Z-direction and loss of contrast in the X/Y-direction (for filamentous or extended structures). Dual-axis tomography has shown to efficiently correct the latter artefact. Moreover, using dual-axis provides better coverage and sampling of Fourier space, resulting in reduction of the missing wedge and angular tilt ranges needed during data collection. This increases the isotropic resolution and quality of the tomogram, and could potentially impact the final resolution of structures obtained by STA. However, as radiation damage is still a big problem, the overall low electron dose on the samples will have to be evenly spread over the dual tilt axes series. Currently there are no STA data based on dual axis tomography. Therefore, optimizing signal-to-noise, total dose, use of phase plates and data acquisition schemes for dual axis tomography using direct electron detectors to obtain high-resolution tomograms and structures by STA needs further investigation.