ALL together: development and comparison of distinct zebrafish models of B cell Acute Lymphoblastic Leukemia

Acute lymphoblastic leukemia (ALL) arises from lymphoblasts within the bone marrow. Lymphoblasts differentiate into either immature T or  B cells, which are the cells-of-origin for the two main subclasses of ALL, T-ALL and B-ALL. Zebrafish models of T-ALL have been used successfully for the past 15 years, as their haematological, immunological and oncological pathways are highly conserved in humans. However, despite the clinical relevance of pre (precursor)-B-ALL, as it is the most common paediatric cancer, zebrafish B-ALL models went unrecognised until very recently.

Earlier this year, the Langenau and Frazer labs both published independent reports in the journal Leukemia detailing their discovery of zebrafish B-ALL models within pre-existing T-ALL models [1],[2]. Both groups used zebrafish expressing an oncogenic Myc transgene driven by the B/T cell-specific recombination gene rag2 promoter, which caused fish to develop ALLs. It was assumed from previous research that only T-ALL leukemias would develop in these models, but unexpectedly, both groups found a subpopulation of leukemias that were phenotypically and transcriptionally characteristic of B-ALL, or in one case, a mixture of B- and T-ALL (termed biphenotypic ALL). Where the two models differ is the species origin of the Myc transgene, and the genetic background of the fish – the Langenau group use a murine-derived Myc transgene (mMyc) and the Frazer group use a human-derived transgene (hMYC).  Although these transgenes are highly similar, it raises the possibility that the leukemias generated by the two models might have important differences that could both undermine or expand their usefulness in modelling human ALL.

In this preprint, the two groups show the results of their collaboration to validate, compare and contrast these B-ALL models at the transcriptional level. Happily, they confirm both models as driving B-ALL formation alongside T-ALL, and also find that unexpectedly, their B-ALLs originate from different B cell lineages, thus potentially modelling different subtypes of B-ALL.

First of all, the authors performed RNA-seq on 13 hMYC ALLs so that they could be compared to the published mMyc RNA-seq data. Principal component analyses of expression profiles from both datasets showed that the data clustered not according to species’ transgene, but whether they were more characteristic of T-ALL or B-ALLs, with the single biphenotypic ALL clustering between the two groups, as shown in Figure 1A from the preprint, below: 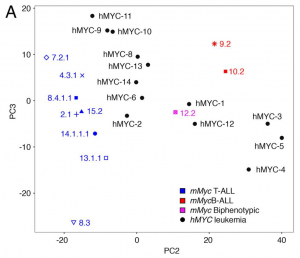 This is a PCA plot of RNAseq expression profiles from previously classified mMyc-induced ALL (blue, red and pink), and hMYC-induced ALL (black). The previously proposed hMYC T-ALLs (2, 6, 8-11, 13,14) cluster near mMyc T-ALLs (blue), proposed hMYC B-ALLs (3-5) near mMyc B-ALLs (red) and two hMYC ALLs (1 & 12) near the mMyc biphenotypic-ALL (pink).

The identities of tumours within these clusters was confirmed by hierarchical clustering with the top 100 positively/negatively regulated genes, which showed that all T-ALLs expressed the same T cell markers, B-ALLs expressed B cell markers and biphenotypic/mixed ALLs expressed a mixture of these.

Differences between the two models were revealed upon investigating the clonality and maturation of B and T cell receptors in hMYC and mMyc ALLs. Perhaps unsurprisingly, the T cell receptor tcrβ was expressed in all T- and biphenotypic-ALLs, but absent in B-ALLs. Interestingly, B-ALL leukemias differed in which B-cell receptor they preferred to express, with hMYC B-ALLs favouring the ighz form and mMyc-driven B-ALLs favouring the ighm form. Ontological comparison of genes uniquely expressed in  T-ALLs, hMYC ighz+ B-ALLs and mMyc ighm+ B-ALLs, confirmed a transcriptional divergence between the two B-ALL types.

Taken together, this suggests that although the oncogene driving B-ALL in both models is very similar, they appear to be derived from different B cell lineages. This is exciting, as it means that we have gone from being able to model just T-ALL in zebrafish, to being able to model three more subtypes of ALL – hMYC ighz+ B-ALL, mMyc ighm+ B-ALL, as well as biphenotypic ALL.

The ‘Confirmatory Results’ is a new tag for me on Biorxiv.org, as most of the uploaded reports I’ve found so far fall into the ‘New Results’ category. With the rise in media coverage about the lack of reproducibility in scientific studies, it is good to see groups collaborating to confirm and build upon their research, and to make these findings accessible to everyone. From a disease modelling standpoint, detailed characterisation and comparison of new models is important so we know how closely they recapitulate different facets of human pathologies. It will be exciting to see how these B-ALL models can now be employed to explore any differences in their molecular aetiologies and treatment responses alongside their T-ALL counterparts.

The articles this preprint compares:

KF: As you suggest, the different transcriptional profiles of these two B-ALL types might also drive different in vivo phenotypes, but we don’t know these answers yet. Also, not only do their Myc/MYC oncogenes differ, they also have different strain backgrounds, which could impart subtle (maybe even profound?) differences. Further, the Langenau group propagates ALL by allo-transplantation, while we primarily study de novo ALL, so it’s currently not apples-to-apples with respect to latency, aggressiveness, or other in vivo differences. Personally, I’m intrigued that distinct B cell lineages are apparently differentially affected by mMyc vs. hMYC. My own speculative hypothesis is that the murine and human MYC oncoproteins may differ in their abilities to interact with key zebrafish co-factors, and consequently, the genomic sites bound by mMyc/hMYC and gene expression changes they induce are non-identical. We could test this by getting mMyc and hMYC on the same strain background, and then doing ChIP-seq for the two MYCs coupled with RNA-seq gene expression profiling. Maybe we should do that…

DL: By contrast, we favor a hypothesis that strain differences are driving the types of tumors that are favored.

KF: Great question, we want to know that. One limitation is not much is known about zebrafish B cell development, which complicates equating individual B-ALLs (or the ighz+ vs. ighm+ B-ALL types), to distinct immature B cell stages. In human B-ALL cases, we can often figure out a “differentiation arrest point” for individual cancers, but we need to refine our understanding of zebrafish B lymphopoiesis in order to do that. A related problem is: What do the zebrafish ighz and ighm lineages really mean with respect to humans? In people, all B cells start out as IgM, and all naïve B cells (i.e., those not yet stimulated by antigen) are IgM+/IgD+. Then, in germinal centers, many B cells undergo “isotype switching” to lose IgM and become IgG+, IgE+, or IgA+. Based on how its immunoglobulin heavy chain locus is arranged, it seems isotype switching doesn’t happen in zebrafish. Rather, individual B cells must choose to be either ighz+ or ighm+ up front, so naïve B cells of both B lineages are present. IgZ has both cell surface and secretory forms, so in that way it resembles human IgG and IgA, but class switching in zebrafish doesn’t seem to exist, so it’s unclear where IgZ fits in. The bottom line is, until we know a bit more basic zebrafish immunology, I think it’s going to be tough to answer your question properly.

DL: It is also clear that IgZ+ B cells represent an ancestral type of B cells that are not retained in human or mouse.

KF: I’m not sure I agree with Dave, although he may be right. I think he’s correct that this is the prevailing opinion in the field, and I concur that IgZ doesn’t have a clear mammalian homologue, but I’m not yet convinced that this entire B cell lineage is lacking in mammals.

KF: I struggle to prioritize my ideas, but here are a few things I hope we can do: