The short road to symbiosis – mutations in one regulatory pathway are sufficient to turn E. coli into an effective stink bug symbiont 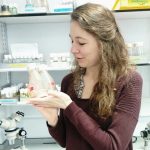 Updated 13 September 2022 with a postLight by Olivia Tidswell

This preprint was published in the journal Nature Microbiology on the 4th of August, 2022 (Koga et al., 2022). The majority of the manuscript is identical to the original preprint, but a few minor changes have been implemented since the preprint was published. For example, the abstract and introduction have been expanded slightly to give more context to the results, and the statistical analyses are described in more detail to conform to the requirements of the journal.

The most significant change made to the manuscript is the addition of information about the CCR (carbon catabolite repression) pathway in the genome of Pantoea, the native symbiont of Plautia stali. In the manuscript, Koga et al. show that mutations in the CCR pathway are sufficient to turn E. coli into a reasonably effective mutualist of P. stali. They propose that mutation of the CCR pathway, and subsequent changes in metabolism, may be a ‘pivotal evolutionary step’ for microbes to move towards mutualistic relationships with their hosts. However, this does not seem to be the case for Pantoea – in the published paper, the authors report that Pantoea actually has a full complement of CCR pathway genes, despite the fact that its genome is littered with pseudogenes. This suggests that mutation of the CCR pathway was not required for the evolution of P. stali’s native symbiont. I hope that future studies will be able to shed light on just how common CCR mutations are in mutualistic bacteria, and on alternative pathways to mutualism.

Many eukaryotic organisms rely on intimate relationships with microbial partners for their survival. However, we still have a poor understanding of how symbiotic microbial mutualists evolve from free-living, non-symbiotic microbes.

The brown-winged green stink bug, Plautia stali (Pentatomidae), is a promising model for studying this process. Like many phytophagous insects, it relies on microbial symbionts to supplement its nutrient-poor diet. Specifically, P. stali nymphs and adults harbour various strains of the bacteria Pantoea in specialised midgut crypts. Some of these strains are highly specialised for life within the host (e.g., they have reduced genomes and are uncultivable in the lab), but others are more similar to free-living, environmental strains1. This suggests that P. stali has some flexibility when it comes to selecting its bacterial partners.

In this preprint, Koga and colleagues make use of P. stali’s symbiotic promiscuity by infecting it with the model bacterium Escherichia coli. E. coli does not engage in symbiosis with P. stali in the wild, but using experimental evolution the authors were able to mould it into a symbiotic partner that can substitute for Pantoea. The authors found that the symbiotic success of modified E. coli lines can be largely attributed to mutations in a single regulatory pathway. This study therefore reveals that relatively few genetic changes can turn a poor symbiont into a relatively effective one.

Adult P. stali are able to transmit Pantoea symbionts to their offspring by smearing their eggs with an excretion from the midgut, which is subsequently consumed by the nymphs after hatching. Sterilising the egg surface kills the symbionts, and nymphs hatched from sterilised eggs fail to reach adulthood. However, Koga and colleagues found that when surface-sterilised eggs were infected with E. coli, a small percentage of nymphs survived to adulthood. This non-symbiotic model bacterium was acting as an (admittedly subpar) substitute for the natural symbiont.

The authors decided to find out whether this weak symbiotic interaction could be improved by experimental evolution. They infected surface-sterilised eggs of P. stali with either the ΔmutS strain of E. coli – which displays an elevated mutation rate, and therefore a more rapid rate of evolution – or with a control strain from the same genetic background. They then selected emerging adult stinkbugs for either rapid development or for the intensity of their green pigmentation (both features of healthy, symbiont-associated P. stali). The bacteria from selected stinkbugs were collected and used to infect the next generation.

They found that two ΔmutS E. coli lines became significantly better symbionts within just 12-14 generations of artificial selection. Stinkbugs infected with these E. coli lines were more likely to reach adulthood, reached adulthood faster, and were greener than those infected by control E. coli lines. Genome and transcriptome sequencing revealed that the two improved lines had something in common – mutations in the so-called carbon catabolite repression (CCR) pathway. In the absence of glucose, this pathway is responsible for upregulating hundreds of operons and thereby switching the metabolism towards alternative carbon sources. Amazingly, introducing just one of these CCR pathway mutations into E. coli was enough to make it a significantly better symbiont. Stink bug nymphs infected with ΔcyaA or crp221T>C mutants (both of which are predicted to lack CCR pathway activity) were significantly more likely to survive to adulthood than those infected with a control E. coli line, and were almost as likely to survive as those infected by the natural symbiont, Pantoea (Figure 1). 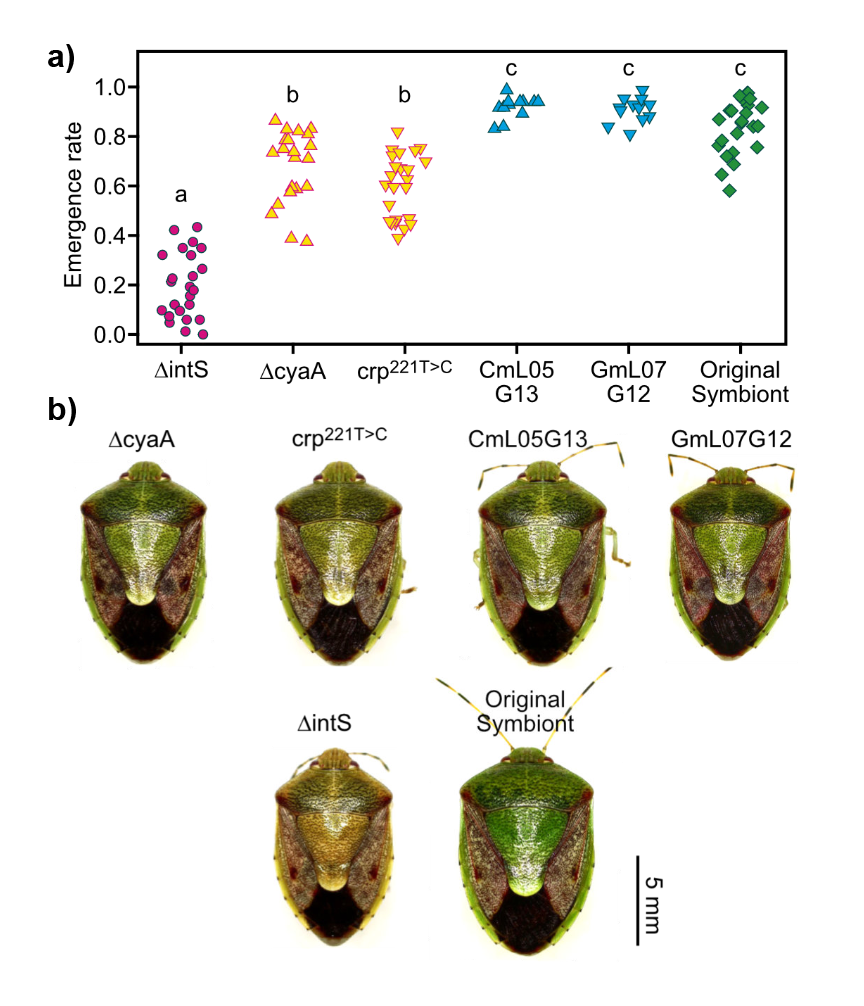 Figure 1. Single mutations in components of the CCR pathway (ΔcyaA and crp221T>C) of E. coli make it a better symbiont of the stinkbug P. stali. These mutations increase the adult emergence rate (a) and greenness (b) of infected P. stali compared to a control line (ΔintS) almost to the levels of the ‘improved’ evolved lines CmL05 and GmL07 and the original symbiont. Modified from Figure 4 of Koga et al. 2022.

This preprint presents several important new findings for the field of symbiosis research. Firstly, symbionts are usually extremely specialised and difficult to culture or modify in the lab. By engineering a symbiotic relationship between P. stali and the model bacterium E. coli, the authors have created a highly tractable system for studying insect-microbe symbiosis.

Secondly, the authors’ findings suggest that the bacterial CCR pathway might represent a key mutational nexus in the evolution of symbiosis. If a single mutation in an upstream CCR pathway component is sufficient to generate significant improvements in the fitness of infected hosts, then symbioses between insects and bacteria might be able to evolve more rapidly and more easily than previously thought.

I am excited to see what further knowledge the authors can glean from this engineered symbiosis.