Melanoma is the most aggressive form of skin cancer but despite advances in melanoma research, the prognosis for advanced melanoma remains poor, as tumours are highly resistant to chemotherapy. One reason for this is that melanomas can switch their phenotype between highly proliferative but non-invasive, to slowly proliferating and highly invasive, thus evading the actions of drugs and continuing to grow and metastasise[1].

A key genetic factor in this melanoma phenotype switching is the transcription factor MITF, which controls the development, differentiation and pigmentation of melanocytes, the cells from which melanomas occur. Melanomas with high MITF levels are characteristic of having the highly proliferative but non-invasive phenotype, whereas MITF-low melanomas proliferate slowly but are highly metastatic.

Therefore, understanding the regulation of MITF and its targets is important when designing therapies to halt melanoma growth and progression. A promising candidate for such a regulator is the transcription factor STAT3. 50% of melanoma patients have enhanced activation of STAT3, and in vitro, STAT3 activation causes cells to acquire melanoma-initiating and stem cell-like properties, thus promoting melanoma growth[2]. However, its precise role in vivo, and whether directly it regulates gene expression – particularly MITF – remains unclear.

To investigate the effect of STAT3 loss in melanoma, the authors conditionally deleted the Stat3 gene in an existing genetic mouse model of human cutaneous melanoma to obtain the line Tyr::NRASQ61K;Ink4a-/- ; Stat3flox/flox; Tyr::Cre, which they termed Stat3Δ.  Control mice were from the same genetic background, but lacked Tyr::Cre and so expressed Stat3 at normal levels.

Stat3Δ mice developed tumours significantly earlier than controls, and these tumours were reminiscent of MITF-high melanomas as they were more proliferative and pigmented, but non-invasive. Conversely, control mice developed more micrometastases in their lungs, phenotypically characteristic of MITF-low melanomas (see Figure below). Xenograft studies and in vitro invasion assays using Stat3Δ-derived cells supported these findings. 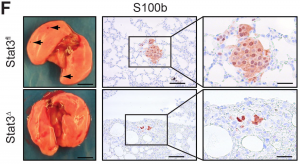 This led the authors to hypothesise that STAT3 activity might influence melanoma phenotype switching by regulating MITF expression.  To test this, the authors compared the transcriptomes of cells isolated from Stat3Δ  tumours to controls through analysis of a microarray dataset. Indeed, Stat3Δ cells had strongly upregulated levels of MITF and its targets, and in general, their transcriptome resembled MITF-driven proliferation signatures found in previous melanoma cohort studies.

Next, to explore the mechanism of this MITF upregulation in Stat3Δ  cells, the authors performed ATAC-seq to see whether STAT3 or its downstream targets might directly bind to the Mitf promoter region to influence gene expression. Interestingly, an accessible binding region for the STAT3 targets CEBPA and CEBPB was found within the Mitf promoter region in control cells, but not in Stat3Δ cells. Moreover, rescuing Cebpa levels in  Stat3Δ  cells led to Mitf downregulation. This suggests that STAT3 deletion in melanoma causes epigenetic changes to chromatin, which leads to large changes in gene expression and tumour behaviour as a result of its targets CEBPA/B repressing the MITF pathway.

Finally, the authors showed that these findings have clinical relevance in human melanoma. shRNA-mediated knockdown of STAT3 in human melanoma cell lines recapitulated changes in gene expression seen in Stat3Δ cells. The authors also searched publicly available cancer genome databases to confirm STAT3-low/MITF-high expression signatures are found in humans. Interestingly, patients with poorer prognoses were more likely to have high levels of MITF, and low STAT3, CEBPA and CEBPB levels. This suggests that the balance between STAT3 and MITF in different stages of melanoma is important, and this could be a good target for designing new therapies.

Working in a Cancer Research institute, it is always disheartening to learn about how quickly melanoma patients develop resistance to treatment, and how aggressively their tumours can reoccur, despite huge efforts to search for chemo and immunotherapies to target and kill melanoma. From this preprint, and other studies on MITF in melanoma, it is worrying to learn that common therapies like BRAF inhibitors cause a reduction in MITF levels, and therefore could actually worsen outcomes if used in isolation. Therefore, I think this preprint highlights a potential target for regulating MITF levels in melanoma, but also shows there are huge challenges ahead in correctly balancing and timing drug treatment to prevent unwanted activation of genes which can exert large effects on tumour growth and survival.