The Design, Synthesis, and Evaluation of Hypoxia-Activated Prodrugs of the KDAC Inhibitor Panobinostat

‘Cause you carried me with you: prodrugs of the KDAC inhibitor panobinostat activated by low oxygen environments

Background of preprint: ‘cause you carried me with you

Prodrugs are substances that are converted by the body into their active drug forms. This can happen for a variety of reasons—ranging from poor solubility and absorption by the body to difficulties in reaching their intended physiological targets. In the case of anticancer therapy, it is especially difficult to deliver therapeutics to their intended site of action due to inefficient blood supply permeating tumours.

While this limited blood supply has traditionally proven a bottleneck in the anticancer drug delivery, researchers have turned this into a potential opportunity. For slightly over a decade, researchers have been developing prodrugs that can be activated by hypoxia—low oxygen levels—that is caused by the limited blood supply in tumours. These prodrugs, known as hypoxia-activated prodrugs, thus selectively target tumours with this characteristic.

In this preprint, Calder et al. have identified an opportunity to apply this concept to anticancer therapy involving histone / lysine deacetylases (H / KDAC), enzymes whose dysregulation have been implicated in oncogenesis. Notably, a few drugs that target KDAC have already been clinically approved, providing a good backdrop for this work. Indeed, the same group previously applied this strategy successfully to the KDAC inhibitor vorinostat,1 and they now apply it to panobinostat.

In this work, Calder et al. apply a similar strategy to panobinostat by applying a nitroimidazole group that becomes deprotected in hypoxic environments (Fig. 1). Specifically, they first designed four prodrugs and a negative control (Fig. 2). They then tested these designed analogues and panobinostat in both normal and low-oxygen environments (Table 1), in which the prodrugs were incubated with NADPH-CYP reductase (CYP 004). 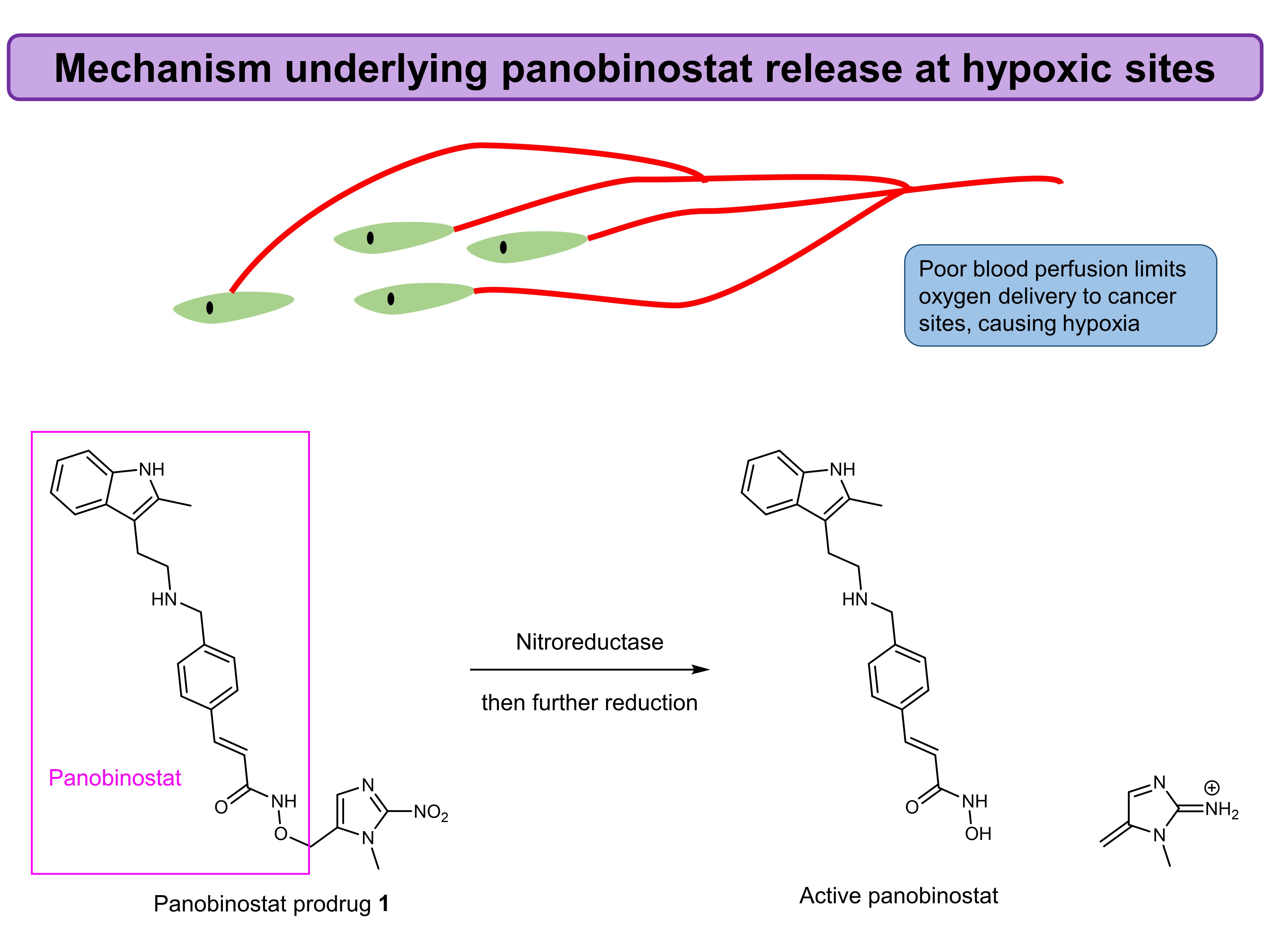 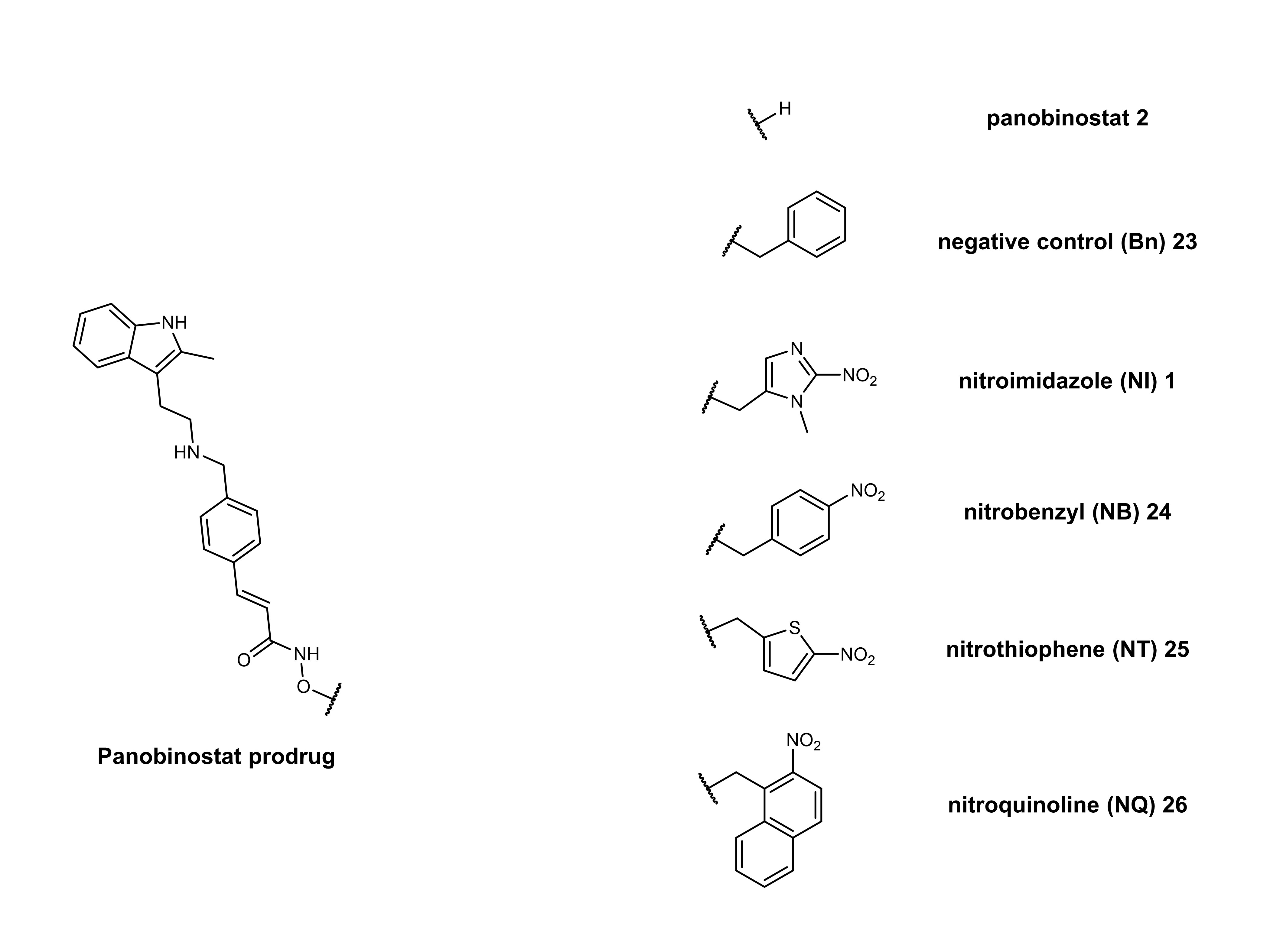 Figure 2.  Prodrugs and their negative control designed and tested by Calder et al..

The authors then investigated NI and NQ further, testing these prodrugs’ inhibitory activity against KDAC. Because the NQ prodrug, but not the NI prodrug, displayed some inhibition, the authors then decided to focus on the NQ prodrug in testing against oesophageal adenocarcinoma (FLO-1) and colon cancer (HCT-116) cell lines. This last experiment confirmed that the NI prodrug was stable in normoxic environments but released panobinostat in hypoxic environments.

Table 1. Release profile of panobinostat and prodrugs in normoxic and hypoxic environments.

Specific drug targeting in cancers is an decades-old question for medicinal chemists and pharmacologists. Accordingly, proposed solutions to this problem have usually centred around the “hottest” technologies reflective of that era: physicochemical chemistry, nanotechnology, biologics like peptides and antibodies, and now chemical biology.

In Onward (2020), a pair of brothers in a world that has replaced magic with technology set out to rediscover it. There are some parallels in pushing through scientific frontiers—new technological advances enable work that might not have been possible before. Just like how one of the protagonists develops his magical powers in the film by conjuring a bridge, I selected this preprint because it represents an important link between the authors’ previous work with vorinostat1 and their latest work in an in vivo tumour xenograft model.

Future directions: sittin’ on the world together

If preclinical studies are successful, the next step for prodrugs would involve testing on human participants in clinical trials. Here the mechanism becomes especially important, and it is likely that these prodrugs will be tested in cancers in which hypoxia is significant.

One other interesting possibility lies in the many parallels between cancer and infectious disease—hypoxia has been implicated in some infections and may also affect host immune responses. If the same technology could be utilised to design new drugs to treat particularly difficult infections, that would certainly be a welcome development for our increasingly antibiotic-resistant planet.