Bariatric surgery, including sleeve gastrectomy (SG, surgical removal of ~80% of the stomach), is an effective treatment for obesity and metabolic diseases such as type 2 diabetes. The molecular basis of this improvement remains somewhat unclear. Bariatric surgery is known to alter the intestinal pool of bile acids, steroid acids produced by the liver and secreted into the gut to aid in digestion through solubilization of dietary lipids. Bile acids also act as signaling molecules, operating on sensors including the G-protein coupled receptor TGR5 and the nuclear hormone receptor FXR. While the effects of bariatric surgery on the total bile acid pool have been studied, the changes in individual bile acids, and their respective roles in mediating metabolic changes, have remained unclear. In this preprint, Chaudhari and Harris et al reveal the changes of a single bile acid, CA7S, and its effect on metabolic physiology.

Using ultra-high performance liquid chromatography-mass spectrometry (UPLC-MS), the authors examined individual bile acids in cecal contents of mice following SG surgery to treat diet-induced obesity. They observed an increase in only one bile acid, the sulfated cholic acid derivative CA7S. This bile acid was also elevated in the livers of mice after surgery, consistent with known biogenesis of sulfated bile acids, and in the fecal bile acid pools of human patients after SG.

Increased systemic GLP-1 levels are a known downstream effect of SG, and were indeed observed in the SG mouse model. One receptor known to be responsible for bile acid-mediated GLP-1 secretion is TGR5. The authors show that CA7S induces signaling, including calcium flux and subsequent GLP-1 secretion, in an intestinal endocrine cell line, and that this activity was dependent on TGR5 expression.

To decouple the effects of CA7S from other potential SG-induced changes, the authors administered CA7S by catheterization or by oral gavage. Both methods of administration increased circulating GLP-1 levels, and improved metabolic parameters – including circulating insulin levels in the catheterization model and improved glucose tolerance in the oral gavage model. Knockdown of the GLP-1 receptor in vivo reduced the magnitude of this effect, suggesting GLP-1 plays a major role in the in vivo effects of CA7S. 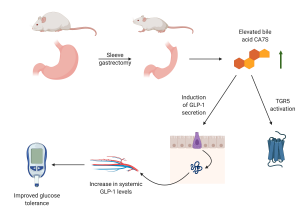 This preprint describes the first individual metabolite that is altered by bariatric surgery and that can individually mediate improved glucose regulation. It also describes a clearly defined molecular role for the bile acid CA7S, including its identification as a TGR5 agonist. Given the profound effectiveness of bariatric surgery for obesity and other metabolic disorders, and the complexity of bile acid changes following surgery, targeted investigations such as this will be necessary to realize a pharmacological, rather than surgical, intervention that can mimic the beneficial metabolic effects of surgery.

Insights into the salivary N-glycome of Lutzomyia longipalpis, vector of visceral leishmaniasis