Night-light plants! A fungal bioluminescence pathway adapted for use in plants results in an auto-luminescent reporter system.

Bioluminescent reporters such as the firefly luciferase have been widely used in eukaryotic systems. They are particularly appealing for use in plants as they do not require excitation and hence autofluorescence that is inherent to plant tissue can be avoided. A major disadvantage however is the need to deliver the luciferase substrate exogenously – causing issues with homogenous substrate delivery and tissue penetration. It would thus be highly desirable to generate plants that already produce the luciferase substrate. Kotlobay et al. (1) identified a novel luciferase/luciferin biosynthesis system, referred to as the caffeic acid cycle, in the eukaryotic fungus Neonothopanus nambi (Fig. 1). The fungal luciferin 3-hydroxyhispidin is produced from caffeic acid through the activity of two biosynthetic enzymes, hispidin synthase (HispS) and hispidin-3-hydroxylase (H3H). The luciferase (luz) subsequently generates a bioluminescent signal by oxidising 3-hydroxyhispidin; the resulting product can be recycled to caffeic acid by caffeoylpyruvate hydrolase (CPH). In their preprints, Mitiouchkina et al. and Khakhar et al. deploy this system in plants and show that it can be harnessed to monitor gene expression. 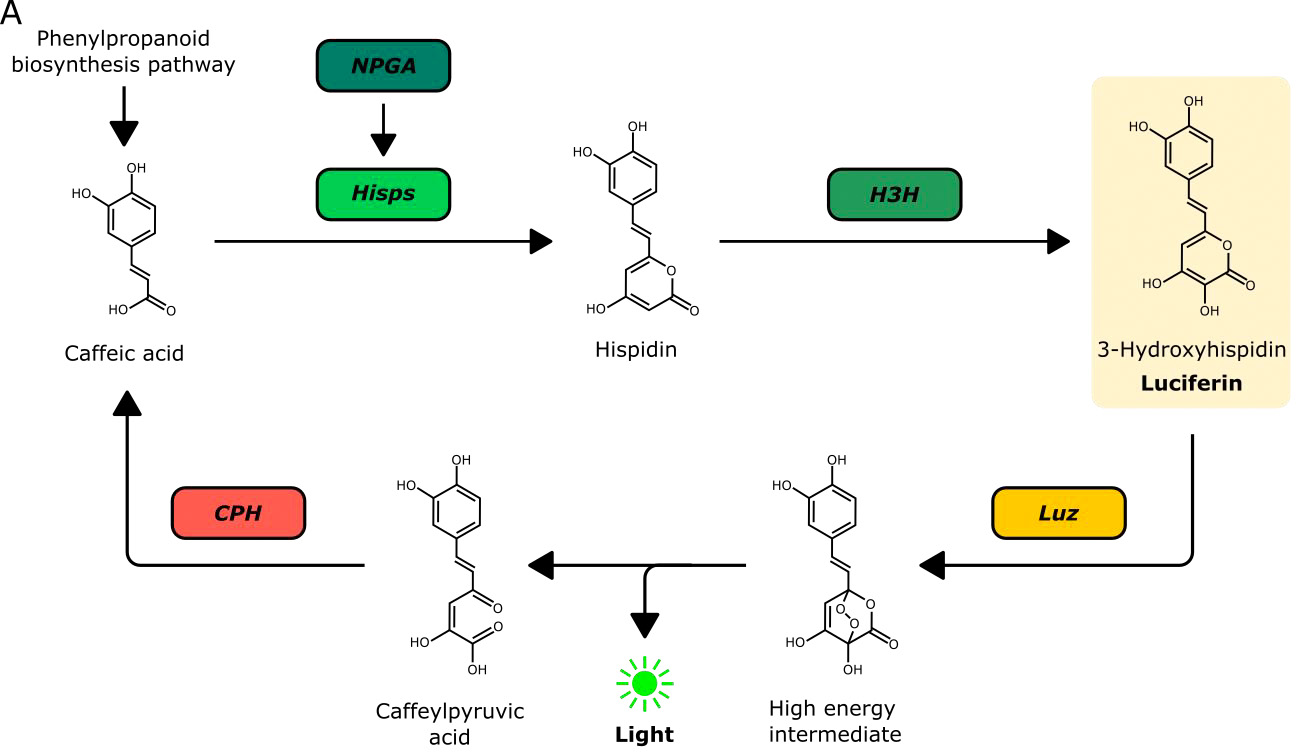 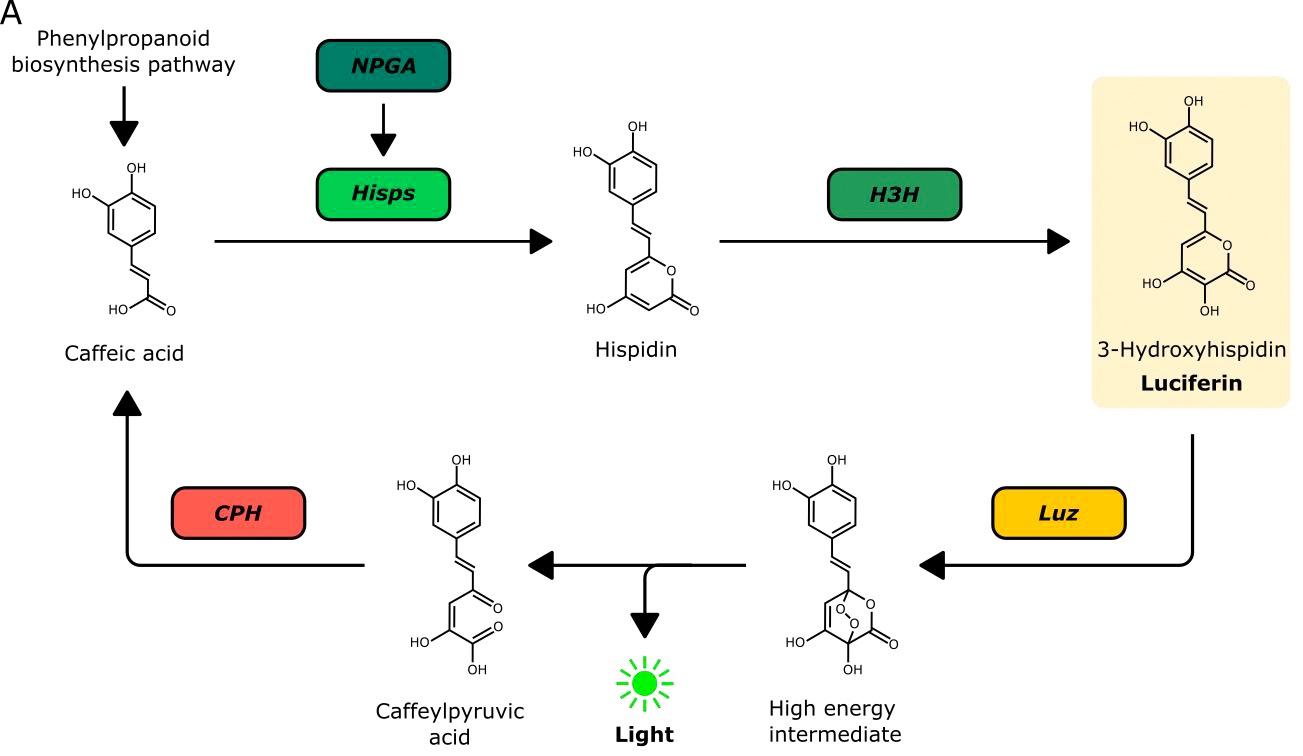 Caffeic acid is an intermediate of the plant’s phenylpropanoid biosynthesis pathway and present in virtually all plant species. The authors of both preprints introduced genes encoding the enzymes of the fungal caffeic acid cycle into plants to test whether the pathway can be reconstituted in planta, thereby bypassing the need to externally supply luciferin. Transient expression of the enzymes in multiple plant species including tobacco, Arabidopsis and tomato resulted in auto-luminescence of the transformed organs. When the pathway was stably integrated into the tobacco genome, auto-luminescence was observed across the whole plant and throughout development. Mitiouchkina et al. further observed that luminescence varied across organs – over the time of day and strongly increased upon wounding – likely correlating with the activity of the phenylpropanoid pathway that generates caffeic acid.

The luminescence pathway developed in these preprints potentially represents a powerful reporter system. Khakhar et al. adapted this system to observe spatio-temporal changes in gene expression by expressing the fungal luciferase from selected promoters. Expression from the Petunia ODORANT1 promoter lead to exclusive auto-luminescence in flowers with a diurnal rhythm that peaked at dusk, in agreement with previous observations. Expression from the abscisic acid (ABA)-responsive AtRAB18 promoter on the other hand conferred strong increase in luminescence when plants were treated with ABA or dessicated, a stress known to boost ABA levels. None of these specific responses were observed when the luciferase was expressed from the constitutive 35S promoter, providing proof of concept that the fungal bioluminescence pathway (FBP) can be employed as a reporter system for gene expression.

Why we chose this paper

Many model organisms or cell lines are highly amenable to bioluminescence reporter systems such as the firefly luciferase. However, a major disadvantage of these systems is the requirement of exogenous substrate, particularly in plants where tissue permeability varies greatly. The preprints presented here represent an excellent solution to this problem by negating the need for exogenous substrate whilst providing a powerful and adaptable reporter system.

I am honoured you selected our pre print to highlight! Great job summarizing our papers. I think the only thing I’d add is we hope that the the tools we published, both the FBP pathways and imaging platforms, will lower the cost of using these reporters to broaden access to these tools, as well as the scale at which they can be applied.

As far as the open questions go, point 1 is a great avenue for a follow-up publication and is something we are currently pursuing.

For point 2, we would absolutely expect some variation from the native production level of caffeic acid, which is why we always pair our gene expression analysis with a constitutive promoter FBP trial in parallel to control for that.