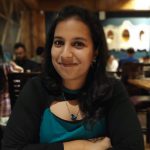 Colour polymorphisms are fascinating adaptations that help organisms avoid predation (1–3), gain access to mates (4), and thermoregulate (5,6). Cryptic colouration or camouflage can help organisms blend into their backgrounds. Further, some species exhibit discrete camouflaging morphs in a crypsis polymorphism. Complex adaptations such as colour polymorphisms are often maintained by balancing selection through various processes including negative frequency dependence (7), where rarer forms are advantageous; and sexual antagonism (8), where a trait differentially benefits the two sexes. The individual morph phenotypes can be inherited across generations as a single (9) or multi-locus (10) trait. At the genetic level, these could be governed by individual SNPs (11), differential cis-regulation of certain genes (12), transposable element insertion (13) and structural variation such as large-scale inversions (14) and indels (15). These mechanisms can give rise to alternate alleles that regulate the various morphs.

Grasshoppers and other Orthoperans show a notable degree of colour polymorphism, particularly crypsis. The desert clicker (Ligurotettix coquilletti), found across the arid region of Sonoran, Mojave, and Peninsular Deserts in Western USA, shows two cryptic morphs in both sexes. These comprise a uniform morph that has more or less homogeneous patterning, and a banded morph that shows contrasting light and dark bands across the body axis. These grasshoppers spend most of their lifetimes in creosote bushes, however, adult females oviposit on the desert floor, which makes them susceptible to attack from predators. In the preprint, the authors collected desert clickers from 20 sites across the species range, and estimated morph frequencies and their dependence on predation environment (bushes vs desert substrate). They identified dominance relationships between morphs and identified the processes that maintain these morphs across different populations. They also explored the genetic bases of this polymorphism with a novel approach using RADseq to detect structural variants associated with each morph.