Are small, genetically impoverished populations damned to extinction by default? Not so, suggests an exciting new study: large, genetically diverse populations that crash rapidly might be much worse off and end up with more harmful genetic mutations. 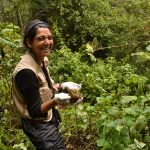 Conservationists have long touted the negative effects of small population sizes on genetic diversity and thus extinction risk in endangered species1. This makes sense: small populations should have lower genetic diversity and thus are more likely to have more deleterious or damaging alleles2. Yet we also know that many species have been living in small populations for centuries and still appear to be surviving. Several human populations, for instance, are thriving despite having genetic disorders resulting from the small founding population and subsequent limited partner selection pool in these communities3. So, what really determines whether a population is at risk of extinction? Is it its size? Rapid population decline? Or something else entirely? This study aimed to find out by examining the genetic load and abundance of deleterious mutations of 42 mammal species and correlated it with population size, genetic diversity, and conservation status in the wild.

The authors found no relationship between the conservation status and genetic load of these mammal species. Instead, genetic load seemed to strongly correlate with current population size. Surprisingly, they found that large rather than small populations have higher genetic load, i.e. have more mutations with potentially negative effects. This was unexpected as selection is expected to be less efficient in a small population. This was true, even in species that were closely related. If genetic load reflects very old evolutionary processes, one might expect that all primates or all rodents would have either very high or very low loads. They found that some species (like orangutans, bonobos, and Iberian lynx) that once had quite large populations but only recently declined have very high genetic loads. In these cases, the authors suggest that if a large population with high genetic load were to decline very rapidly, there is not enough time for the large number of potentially deleterious alleles to be removed via so-called purifying selection. Unexpectedly, they also found that some species that have experienced more inbreeding have lower genetic loads. Inbreeding is measured as the proportion of the genome that is identical, because it was inherited from parents that were themselves close relatives. Thus, these small populations that have experienced long-term inbreeding may have had enough time purge deleterious mutations.

Why this research is important:

These results have extremely important implications for conservation scientists. Conventional wisdom in the conservation community says that we should focus our efforts on those populations that have high genetic diversity so we can save as much genetic variation as possible for a species at risk. More often than not, larger populations tend to have higher genetic diversity and more evolutionary potential, i.e. the ability to adapt to a changing environment. However, these results suggest that sudden crashes in a population that is genetically diverse could end up leaving the survivors worse off than a smaller population that has had time to remove deleterious genes. What does this mean for current conservation strategies?

I chose this preprint because it challenges our conception of ideal conservation strategies for endangered species. It does so by examining the negative effects of population declines across a wide array of mammal species, which further strengthens the authors’ results. Few genetic studies are able to compare the results of inbreeding in so many distantly related animals. The paper uses visually appealing graphics to depict these results simply and provides detailed supplementary information on methods to allow for reproducibility. It also includes recommendations for reintroduction programs to carefully examine the long-term implications of rescue strategies, rather than the short-term band-aids we often resort to in the world of conservation science.

Response 1: Yes, we strongly believe that these results are applicable to a large number of sexually reproducing animal species. In fact, we have carried out the same analyses in birds and have replicated all the patterns described in this pre-print.

Response 2: Small populations are subject to stochastic processes, which is completely independent of genetic factors. Thus, small populations of long- and short-lived mammals are both at risk of extinction before any genetics kicks in. However, it has been shown by others that large mammals  (who are frequently longer-lived than small-bodied species) are more at risk of extinction due to anthropogenic factors (among other things), as they are more frequently targeted by harvest and have greater requirements for habitat than small-bodies species.

Response 3: Yes, we absolutely believe that demography is key to what we see. We have not included estimates of fertility and/or mortality in our calculations, because many of these factors are strongly correlated with population size, which seems to be a very good proxy for many life-history traits. However, it would definitely be interesting to investigate the effects of different life history traits on genetic load.