Article now published in Molecular Biology and Evolution at http://dx.doi.org/10.1093/molbev/msy154 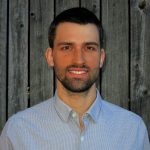 Understanding the genetic underpinnings of phenotypic divergence and local adaptation is a fundamental goal of evolutionary biology. In a huge undertaking that combines morphological and physiological measurements alongside whole genome sequencing of over 300 Atlantic killifish collected from the Potomac River and Chesapeake Bay, Reid Brennan and colleagues have made major headway towards identifying the genetic basis of local adaptation along a riverine gradient. Upstream habitats were characterized by oxygen-rich freshwater, while downstream estuary sites were saltier and more hypoxic. By combining two methods of genomic analysis – an association study that links genes to phenotypes, followed by a selection scan to determine which genetic regions are favoured by natural selection – the authors identified sets of genes that were both under selection in different habitats and linked to population level differences in osmoregulation, hypoxia tolerance, and metabolic rate. Particularly interesting was the finding that the three physiological variables measured were not correlated with one another and were linked to non-overlapping sets of genes, suggesting these traits are independently under selection.

I was really impressed by the sheer effort required to collect a broad range of phenotypic and genomic data on several hundred individual fish. Furthermore, by working across levels of organization and linking genomic data to whole-animal physiological traits, the authors present a comprehensive picture of freshwater colonization by killifish. These results indicate selection on key pathways that have long been hypothesized to be important for adaptive divergence between fresh and brackish water habitats.

The modularity of the three physiological traits that were measured is curious given recent reports suggesting that traits such as hypoxia tolerance and metabolic rate are often linked. Perhaps this trait independence is key to the broad environmental/geographic range (e.g. eurythermal, euryhaline) of Atlantic killifish?

I was initially surprised that “only” 16 SNPs popped out as phenotypically important and under selection, but is this really a low number to detect given that many genes of low effect are responsible for whole-animal traits? Future studies examining other environmental transitions and different species are needed before we have a sense of how many SNPs under selection would be “normal”.

Several ionoregulatory genes were found to be under selection in freshwater-adapted killifish, leading the authors to develop a hypothesized “sodium uptake metabolon” that would increase sodium ion uptake from the environment and minimize paracellular loss. Looking back, Andrew Whitehead said “I wish we had measured sodium uptake as a trait. We’ll have to save that for another study.”