Geometric principles underlying the proliferation of a model cell system

In a recent preprint, Wu et al. study cell-wall compromised bacteria and show that chromosome positioning and segregation is controlled by their geometry. 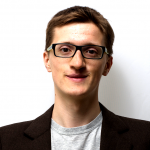 The cell wall is evolutionary ancient and almost ubiquitous in the bacterial domain. It protects the contents of bacterial cells and largely determines their shape. About 30 genes contribute to the synthesis of cell wall material and its spatiotemporal regulation. Surprisingly, many bacteria that normally have the wall can grow and divide in its absence. The cells with compromised cell wall, L-forms, are an excellent model system for studies of the effect of cell size, shape and confinement on intracellular organization. Furthermore, the study of cells with compromised cell wall is of relevance for the development of novel antibiotics, as they often target the cell wall.

Previous work from this lab has shown that L-form growth in Gram-positive B.subtillis requires two types of mutations: i) one leading to excess membrane synthesis and ii) one that counteracts the damaging effect of reactive oxygen species that are present at elevated levels in L-forms. Interestingly, it is not clear why the reactive oxygen species occur [1,2]. Upregulation of membrane synthesis can be achieved by mutations affecting the regulation of fatty acid synthesis or indirectly by inhibiting peptidoglycan precursor synthesis. Previous studies have shown that division in L-forms is haphazard, poorly regulated, with often anucleate divisions and occasional nucleoid bisections [3]. Nevertheless, such phenotype still permits sufficient number of cells to successfully divide and results in colony growth.

The current model of division in L-forms assumes that it is driven by an imbalance between cell volume and surface area. The relative simplicity of this phenomenon makes it an attractive option for division in artificial cells and appears as a likely possibility for division of primordial cells. The systematic study of L-form divisions has been hampered by experimental issues related to time-lapse imaging of cell-wall compromised L-forms. In this paper, the authors report on the use of a novel microfluidics device for imaging elongated L-forms over extended time spans. Strikingly, they observe that the ability of cells to segregate chromosomes faithfully and symmetrically is recovered by imposing external constraints on their shape.

B.subtillis cells without a cell wall achieved robust and accurate chromosome segregation under lateral confinement that is similar to native cell width. This definitely dismisses the role of cell-wall associated phenomena in chromosome positioning. It seems that more relevant are the considerations of surface/volume, cytoplasm/nucleoid , DNA/protein and membrane/cytoplasm ratios. The authors observed a transition to regularly spaced nucleoids after both: i) initial seeding of the channel when nucleoids would overlap and ii) after passing through a region of the channel that was wider and which led back to a narrow region (diamond like shape). Despite their ability to reliably segregate chromosomes, L-forms rarely divided, even in elongated channels. The doubling time of L-forms further increased in wider channels.

Chromosome positioning was disrupted in L-forms in the absence of tight external confinement. Chromosomes formed clumps that split only infrequently. More detailed inspection of video sequences showed that the nucleoids (or clumps thereof) show dynamic patterns of splitting and coalescence. This points to a direction of future research as the liquidity of the nucleoid suggests that it is a phase separated condensate. Nucleoid area and nucleoid centroid-to-centroid separation increased in parallel with increasing channel width, due to a failure of nucleoids to segregate and space out in wider channels. Nucleoids became wider, roughly linearly with the linear increase of channel width.

The authors observed that the division was strongly biased to inter-nucleoid spaces. This further supports “simple” biophysical and entropic arguments for chromosome segregation and positioning. Furthermore, division was successful even in cells without nucleoids. They observed the oval/sphere like objects would shed off from a cell body even at an end where there was none or little DNA. Interestingly, abolishing DNA synthesis lead to increased division frequency (in the absence of DNA) even in narrow channels that previously did not support division. This suggests that the nucleoid acts as a barrier to division. Furthermore, the authors observed that pole-localized nucleoid, resulting from asymmetric L-form division, will rapidly translocate to the midcell. They argue that such rapid response may necessitate an active repositioning mechanism.

Why I Think This Work Is Important